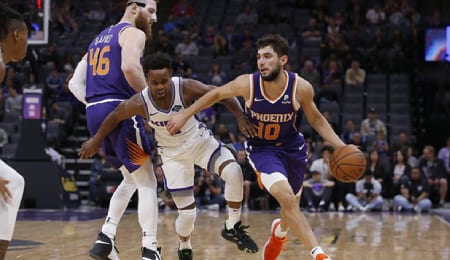 Aron Baynes (left) will be setting plenty of picks for the Suns. (AP Photo/Rich Pedroncelli)

Welcome back to another season of Fantasy basketball waiver wire picks. As always, as opposed to recommended dudes that you don’t have a prayer of actually picking up, we will be focusing solely on players that are actually available in your leagues (maximum 50 per cent ownership in ESPN and CBS leagues).

This week, the Warriors were embarrassed in the opening of their new arena; two-time scoring champion James Harden had an awful shooting night to open the season thanks to the Bucks’ D; and Phoenix centre Deandre Ayton has been suspended 25 games because of testing positive for a diuretic.

And now, let’s get to our first batch of Fantasy basketball waiver wire picks for the 2019-20 season…

Aron Baynes, C, Phoenix Suns (ESPN: 0.3 per cent; CBS: 5 per cent): Someone is going to have to absorb minutes in the wake of Ayton’s suspension, so Baynes stands to earn extra PT. It’s been nearly two years since Baynes was last on our radar as a Fantasy recommendation, and that worked out okay as despite some poor FT shooting, he was a solid source of boards and he shot very well the following month. He didn’t see much action in the season debut, a blowout win over Sacramento, but you can expect those minutes to rise now. Baynes is generally a very good FT shooter for a big man and his leadership skills are welcome on a young Suns’ squad. The former Celtic plays a traditional low-post game, so he’s limited in what he can offer, but if the minutes are there, you can expect help in boards and scoring. However, unless your league credits your players from being posterized, just keep Baynes away from Joel Embiid (see video below).

Daniel Theis, C/PF, Boston Celtics (ESPN: 0.3 per cent; CBS: 3 per cent): Theis is another big with possible short-term given news that Enes Kanter (knee) is out this weekend. Theis may be a decent DFS pick, assuming he sees an uptick in minutes over the next couple of games. He got a few more touches last season, and we’re expecting even more this season with Boston short of size. Theis is likely to struggle against quicker bigs, so his value is capped, but we’re curious to see what he’s capable of doing with 20 or more minutes of action. UPDATE: Theis will be out of action Saturday with a sprained ankle; should Kanter miss more time, keep an eye on Theis.

George Hill, PG, Milwaukee Bucks (ESPN: 1.7 per cent; CBS: 12 per cent): Hill looks like he’s going to provide value as the Bucks’ sixth man this season, and the fact that he went a team-best +16 in season opener underscores how valuable he is to this team. Always a solid free throw shooter, he flirted with a double-double on Thursday, and it’s looking like he’s going to get much more PT than he received after getting dealt to Milwaukee last season. Hill’s an athletic guard, but has generally been limited by his defense, so coming off the bench suits his game better.

Danuel House Jr., SG/SF, Houston Rockets (ESPN: 0.5 per cent; CBS: 5 per cent): A smart defender, House Jr. logged a team-high +10 in the Rockets’ season-opening loss. He enjoyed a nice uptick in minutes in his first season in Houston, but now that he’s been inserted into the starting lineup over Eric Gordon to begin the season, that PT should rise further. Still, House will need to shoot better to offer value, so for the time being we recommend picking him up only in deep formats, and watching him in standard size leagues.

Elfrid Payton, PG, New York Knicks (ESPN: 10 per cent; CBS: 49 per cent): Payton’s play this season — along with co-point guard Frank Ntilikina — is a big key to the Knicks’ hope to improve. Payton flirted with a double-double in the opener, adding five steals. Last season, he put up more treys than ever, and if that continues this season, he’ll offer value in this category as well. Considering how much the 2014 10th overall pick has bounced around, he really needs to step up his game to find himself a long-term home.

Kendrick Nunn, SG, Miami Heat (ESPN: 5.2 per cent; CBS: 35 per cent): Miami’s backcourt suddenly looks like a strength, and a big part of it is the play of rookie Nunn. The kid can sink buckets, baby.

Josh Hart, SG, New Orleans Pelicans (ESPN: 6.3 per cent; CBS: 32 per cent): Hart had to shut it down early with a knee injury last season, but has come to play for his new team this season — especially on the glass. He got a double-double in the opener, and then just missed another on Friday (16 points, nine rebounds).

Allonzo Trier, SG, New York Knicks (ESPN: 1.0 per cent; CBS: 4 per cent): We recommended Trier in early March, and despite some poor shooting, his numbers were solid down the stretch. He barely played in the season opener, and then went off for a team-high 22 points on Friday, doing a bit of everything to keep the Knicks in the game and help spark a second-half comeback that fell just short.

American funk god Roy Ayers has now been performing for almost 60 years. Among his more popular compilations was 2003’s Virgin Ubiquity (Unreleased Recordings 1976-1981). The lead track from this release is “Boogie Down,” featuring the sensual voice of Carla Vaughn, who was also known for her work with Earth, Wind and Fire.

By RotoRob
Tags: Aron Baynes
This entry was posted on Saturday, October 26th, 2019 at 2:20 pm and is filed under BASKETBALL, RotoRob, The Wire Troll. You can follow any responses to this entry through the RSS 2.0 feed. Both comments and pings are currently closed.