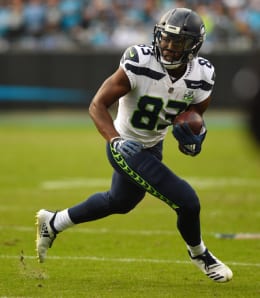 David Moore is a sleeper for Week 11. (Pro Football Rumors)

Seattle Head Coach Pete Carroll better change his number because Rams Head Coach Sean McVay has it. Seattle will now head home to face Kyler Murray and the Cardinals, fresh off their comeback win over Buffalo.

Love: Following reports of Tyler Lockett‘s injury, David Moore is an attractive slot receiver against the stingiest perimeter defense in the league. We’ve already seen the chemistry Moore has with Russell Wilson, even if it happened in garbage time (see video below).

Hate: D.K. Metcalf is likely to be stifled by Patrick Peterson and should be treated as a touchdown-dependent WR2.

Pittsburgh’s receiving absolutely decimated the Bengals’ secondary and now gets an even softer matchup against the Jaguars. We’re hard pressed to imagine much offensive production from Jacksonville’s skill positions.

Love: D.J. Chark has the best matchup on paper and will be the primary beneficiary of garbage time.

Hate: James Robinson has the worst matchup on paper and even worse projected gamescript.

Detroit Head Coach Matt Patricia finally got the message: start the fresh legs over the undead corpse of Adrian Peterson. The Panthers are likely to be without the Christian McCaffery again.

Love: D.J. Moore is set to explode again as Detroit features one of the worst secondaries next to Dallas and Seattle.

Hate: Marvin Jones proved us wrong last week, but we’re again projecting a difficult time for him against a sneaky good pass defense.

New England (4-5) has a viable route to the playoffs and it always plays its best after Thanksgiving. We’re once again projecting Deshaun Watson to go wild with a double scoop of Will Fuller and Brandin Cooks.

Love: Cooks’ revenge narrative is on as he faces the surprisingly anemic Patriot defense.

Hate: Jacobi Meyers balled out the last couple of weeks, but expect Houston’s decent underneath cover to lock him down.

Following a humiliating defeat at the hands of Philip Rivers, the Titans have a bruising date with the Ravens (who will perhaps be without Calais Campbell). Lamar Jackson needs to be a better thrower before Baltimore gets better.

Love: Titan TE Jonnu Smith presents the safest way to advance against this bully of a pass defense.

Hate: Corey Davis rebounded from his dud — perhaps not monstrously — but the buck stops here again.

It’s 2020, and the Eagles are now a joke. And the Browns? Contenders. Nick Chubb continues to show why he is one of the best pure rushers in the league.

Love: Jake Elliot might be the highest scorer on the Eagles’ roster come Sunday.

Hate: Jalen Reagor has a very high ADoT and is limited by his quarterback. The Browns will bring elite pressure.

Coming off a bye, Matt Ryan and the Falcons have a chance to get Calvin Ridley back. Drew Brees is likely to be placed on IR and the quarterback situation should be closely monitored.

Love: Assuming he’s getting the majority of the snaps over Taysom Hill, Jameis Winston is going to make so many people uncomfortable with his W eating.

Hate: Todd Gurley is a touchdown-dependent RB2 with a bad matchup.

Joe Burrow got stomped by Pittsburgh’s elite defense and will probably get stomped by Washington too. Last week, Alex Smith had more passing yards than any QB and will look to do it again against a gashed secondary.

Love: Logan Thomas has been quiet the last couple of weeks, but he could hit his ceiling this week.

Head Coach Adam Gase will face off against the Chargers in an epic bout of who can lose most. The Jets have not won a game yet and the Chargers love shooting themselves in the foot.

Love: Mike Williams, while he isn’t exactly a diamond in the rough, should have a monster ceiling game.

The Dolphins stunned the Chargers in another epic in Miami and Tua Tagovailoa will head to frozen Mile High against a pass-funnel offense. With tails between their legs against getting ravaged by the Raiders, the Broncos are likely to lose again.

Love: Dolphin WR Jakeem Grant once again makes our worksheet as a DFS champion against a pass-funnel defense.

Hate: Melvin Gordon is probably done as a factor for 2020: overhanging legal issues; non-performance on the field; drinking issues; and Phillip Lindsay.

Coming off bye, Dallas is likely to get Andy Dalton back. Not that it matters since Dalvin Cook, Justin Jefferson and company are likely to run over the ‘Boys on their way to Week 12.

Love: Amari Cooper should re-emerge as the alpha receiver on Dallas.

Hate: Ezekiel Elliot has a good matchup on paper, but we’re reluctant to buy into the Dallas offense.

After narrowly escaping with a win last week, Aaron Rodgers and the Packers have the surprise upstart Colts on deck. If Rivers and the running game can sustain drives, the defense is capable of winning the matchup outright.

Hate: Aaron Jones is more likely to be stifled by the Colts’ run defense than not. We are solidly betting against the Packers here.

The rematch against the Kingdom of Kansas City and the Rebel Raiders will feature a shootout between Patrick Mahomes and Derek Carr.

Love: Tyreek Hill has found his stride since the last time these teams met and we expect him to go ballistic.

Hate: Clyde Edwards-Helaire is likely to be on the shelf this week as the Chiefs need to play faster and more efficiently.

Jared Goff and McVay roasted the Seahawks and now face the stiffest test of the year in the Bucs. Tom Brady looked a lot better throwing the ball last week, but still missed Antonio Brown on a long touchdown.

Love: AB looks great even after missing two years of football; he led the team in air yards and targets on Sunday.

Hate: The timeshare of Cam Akers, Darrell Henderson and Malcolm Brown will be stopped by Tampa’s elite defense.

Ludwig van Beethoven’s early period lasted until around 1802. Here’s one of his best pieces, “Bagatelle,” being performed rather well by a child.

By Lucas Chan
This entry was posted on Tuesday, November 17th, 2020 at 8:39 pm and is filed under FOOTBALL, Lucas Chan, Worksheet. You can follow any responses to this entry through the RSS 2.0 feed. Both comments and pings are currently closed.