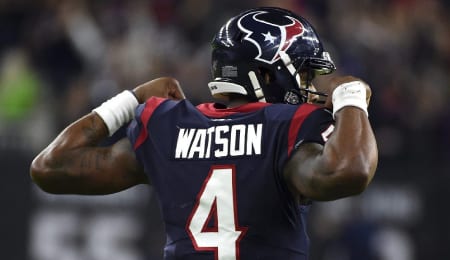 Deshaun Watson and the Texans never gave up the lead after second quarter against the Patriots, and he really exposed New England’s secondary (see video below). This will be an ugly stomp by the Texans as the Lions can’t get it together and enjoy a solid offensive and defensive game in the same week.

Love: If Kenny Golladay is unable to suit up, Danny Amendola will have another big day as Matthew Stafford‘s security blanket.

Hate: Duke Johnson has yet to perform two weeks in a row. He’s on the final straw.

Winning off the backs of Antonio Gibson and Terry McLaurin, Washington hopes to steal the NFC East crown against a reformed Dallas defense. The Cowboy offense will have its hands full.

Hate: On top of ongoing chemistry issues with the quarterback, Amari Cooper has a tough matchup this week.

With Lamar Jackson suffering through a putrid season, the suddenly reeling Ravens will now travel to 10-0 Pittsburgh to renew one of NFL’s best rivalries. The Steelers will do what they do best: smash-mouth run game complimented by a tough-as-nails defense.

Love: Mark Andrews rebounded from his nine duds following Week One and we forecast him to be the primary chain-mover in this one.

Hate: Jackson can’t read defenses, or throw, so he’s sure going to have a time tough surviving in Pittsburgh.

The Chargers barely held on over the New York Jets last week. Head Coach Anthony Lynn will need to allow Justin Herbert to throw this week against Josh Allen and the Bills.

Love: Zack Moss has been the primary red zone back and will be featured over Devin Singletary, especially if trailing.

Hate: Hunter Henry has exploded. But that won’t carry into this week as Buffalo’s athletic linebackers are likely to lock down the middle of the field.

The Titans are proving everyone wrong as they beat up the Ravens en route to another surprising contender in the Colts. Bring your popcorn, this is our game of the week.

Love: The Revenge narrative is on as despite putting up a dud last time he faced them, A.J. Brown is projected to roast the poor Colts’ secondary.

Hate: Nyheim Hines has starred in Head Coach Frank Reich‘s “hot-hand” approach to the back field but expect the running back to get shut down by the Titans’ physical defense.

Minnesota is proving every bit the false gold as it promised to be. Still, we believe the Vikings are a more complete team than the Panthers right now.

Love: On paper, D.J. Moore has a good matchup regardless of who his quarterback is.

Hate: Justin Jefferson will have a bad time against an already good pass defense that’s looking to shut down any deep threats.

After defensively slaughtering the Eagles, the Browns will now travel to Jacksonville for another sackfest against Jake Luton and his inept line. No survivors.

Hate: D.J. Chark is a sit consideration as Cleveland will bring heat at Luton and he will have less time to throw towards the boundary.

The Giants have now cleared most of their hard schedule games, so should have the battle-readiness to absolutely annihilate the Bengals. Meanwhile, budding star Joe Burrow is done for the year after his offensive line failed to protect him once again last week.

Love: The Giants’ defense makes an appearance on this list after Burrow’s torn ACL.

Hate: Tyler Boyd was on pace to be a WR1 but that’s been scuttled by Burrow’s injury. Lower your expectation to a volume-based WR2.

Swallowing an ugly interception to lose the game, Kyler Murray will get a stiffer matchup against Stephon Gilmore and the secondary. Cam Newton routed the Ravens for a win two weeks ago, so there’s hope.

Love: Jacobi Meyers is on deck this week as the Patriots are likelier to feature a slot receiver against the Cardinals’ stingy perimeter defense.

Hate: Kenyan Drake is a likely regression candidate as he was a volume based RB2. Expect him to score 10-14 points in PPR.

Tua Tagovailoa and company should just absolutely rip through this New York defense whether on the ground or in the air. Surprisingly, Joe Flacco has played well and should give the Fins enough trouble.

Love: Jakeem Grant makes our list once again as his stats have been solid since Preston Williams was injured.

Hate: Miami Dolphins have rightfully enjoyed the accolades of having the toughest pass defense in the league but don’t count Flacco out yet. Therefore, Miami’s D/ST isn’t as attractive an option this week as you’d think.

Following a narrow loss to Kansas City Sunday night, Derek Carr and the Raiders will look to rebound against the Atlanta Falcons and their asinine pass defense. Blown out by the Saints, Matt Ryan and his offensive staff have much to answer for.

Love: Henry Ruggs III has been quiet since his injury, but the Falcons’ pathetic pass defense will present a golden opportunity for him.

Hate: Hayden Hurst laid a goose egg in Week 11, and with Julio Jones and Calvin Ridley likely to suit up, Hurst will be on the shelf.

With Drew Brees banged up, Taysom Hill filled in admirably, leading the team to a win. The Broncos presents a challenge on both sides of the ball. We expect Head Coach Sean Payton‘s coaching to guide the Saints to a narrow win.

Love: Noah Fant should have himself a day against inauspicious Malcolm Jenkins and a defense that coughs up Fantasy points to tight ends.

Hate: Alvin Kamara is in store for a bad day on the ground and in the air too now that Brees is out. The jury is still out on how Kamara will fare with someone besides Brees under centre.

Losing just about everyone on the offensive side of the ball has left the 49ers’ Fantasy landscape barren. Conversely, the Rams’ receiving corps is on fire, with both Cooper Kupp and Robert Woods shredding the Bucs’ secondary on Monday.

Love: Kupp is an all-star play this week as San Francisco is insistent on giving up big yards over the middle of the field.

Hate: Darrell Henderson Jr.. Despite the rankings, we see plenty of red flags, so if you really want to use him, you’re on your own.

Patrick Mahomes was electric on Sunday, beating the Raiders in a classic two-minute situation to win the game. Tom Brady is in for a harder game than he anticipates as Kansas City’s pass defense has stepped up. What’s happened to his second-half magic? Over the last four seasons, the old man is now 5-15 when his team trails at halftime.

Love: Rob Gronkowski might work up some repressed muscle memory against his formal rival.

Hate: Clyde Edwards-Helaire has an extremely stiff matchup on the ground and in the air as Tampa sports the best linebacker corps in football.

Coming off its bye week, Chicago is still dealing with management and coaching woes. Rumours of the team working out DeShone Kizer further cements the Bears’ frustrations with their QB situation. Aaron Rodgers has to bounce back from an embarrassing loss to the Colts.

Love: Anthony Miller is an enigma, but we’re willing to bet on him this week as Green Bay should be focused on stopping Allen Robinson.

Hate: Aaron Jones lands here because he has a tough divisional matchup, but also because we hate the Packers around here (well, for clarity, Lucas hates them; RotoRob loves them).

After beating Arizona, the Seahawks travel to Philly, but Russell Wilson isn’t Superman anymore. Carson Wentz is the polar opposite of Superman (Superdog?) and we can only hope he plays better.

Love: Travis Fulgham makes his appearance in the right column this week as Seattle has major flaws in the secondary.

Hate: Wentz might be washed. Tiniest of violins to those still clinging onto him over Jalen Hurts.

English prog rock supergroup Asia formed in 1981, and despite a three-year break in the mid to late ’80s, are still at it today. In 1982, it released its eponymous debut, and the second single from this effort was “Only Time Will Tell,” giving Asia a second top 10 hit on the US Hot Mainstream Rock Tracks chart.

By Lucas Chan
This entry was posted on Wednesday, November 25th, 2020 at 2:42 pm and is filed under FOOTBALL, Lucas Chan, Worksheet. You can follow any responses to this entry through the RSS 2.0 feed. Both comments and pings are currently closed.