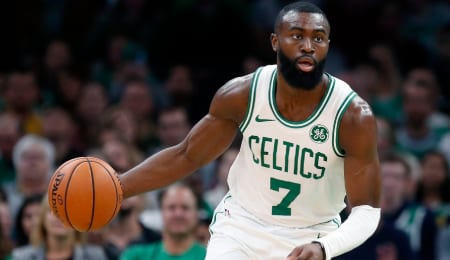 There was a lot to like about the Boston Celtics’ 2019-20 season. Despite a truncated schedule that had them play 10 fewer games, they came within one win of matching their 2018-19 total (an improvement of a whopping 69 points in winning percentage) and rose to third place in the Eastern Conference.

The offense went from middle of the pack to a top 10 unit, while the defense — already very good the season before — became elite, surrendering the second fewest points per game in the NBA.

Boston parlayed these improvements into another nice playoff run, sweeping Philadelphia and then knocking off the defending champion Raptors in a hard fought series to reach the Eastern Conference Finals — for the third time in the last four years.

Unfortunately, the Celtics struggled to contain Jimmy Butler and Bam Adebayo, losing to Miami in six games, so are still trying to get back to the NBA Finals for the first time since 2009-10 and remain without a title since 2007-08.

The team’s core is young and generally still improving, with more talent on the way, so the Cs are poised for a consistent run as a contender, but given their luxury tax issues, it wouldn’t be a surprise to see Gordon Hayward dealt (assuming he doesn’t opt out).

As we already alluded to, tons of things went right for the Men in Green last season, but really everything has to take a backseat to Jaylen Brown‘s meteoric rise from solid support player to potential All-Star. Despite dealing with various injury issues throughout the season that wound up costing him 15 games, he sunk way more buckets while flashing nearly across the board gains. His emergence gave Boston’s offense a real three-headed monster with Kemba Walker and Jayson Tatum. Need a reminder of Brown’s bag of tricks? Check out the video below…

Speaking of Tatum, it’s nearly impossible to characterize his season as anything but a resounding success, but if we’re going to nitpick, he had the worst free throw shooting performance of his young career. This dude has future MVP written all over him, but he’ll need to get back to the 85+ percentage range to truly reach that elite level, especially as his trips to the charity stripe rise. Returning to the FG shooting touch he showed as a rookie would help too. But let’s get real, the fact that Boston landed this dude — and another first round pick — by trading down two spots in the 2017 draft now looks like one of the smartest plays the organization has made in recent years. Tatum’s showing down the stretch and in the postseason clearly answered anyone that questioned whether he deserved to be an All-Star last season.

Speaking of shooting, after making serious strides with his shot in 2018-19, Marcus Smart really regressed last season. Now, let’s make this clear: we absolutely love what he brings to the table in terms of energy, hustle, smarts and his all-around skills. Smart can be on our team any day. But after making such progress both inside and beyond the arc two seasons ago (career bests 42.2 FG percentage including 36.4 per cent from downtown), he slipped substantially in both areas despite putting up career-best numbers in other categories. Exacerbating this issue is the fact that Smart hoisted way more shots than ever before, shattering his career highs in both FG and three-point attempts per game. Still, given Smart’s versatility — he spent most of the season starting, but was Boston’s most reliable bench option when he wasn’t — he remains an extremely valuable option for Boston, but less so in Fantasy basketball, because of these weak percentages and his somewhat injury-prone nature.

Ludwig van Beethoven‘s compositions began in the classical period and carried on right through the romantic era in classical music. Here’s his “Triple Concerto in C Major, op. 56,” performed by Israel Philharmonic.

By RotoRob
This entry was posted on Saturday, October 24th, 2020 at 10:22 am and is filed under BASKETBALL, Good Bad and Ugly, RotoRob. You can follow any responses to this entry through the RSS 2.0 feed. Both comments and pings are currently closed.