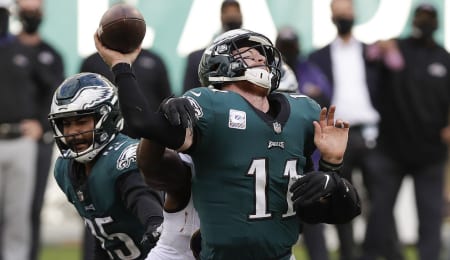 Sunday features a lot trap games… contests that are likelier to go against the spread. We recommend all Fantasy owners pour their stock into a handful of games with scoring upside, i.e., Cleveland at Cincinnati, Green Bay at Houston and Detroit at Atlanta. Start your studs in the other games, but choose streams from these ones.

Is Michael Thomas‘ return enough for the Saints to keep pace with the Panthers in a race for the NFC South crown? We don’t think so.

Love: D.J. Moore is set to bounce back from his flat score last weekend against a middling defense without shadow coverage from Marshon Lattimore.

Hate: Thomas is likely to return after injuring his ego, but has a sneaky tough matchup against a superb pass-funnel zone scheme.

This could shape up to be the Jets’ best chance at winning a game. Should they? Maybe not; Josh Allen will have a get-right game against New York.

Love: Frank Gore, in stride with the revenge narrative against his old team, faces a Buffalo defense ranked 28th against the run and 24th against the pass.

Hate: Devin Singletary, in spite of expected garbage time production, will face a surprisingly solid Jets’ run defense that has thrived even in allowing the seventh most attempts by opposing running backs.

A sneaky Fantasy landscape, Browns vs. Bengals will field many viable streamers in a matchup that could end up being a shoot-out.

Love: Tee Higgins is the favourable outside receiver to target against Cleveland’s ailing secondary.

Hate: Joe Burrow will face an incredible stout front four, apt at stopping the run and the pass. ‘

Robbed of a Dak Prescott-led season, Dallas bent over to the Cardinals and endured a 38-10 beating behind limp-rifle Andy Dalton. Kyle Allen and his team should make good work of Dallas’ defense.

Love: J.D. McKissic has averaged seven targets and 50 per cent snap counts after Week Two and now faces the softest defense in the league.

Hate: Dalton has a chance to set an all-time sack record against Washington’s defense. Expect the former Redskins to send the dogs.

The intuitively highest scoring slate of the week features two of the most capable offenses in the league. Deshaun Watson will need to rally behind his receivers to overcome Aaron Jones‘ date with Houston’s run defense.

Love: Jones against the Texans’ run defense. Can it get any sweeter?

Hate: Davante Adams scares us this week because unless Houston manages to run up the score on Green Bay, there is no need to risk his health against a defense that largely stifles big receiving plays.

This is the friendliest slate to high-owned Fantasy players, so expect both offenses to meet or exceed expectations against their putrid defensive counterparts.

Love: D’Andre Swift finally showed up last week and now enters a smash spot against the second worst defense in the league against both the run and the pass.

Hate: T.J. Hockenson looks to be relegated to the redzone. With Adrian Peterson and Swift performing well in OC Derrell Bevell‘s run-first offense, Hock is a touchdown-dependent tight end.

Both teams will attempt to run the ball effectively and rely on their respective defenses before opening up to the passing attack. Ryan Tannehill and the Titans will face their harshest test yet.

Hate: Derrick Henry goes from facing the worst run defense in the league to quite possibly the best. Expect him to generate fewer than four yards per carry.

Division games are unpredictable to begin with, but when it comes to the Seahawks and Cardinals things can be downright random. We are forecasting a score of 13-10 Seattle in an effort to be contrarian.

Love: Christian Kirk/Andy Isabella will have a day against a secondary almost as bad as the Cowboys. Both these receivers will have deep looks during this game.

Hate: Kenyan Drake, despite the excellent box score, is poised to fall back down to earth against a run defense that’s not great. With game-script headwinds, he may be outscored by Chase Edmonds this week.

Patrick Mahomes took a back seat to the running game during last Monday’s downpour. Denver will have a hard time keeping up with him and his offense.

Hate: Clyde Helaire-Edwards owners, high off their own fumes, will need to come back down to earth as Le’veon Bell enters the picture against a stifling Denver run defense.

Two interesting but under-performing teams now clash with respective young, but productive, quarterbacks. In what appears to be a very kicker-friendly game, expect a lower score line than Las Vegas indicates.

Love: Mike Williams found a connection with Justin Herbert and now faces one of the worst perimeter pass defenses in the league.

Hate: James Robinson will find himself against a stacked box for most of the day as the Chargers will force Gardner Minshew to beat them with his arm.

Two of the most disappointing teams in football clash off in a bout of great coaching and bad execution. Cam Newton needs to explode against an average 49ers’ defense that got roasted by Ryan Fitzpatrick.

Love: James White collected 7-of-8 targets from Newton in the loss against Denver. Expect White to be involved in the offense against a similar defense.

Hate: We promise our life savings that HC Bill Belichick has a defensive play called “Bracket 85” meaning double coverage on George Kittle and jam everyone else off the line. Kittle is touchdown dependent this week.

Tampa Bay’s pass rush looked unstoppable against the Packers, so we’ll have to see if the Raiders — coming off a bye week — took notes and have an answer to help protect Derek Carr, who’s in the early stages of a career year.

Love: Henry Ruggs, against Tampa’s pass funnel defense, has the speed and hands to convert deep shots from Carr — similar to what the Chargers’ Tyron Johnson did to the Bucs.

Hate: Josh Jacobs is now in the middle of the gauntlet against top-notch run defenses. Against Tampa Bay, expect him to rack up fewer than four yards per carry and be a touchdown-dependent RB2.

This game shapes up to be a defensive choke. Both offenses are prone to mistakes and will turn the ball over in the week’s least Fantasy friendly contest.

Love: David Montgomery is emerging as a low-end RB1 in terms of usage and performance after Nick Foles stepped in. Look for Montgomery to continue capitalizing on his opportunities.

Hate: Cooper Kupp has been asked to block an absurd amount and we hated on him last week. He now faces a stiffer test against Chicago’s second-ranked pass defense.

Born Steven Demetre Georgiou, Cat Stevens (now known as Yusuf Islam, is one of the greatest songwriters of all time (even if he struggles to find a name for himself). His song “The Wind,” which was originally released on 1971’s Teaser and the Firecat, found its way onto the soundtrack for Almost Famous.

By Lucas Chan
This entry was posted on Wednesday, October 21st, 2020 at 8:34 am and is filed under FOOTBALL, Lucas Chan, Worksheet. You can follow any responses to this entry through the RSS 2.0 feed. Both comments and pings are currently closed.