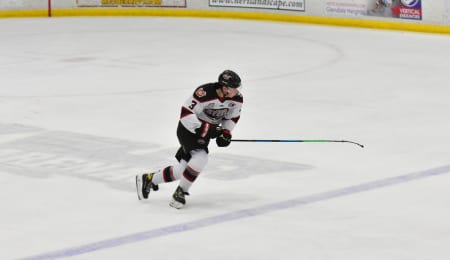 Ian Moore’s journey to the NHL moves him to the USHL this season. (Chicago Steel)

RotoRob recently sat down to talk with NHL prospect Ian Moore, who was recently selected by the Anaheim Ducks in the third round (67th overall) of the 2020 NHL Draft.

The 6’3″ blueliner was listed at 165 pounds last year, but has now beefed up to 185. Coming off a tremendous final season of high school hockey for St. Mark’s (Massachusetts) in which he racked up 46 points in 34 games, he’s beginning his first campaign with the Chicago Steel of the USHL. Moore is committed to play at Harvard University next season.

It’s clear from the video below that Moore is a tremendous passer, intercepting the puck and then saucering a perfect lob onto Erik Middendorf‘s stick for a gorgeous assist.

Among the topics we discussed with Moore were:

Check out our entire conversation with this engaging young man below.

Among our personal faves, English prog rocker band King Crimson got its start in 1968 and despite several breaks, is still at it today. In 1981, it released its eighth album, Discipline, the band’s first effort in seven years. The disc’s second track was “Frame by Frame,” co-written by Adrian Belew, Bill Bruford, Robert Fripp and Tony Levin.

By RotoRob
This entry was posted on Friday, October 30th, 2020 at 11:10 am and is filed under HOCKEY, Interview, Prospects, RotoRob. You can follow any responses to this entry through the RSS 2.0 feed. Both comments and pings are currently closed.