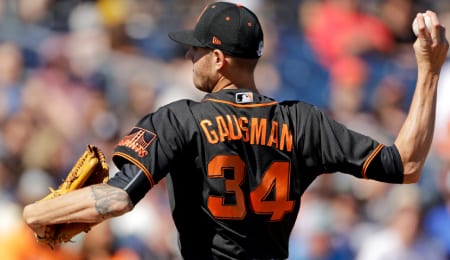 Welcome back to another week of Fantasy baseball. We’re now into late-August and nearly at the season’s halfway point (for the non-Covid-striken teams, that is), so keep working that wire.

This week, Stephen Stasburg‘s season is suddenly in doubt because of carpal tunnel syndrome in his pitching hand; the Mets are the latest NL team to be afflicted with Covid-19, causing a postponement of this weekend’s scheduled Subway series; and Cleveland Manager Terry Francona remains away from the team after a medical procedure.

Kevin Gausman, SP/RP, San Francisco Giants (ESPN: 29 per cent; CBS: 43 per cent): We were bullish on Gausman as a multi-inning reliever, recommending him just over a year ago. Unfortunately, it wasn’t our best call as he was ripped in August (6.14 ERA), but somewhat vindicated us by finishing strong (3.65 ERA in September). Signed by the Giants this winter, Gausman has found himself as a full-time rotation member again, and despite his less-than-stellar bottom line numbers, he’s actually pitching better than ever. After flaming out with the Braves and then being used in relief in Cincy, his command has been phenomenal this year and he’s whiffing batters at a way higher rate than ever before, thanks to a split-change that just dives off the table (see video below). Is it possible that the fourth overall pick from 2012 — who has certainly shown flashes before — has finally come of age? It’s worth grabbing Gausman to find out.

Clarke Schmidt, SP/RP, New York Yankees (ESPN: 2.3 per cent; CBS: 15 per cent): The injury-prone Yanks have been nailed again with James Paxton headed to the IL, but it could mean Schmidt will finally get his shot in the Yankee rotation. Schmidt looked really impressive in Spring Training, so it may be time to see what the 24-year-old righty can do in the Show. The Yankees’ first round pick in 2017 (16th overall) has a tremendous slider, helping him move up last year to Double-A, where he went undefeated and averaged a strikeout per frame in a late-season look. Schmidt is a better dynasty option, but could provide a surprise boost in redraft leagues should he be promoted, which seems likely at some point this season.

Brendan Rodgers, 2B, Colorado Rockies (ESPN: 5.4 per cent; CBS: 21 per cent): There have been plenty of prospects recalled this week, Rodgers among them. PT may be an issue for him at first, but he did manage a two-run single in his season debut Thursday before taking an 0-for-5 with two Ks Friday. Rodgers struggled to hit with any power in his first taste of the bigs last year, but if he can take over second base on a regular basis, he’ll be an asset playing in the hitter’s paradise that is Coors Field. He slipped to No. 53 in our Top Prospect Rankings this year after an injury-filled 2019 and poor MLB debut, but he still has an excellent hit tool (.350 BA in limited time at Triple-A last year), although doesn’t offer much speed for a middle infielder.

Tyler Wade, 2B/SS, New York Yankees (ESPN: 0.4 per cent; CBS: 1 per cent): It’s been over three years since we last touted Wade, but he’ll get another shot to be Fantasy relevant now that Gleyber Torres (hamstring) is on the IL (joining fellow middle infielder DJ LeMahieu). On Thursday, Wade paid immediate dividends with a double and a run. He hit better last year, but so far this season has mostly been used as a late-inning defensive replacement with precious few at-bats. Once upon a time, Wade seemed to destined to be a Fantasy relevant super sub, and while he’s hardly washed up at age 25, his chances are dwindling, so this is a great opportunity for him to add value in deeper AL-only leagues while he tries to cement his status as a big leaguer.

American Hip Hop group Arrested Development got its start in 1988, and after a four-year break, is still at it today. In 1992, the band released its debut album, 3 Years, 5 Months and 2 Days in the Life of… From this effort comes “U,” a tune that samples Ramsey Lewis‘ take on “Mighty Quinn.”

By RotoRob
Tags: Kevin Gausman
This entry was posted on Saturday, August 22nd, 2020 at 11:14 am and is filed under BASEBALL, RotoRob, The Wire Troll. You can follow any responses to this entry through the RSS 2.0 feed. Both comments and pings are currently closed.