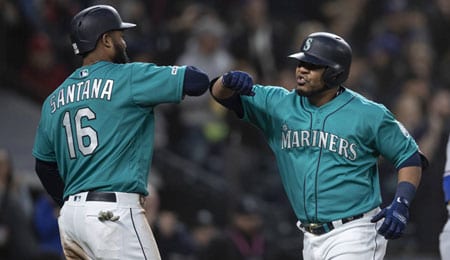 Edwin Encarnacion (right) has been a bright spot on a dreadful Seattle team. (AP Photo/Stephen Brashear)

Given where they are now, it seems like it’s been a really long time since the Seattle Mariners roared out to a 13-2 start, becoming the first team in MLB history to go yard in each of its first 15 games.

That start was even more shocking considering the team had gutted its roster over the winter. We’re not sure we wouldn’t have bet a billion dollars that this kind of start was impossible.

By the time another six straight losses were suffered in late-May, this team was nine games under .500. And heading into action Tuesday, the Mariners are 28-41 — despite taking two of three from the Halos this weekend.

So, what the hell caused such a rapid return to earth to start, and then digging themselves a hole to the cellar, where they are now, sitting six and a half games back of third place?

Well, let’s start by looking at who is not to blame, namely DH Edwin Encarnacion, who has been out of his mind lately, smashing seven homers in nine games this month, and three over the last two (including his 400th career bomb — see video below). Injuries limited him to 500 at-bats with Cleveland last year, but he’s more or less been healthy this season, and — oh man — his power sure has not been affected by the move to Safeco. With 20 jacks already, EE is on pace to bust his career high… not bad for a 36-year-old.

As far as things that have not gone so well, yes, injuries have been an issue for Seattle. New closer Hunter Strickland went down in the first week of the season and no one has been able to seize the job and run with it. First baseman Ryon Healy, who was hitting a bit better this year, has been out since late-May with a back injury. Starter Felix Hernandez was getting lit up like never before and landed on the IL with a lat injury in mid-May.

Reliever Sam Tuivailala, who was quite effective after landing in Seattle last year, has yet to pitch this season because of an Achilles injury. Shortstop J.P. Crawford, who was just starting to figure out MLB pitching, suffered an ankle injury late last month. Mitch Haniger, one of the team’s top power bats, had a testicle ruptured (yikes) and is currently out indefinitely. Second baseman Dee Gordon, hitting better this year, is also out after suffering a wrist injury in late-May.

This has all helped turn a promising start into the dismal situation Seattle currently finds itself in.

Japanese starter Yusei Kikuchi got off to a fine start in his first MLB season, but has been shelled in losing each of his last three starts — failing to get through the fourth inning in any of them.

Hitting hasn’t been a problem for Seattle this season, but with a 5.29 team ERA, only Baltimore is worse in the entire majors. The bullpen has been awful (5.09) and the rotation (5.45) has been even worse. To make matters worse, the Mariners have the worst fielding in the majors.

Still, there have been some bright spots, such as backup catcher Tom Murphy. He smacked two dingers Sunday, giving him homers in three straight and four of the last five games. Murphy already has a career high in runs and may finally be enjoying that long-awaited breakout season.

First baseman Daniel Vogelbach has also been a pleasant surprise. Given more PT than ever before, he’s responded with a nice mix of power and patience.

It’s shaping up to be a long season in Em City, but should the Mariners become sellers as we near the deadline, they do have some decent pieces to move in order to help supplement their rebuild. Seattle’s moves last winter upgraded a very thin farm system into one of the game’s better ones. Adding to that this summer could set the Mariners up for good things a few years down the road.

American folk punkers Violent Femmes first hit the scene in 1980, and despite taking a couple of breaks along the way, are still at it. In 1993, the band released Add it Up (1981-1993), a compilation album. From this effort comes “Country Death Song,” originally released on 1984’s Hallowed Ground.

Now it’s your turn. Let us know in the comments below how you think the Mariners will do this season.

By RotoRob
Tags: Edwin Encarnacion, Seattle Mariners
This entry was posted on Tuesday, June 11th, 2019 at 12:11 pm and is filed under BASEBALL, RotoRob, The Wire Troll. You can follow any responses to this entry through the RSS 2.0 feed. Both comments and pings are currently closed.