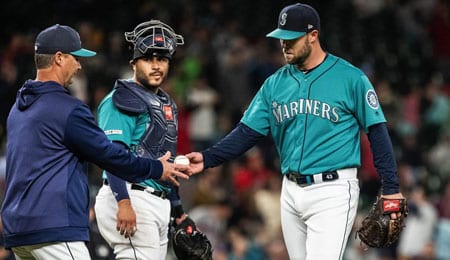 Welcome back to another week of Fantasy baseball. We’re now just five days away from the MLB in Omaha event, which will see the Tigers square off against the Indians. Sound exciting? Uh, ya…

This week, Dallas Keuchel finally found a new home, signing with the Braves; Max Kepler snapped an 0-for-21 skid in a big way on Thursday, mashing three homers; and new Cub Craig Kimbrel should be ready to pitch in the bigs in about three weeks.

Hunter Strickland, RP, Seattle Mariners (ESPN: 7.8 per cent; CBS: 33 per cent): Strickland got off to a mixed start, earning saves in the first two games of the season before getting shelled in his third outing and leaving with a lat injury. He’s nearing a return now, having thrown a bullpen on Thursday and scheduled to toss another one on Sunday before he heads out on a rehab assignment next week. With the Mariner closer situation still muddled, Strickland has a great chance to step right back in and earn some saves. Hard contact and walks are his bugaboos, so even at his best he’s a shaky option (see video below for him facing the music after a failure), but if you’re trolling for saves, you should stash him now.

Roberto Perez, C, Cleveland Indians (ESPN: 0.8 per cent; CBS: 7 per cent): Need some catching help in an AL-only league? Try Perez, who has homered in three straight games. He hit so poorly last year that he was useless from a Fantasy perspective, but has improved in that regard this season while showing more power than ever (he’s already reached a career high in dingers). You can do worse than Perez, who looks headed for a career year.

Carlos Martinez, RP/SP, St. Louis Cardinals (ESPN: 23.2 per cent; CBS: 48 per cent): The chances of Martinez returning to starting to save the rotation this season seem slim, but it could happen. Either way, he’s looking sharp pitching out of the pen, earning a hold and a save over the last four appearances, with two straight perfect outings to wrap up this stretch. You may recall that C-Mart acted as the Cards’ closer down the stretch last season, so there’s history there. Could he ascend to that role again this year? It’s worth monitoring.

Garrett Cooper, OF, Miami Marlins (ESPN: 1.8 per cent; CBS: 20 per cent): Cooper was never hyped coming up, but could wind up being one of the more pleasant surprises of the 2019 season. Over the last 20 games, he’s slashing .329/.409/.539 with five jacks in 76 at-bats. In his first look with the Fish last year, Cooper offered next to no extra-base pop (.030 ISO), but he’s turned that around in a big way this season. Could this home run power be real? Two years ago, he smoked 17 long balls in just 75 games at Triple-A, so yes, it could very well be for real.

Framber Valdez, SP/RP, Houston Astros (ESPN: 0.2 per cent; CBS: 17 per cent): After looking solid through 14 relief appearances this season, Valdez gets his first starting assignment on Saturday at home against the woeful Orioles. He threw four shutout frames against Seattle in his last outing, and after making five starts last season will finally get his first crack at the rotation in 2019. Actually, Valdez hasn’t looked quite as sharp this year despite an improved walk rate, so it will be interesting to see how effective he is in the rotation.

Stevie Wilkerson, 2B/OF, Baltimore Orioles (ESPN: 0.4 per cent; CBS: 2 per cent): With Dwight Smith Jr. (concussion) out, Wilkerson — recalled from Triple-A earlier this week — is getting everyday playing time for the O’s. After making his MLB debut last season and struggling to generate much pop (.065 ISO), Wilkerson has bounced back and forth between Triple-A and the bigs this year, hitting with much more power in his second crack. He’s also upped his BA significantly, although judging by his .323 mark at Triple-A, there’s still more upside in this regard. At any rate, consider Wilkerson a short-term option in deep AL-only leagues.

Antonio Senzatela, SP/RP, Colorado Rockies (ESPN: 1.5 per cent; CBS: 8 per cent): Don’t ask him to deliver a hit (0-for-18 this year), but Senzatela is quietly starting to turn his season around on the mound. After another quality start Friday (his second straight win), he’s now given up three or fewer earned runs in five of his last six outings. Senzatela’s value is somewhat limited given a much lower K rate this year, but as a streaming or deep NL-only league option, he’s worth a look.

Pablo Lopez, SP, Miami Marlins (ESPN: 4.6 per cent; CBS: 41 per cent): Lopez is not a pitcher that will dominate opponents with his stuff, and he’s been a bit inconsistent, but he’s looked fantastic in three of his last four starts, including six shutout innings against the Brewers on Tuesday. He had a respectable rookie effort last year in making 10 starts, and despite his weaker record this season, he’s actually pitched better than his ERA suggests. Lopez is surrendering slightly more flyballs this year, but his HR/FB rate has improved. There’s quite a bit of upside here, but be prepared to endure the odd stinker as he figures things out.

Welsh singer Bonnie Tyler has been crafting hits since 1975. In 1983, she released her fifth album, Faster Than the Speed of Light, which was her major breakthrough effort. The fourth single from the album was “Straight From the Heart,” a cover of the Bryan Adams‘ hit.

By RotoRob
Tags: Hunter Strickland
This entry was posted on Saturday, June 8th, 2019 at 5:17 pm and is filed under BASEBALL, RotoRob, The Wire Troll. You can follow any responses to this entry through the RSS 2.0 feed. Both comments and pings are currently closed.