Can Detroit Defense Declaw the Falcons? 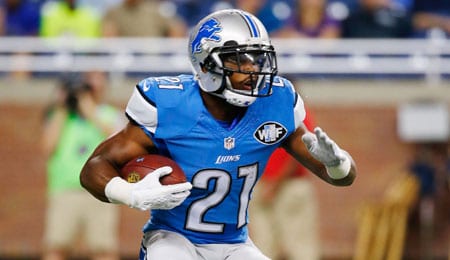 Ameer Abdullah could have his hands full in Week Three against Atlanta. (YouTube)

Two of the remaining four undefeated teams in the NFC will square off Sunday when the Atlanta Falcons visit Detroit to take on the Lions. These are two teams that looked like serious contenders all of last season before the Lions sputtered down the stretch, whereas the Falcons went all the way to the big game and came oh so close to their first championship.

Interested in finding out how their Super Bowl chances look this season? Sports Betting Dime has created this neat NFL graph that plots every team’s odds.

Let’s take a closer look at each team heading into Sunday’s showdown, which on paper looks like the best matchup of Week Three.

For the Lions, QB Matthew Stafford is off to a blazing start. For a dude that had sunk outside of the top 10 a couple of years ago, this is a great turnaround as he’s now back in the discussion of being a top five Fantasy quarterback.

After completing 15 of 21 passes against the Giants on Monday, Stafford’s completion rate is up 71 per cent for the season, a figure which would easily surpass his career best of 67.2, set in 2015. Hell, we’ve seen some betting odds that have him listed as the co-favourite to win the NFL MVP this season!

How about running back Ameer Abdullah’s turnaround in Week Two? He was held to 30 yards on 15 carries in the season opener, but broke out for 86 yards on 17 totes on Monday. Heading into 2015, he was barely a top 40 running back, but he’s now a top 20 player at the position, making him a decent RB2 choice in standard leagues.

Better yet, with Dwayne Washington out this week, Abdullah could see more touches, however, make no mistake, this isn’t a great matchup for him.

Defending NFC Champion Atlanta is also off to a 2-0 start under Head Coach Dan Quinn, who will now have to game plan for Stafford’s ability to avoid the pass rush (see video below for a perfect example of this).

Strangely, this is the third straight game the Falcons have taken on an NFC North team as they look to continue beating up the division. And if Stafford has designs on winning the MVP, he’s going to have to wrestle the award away from Atlanta’s pivot, Matt Ryan.

Ryan came so close to leading the Falcons to a title last year, but he’s off to a slightly sluggish start. His pass percentage is down slightly, but of greater concern is that he has only two touchdown passes after a career-best 38 last season. Ryan is still considered a top five Fantasy quarterback, but this is not an ideal matchup considering how much better Detroit’s D has been early on. The Lions have already racked up six sacks, three forced fumbles and four interceptions. Considering they only forced nine fumbles and had just 10 picks all of last season, this turnaround has become one of the league’s biggest early season storylines.

Detroit’s run D may have been a bit fortuitous so far, so don’t hesitate to use Devonta Freeman as you normally would. He, too, turned things around this week after a tough debut. With three touchdowns already, Freeman is on pace to more than double his career high, which would make him an even more integral part of this high-powered offense.

As of this writing, Atlanta is slightly favoured to remain undefeated after this clash, but it will be very fascinating to see how the Lions’ improved D stacks up against such a tough offensive machine.

Now it’s your turn. Let us know in the comments below how you think this game will play out.

By RotoRob
Tags: Atlanta Falcons, Detroit Lions
This entry was posted on Saturday, September 23rd, 2017 at 4:16 pm and is filed under FOOTBALL, Game Preview, RotoRob. You can follow any responses to this entry through the RSS 2.0 feed. Both comments and pings are currently closed.