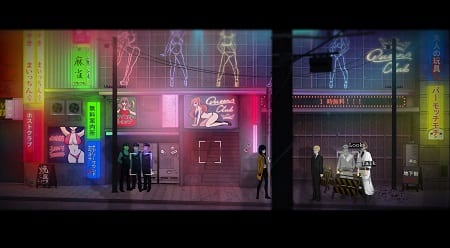 Tokyo Dark is a hybrid in many ways. Playing like a cross between a visual novel and point-and-click adventure game, it was also made by developers from both Western and Eastern backgrounds. Can it balance these elements like sides of the same coin, or does the hybrid process simply water things down?

Handling like a very basic point-and-click game, Tokyo Dark feels almost archaic. For whatever reason, manually walking via the keyboard isn’t allowed, requiring all inputs come solely from the mouse. This also means there is no controller support, which seems like an odd choice given the adventure games influencing it feel more in line with TellTale’s ilk than, say, Maniac Mansion.

Tokyo Dark is drawn in an anime style, though one that feels a little different than typical anime games. There are fewer exaggerated proportions and the less cartoonish look fits better with the grimy world. Male characters tend to be rather bland, though perhaps none are prominent enough to have been worth the effort unlike the lead character and villain, both women.

In addition, the game features interaction boxes when near objects, which sometimes blend in a bit too well and can be hard to see.

Musically, Tokyo Dark doesn’t particularly stand out, though it does have a few tracks that set a suitably mysterious mood. These satisfy more than the generic tracks that play when involved in the more mundane areas. Players can expect plenty of scenes with lots of creepy ambient sound effects, especially when anything remotely horrific is occurring.

In fact, it probably jumps into the lunacy a bit too fast. It’s hard to buy into some of the story elements that want players to doubt Ito’s sanity when it never establishes a sense of normalcy. So, of course, when the supernatural elements start cropping up, they appear to be real and the only viable way for the story to progress.

The game places a heavy emphasis on choice, reflected in story changes as well as a somewhat unwieldy stat system. Ito has four categories to monitor: sanity, professionalism, investigation and neurosis. And collectively, those stats affect your endings as well as how characters perceive you.

Sanity is typically reduced when delving into the story’s supernatural elements and can be regained by taking pills or doing normal and healthy activities. Professionalism is a measure of how detective-like players act. For instance, there’s a choice early on to flirt with a skevy man for information — while you might get the 411 needed it will hurt your standing as a cop.

Investigation simply tracks behaving like a smart detective, with it usually only being reduced by taking Ito’s sanity medication. Lastly, neurosis is a bit of an odd duck, with its bearing on the story being a hard to gauge.

It can be lost by repeatedly inspecting something or talking to someone over and over again, and regained by doing calming activities like playing with Ito’s cat when she’s home. It’s a clever trick to dissuade typical adventure game behaviours like talking to NPCs until you exhaust all dialogue, but its implementation needs work.

Tokyo Dark is fairly light on puzzles, with the few that pop up solved relatively quickly. Instead, it mainly wants to engage players on how they react to obstacles. More than a few locks can be shot off with Ito’s gun, damaging the professionalism stat, while more patient players will want to backtrack and find a key or lock-pick.

However, how most of these choices really affect things doesn’t become too clear until the end, and even then it can feel a little vague. Developer Cherrymochi clearly wants repeat playthroughs, including locking one ending behind a second attempt, though the world and characters didn’t feel intriguing enough to revisit much.

Tokyo Dark is a solid debut title featured by the Square-Enix Collective, though publishing games that are good but lacking polish or the budget to really nail its objectives has become somewhat of a running theme. There’s potential here, let’s hope it gets nourished.

By Brian Gunn
Tags: Maniac Mansion, Square Enix, Telltale, Tokyo Dark, Video Game Review
This entry was posted on Monday, September 25th, 2017 at 3:12 am and is filed under Brian Gunn, Video Game Reviews. You can follow any responses to this entry through the RSS 2.0 feed. Both comments and pings are currently closed.