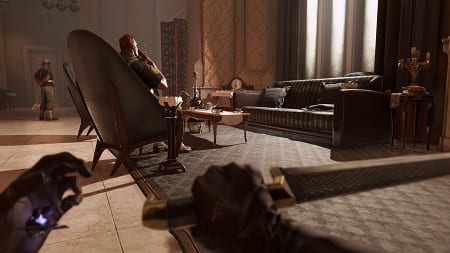 Thanks to its consistent quality across two full releases and a pair of additional DLC offerings, Bethesda’s Dishonored series has earned its place among the top first-person adventure games out there. Now, a little less than a year after the launch of Dishonored 2, we’re getting the standalone expansion Death of the Outsider, which carries on the series’ tradition of stellar content.

Everything in Death of the Outsider handles like you’d expect, allowing you to succeed in the oft-difficult realm of first-person stealth and, to a lesser extent, melee combat. Your blade is mapped to your right trigger while an array of secondary weapons and abilities reside on the left — holding down the left bumper brings up a radial menu, and the d-pad can be used for quick selections.

It’ll be second nature for series veterans and easy to learn for anyone jumping in. While the game is still built around stealth, you’re presented with more freedom than in Dishonored 2 as you’re not obligated to keep enemies alive for storyline purposes. It helps alleviate the feeling that any misstep must be cured by loading a previous save and reduces the need to clear sections flawlessly.

Another difference is that your void energy replenishes on its own, eliminating the need to collect elixirs and encouraging you to use your three powers (displace, foresight and semblance) with abandon. Of the three, foresight is the most indispensable as it allows you to explore an upcoming area and permanently mark your targets, which makes things more enjoyable that the constant toggling of dark vision.

Things are still a bit spastic and dicey when combat devolves into swordplay, and we struggled with the timing of parrying blows. That led to lots of mashing the right trigger as fast as we could and hoping our enemy died first. It’s inelegant to say the least.

Like a lot of Bethesda games, Death of the Outsider doesn’t have eye-popping graphics, but it does a great job of offering a world that’s lovingly created and grounded in excellent levels of detail. While there’s no singular area as breathtaking as the Clockwork Mansion, the areas you do visit in Karnaca feel varied and are fun to explore.

Character models are decent enough, but it would’ve been nice to get a little more variety and also more obvious differentiation between hostiles and civilians at distance without using foresight. It doesn’t feel like there’s a lot of voice acting on offer, but what’s included is well done, and both the soundtrack and effects are solid.

As a standalone story it isn’t great, but if you’ve played the preceding Dishonored titles and DLC this serves as a satisfying endpoint for everything we’ve seen so far. While it lacks the scope of the two main games, it easily dwarfs Knife of the Dunwall and The Brigmore Witches, checking in at around 10 hours and with a healthy serving of secondary content to pad that out.

Where it does feel more like DLC is in the lack of expanded powers. You’ll gather your full strength early on, and there isn’t a ton of upgrades to alter the experience even when you max them out. The game does liberally scatter around bone charms, which can be equipped to boost various abilities, but again they never feel like they’re making that much of a difference.

Missions can be tackled in multiple ways, allowing you to go unseen and nonlethal or take a much more aggressive approach in which bodies pile up in your wake — though again, the game isn’t really built for you to face down more than a couple of enemies at a time so some degree of caution is needed. There’s ample ammo and gadgets as well, so there’s no pressing need to conserve.

Within the elongated story missions lie the opportunity to fulfill contracts for extra coin. Some are pretty straightforward, such as busting up a brewery, while others are more complicated, like when you’re tasked with swiping some documents without altering or incapacitating anyone. There are also safes to open, paintings to find and bone charms to collect.

As noted, the chaos system, which previous games used to adjust difficulty under the hood based on how much chaos you created (mostly by killing people), is absent here. While we enjoyed the newfound freedom, it does have the unintended consequence of cheapening preliminary targets since there’s nothing to be gained or lost by how you handle them.

Completing the game opens a plus mode that allows Billie to use abilities found in Dishonored 2, and also a custom difficulty in which you can alter a number of options to create whatever level of challenge you see fit.

While it lacks the depth of Dishonored 2, Death of the Outsider is a well-crafted title that gives plenty of reasons to revisit the franchise. For longtime fans, it’s a must play.