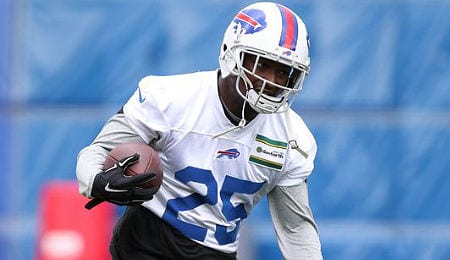 Welcome back to the 2015 RotoRob NFL Draft Kit. While you wonder how the Steelers will fare without Martavis Bryant (suspension), let’s turn our attention to the running game as we identify the top 50 running backs in Fantasy football.

While there is a ton of value to be found among running backs — especially given a very talented rookie class — the position is actually thinned out given the multitude of RBBC scenarios. Another big difference in 2015 is that identifying the absolute top tier is not as basic as usual. Eight, nine or even 10 of these dudes could wind up being top tier options. The top of the charts at RB is a much more crowded place these days.

Some key questions heading into 2015: Can C.J. Anderson build on his breakout season and solidify his status as an elite back? How will rookie Melvin Gordon fare as the feature back in San Diego? Can Tevin Coleman establish himself as the No. 1 man in Atlanta? How much rust will Adrian Peterson exhibit? Will Jamaal Charles start to slow with age?

1. Eddie Lacy, Green Bay Packers (5): Lacy is a perfect example that rookie running backs can succeed in the NFL. He’s now ready to be the man at this position, so we wouldn’t be shocked at all to see him going No. 1 overall in plenty of leagues. Lacy will score plenty of TDs in Green Bay’s high powered offense and, last year he stayed healthy in his sophomore effort, upping his average rush by a half yard, while becoming more involved in the passing offense (55 targets). That number should rise even more with Jordy Nelson out for the season. Maybe this pick doesn’t have as much upside as some, but it’s among the safest choices you can make. Besides, even in the virtual world, Lacy’s got some crazy moves (see video below). — RR

2. Jamaal Charles, Kansas City Chiefs (3): Charles is the main force that powers the Chief offense. If he stays healthy this year, he should surpass his yardage total from 2014. Last year, Charles missed one game for the second straight season, but he managed to stem his sliding average carry. He’ll definitely need to put up more first downs this year if the Chiefs are going to get back to the postseason. Simply put, he’s the most vital player in K.C., so needs to continue to be a stud for this team to be successful. — RR

3. Le’Veon Bell, Pittsburgh Steelers (10): A member of our 2014 NFL All Pro Team, Bell could easily rise up this list if the Steelers would feed him the ball a bit more often. He enjoyed a major breakthrough as a sophomore, getting more carries and doing a superb job of protecting the pigskin. The big issue here heading into 2015 is that Bell will miss three games with a suspension. — RR

4. Marshawn Lynch, Seattle Seahawks (6): Over the last four years, Lynch has 14 more touchdowns than anyone else. Just think about that for a moment. This dude does not need a fire lit underneath him to go into Beast Mode. Lynch’s touches have dipped the past two seasons and he also had slightly less first downs last year, but he remains one of the game’s top power runners. — RR

5. Adrian Peterson, Minnesota Vikings (2): Peterson’s return has Minnesota awash with high hopes for the Vikings in 2015. Last year, he rushed for 75 yards in his only game before a suspension wiped out the rest of his campaign. Before that, Purple Jesus had reached double digits in TDs seven straight seasons. Still, it’s not hard to wonder how much rust will show on this now 30-year-old’s game this year. — RR

6. Matt Forte, Chicago Bears (4): Forte is heading into his walk year, so if you’re a proponent of the contract year boost in performance, take note. Last year, he became a much larger part of the receiving game, helping offset regression in his running numbers. At this stage of his career, it’s probably prudent to assume Forte’s best days are behind him. — RR

7. LeSean McCoy, Buffalo Bills (1): We told you to sit McCoy in Week Eight and we hope you listened as he rushed just 20 times that week and failed to score, although he did manage 14 yards receiving. Now a Bill, he recently cancelled his big women-only bash, thinking it was going to get out of hand. The Eagles decided they couldn’t pay McCoy, and now he’ll try to improve upon last season’s paltry TD total and pathetic receiving yardage numbers. If he doesn’t, his Buffalo party may be over pretty soon, too.

8. DeMarco Murray, Philadelphia Eagles (8): People are understandably excited about the dynamic Murray joining Chip Kelly’s offense. Murray led the NFL with 1,845 rushing yards last season for the rival Cowboys and even if Philly runs the ball slightly less than Dallas, he should have another strong season in the NFC East. — MS

9. Carlos Hyde, San Francisco 49ers (50): With Frank Gore (finally) out of the picture, Hyde has a chance to run with the starting job in San Francisco. Hyde’s very brief stint on the non-football injury list should not be of concern to Fantasy owners, but he does need to improve on last season’s 4.0 yards per carry average. — MS

10. C.J. Anderson, Denver Broncos (NR): The running back on our 2014 Wire Troll All-Star team, Anderson broke through with double-digit touchdowns last year. Over the final six weeks of the season, there probably wasn’t a better Fantasy option in the entire game. Some may question whether Anderson has arrived as a top 10 back, but we’re confident in his ability to build on his breakout performance. — RR

11. Alfred Morris, Washington Redskins (9): Veteran Morris has learned to become a stud back in the NFL. He’s a sneaky runner and is the undisputed No. 1 man in Washington. Morris has never missed a game in his career, but as Washington has gone into the tank, he’s received fewer touches each season.

13. Lamar Miller, Miami Dolphins (23): After two underwhelming seasons, Miller rushed for 1,099 yards last year and looks poised for more improvement in 2015, even in a crowded Miami backfield. The Dolphins will be committed to the run after Ryan Tannehill was sacked relentlessly last year, but there are some legitimate concerns about the offensive line. — MS

14. Mark Ingram, New Orleans Saints (44): As long as Ingram stays healthy he’ll have a chance to make a big Fantasy impact for a team that has been shaken up quite a bit this offseason. He almost cracked the 1,000-yard mark in 2014 and should top it in 2015. — MS

15. Justin Forsett, Baltimore Ravens (NR): Forsett finally got the long-term commitment he was seeking after a breakout season in 2014. Playing on his fourth team in as many years, he busted loose for 1,266 yards and even at 29 he has plenty of spring in his step to be effective in Marc Trestman’s offense. — MS

16. Todd Gurley, St. Louis Rams (NR): Gurley, who has been compared to bruising Seahawks RB Marshawn Lynch, is recovering from knee surgery and it’s still unknown if he’ll be ready by Week One (he was just cleared to return to practice). But the No. 10 overall pick in this year’s draft has a chance to be a dominant bruiser once he’s fully healthy. — MS

17. Jonathan Stewart, Carolina Panthers (NR): For years, Stewart was looking over his shoulder at injury-prone DeAngelo Williams, but in the past few seasons the injury bug has bitten Stewart, too. Now, Stewart has a chance to shoulder the load in search of his second career 1,000-yard season (the other was in 2009). He’s a bit old by RB standards at 28, but he still has something left in the tank. — MS

18. Arian Foster, Houston Texans (13): Foster is certainly no stranger to the injury list, so we shouldn’t have been caught off guard when he went down earlier this month with a serious groin injury that will require surgery and could keep him out until the second half of the season. Last year, he stayed a bit healthier — enough so to have his most carries since 2012, and despite missing three games, he still set a career high in receiving TDs. Is Foster being punished because he’s a non-believer? That’s the kind of thing plenty of people in Texas might very well think. Hey, everyone’s entitled to their own beliefs, right? — RR

19. Melvin Gordon, San Diego Chargers (NR): The Chargers’ backfield has been a revolving door in recent years, but Gordon, a Heisman Trophy finalist last year, could be special. It may take time, but Gordon’s dream senior season at Wisconsin might just be a sign of things to come at the pro level. — MS

20. Joseph Randle, Dallas Cowboys (NR): Owner Jerry Jones appears to be all about the newly-acquired Darren McFadden, but until McFadden proves he can stay healthy and replace the departed DeMarco Murray, the door is open for anyone – particularly Randle – to make an impact. Last year, Randle performed well when given the opportunity, averaging 6.7 yards on his 51 carries. — MS

By RotoRob
Tags: NFL Draft Kit
This entry was posted on Saturday, August 29th, 2015 at 2:13 pm and is filed under 2015 RotoRob NFL Draft Kit, Cheat sheets, FOOTBALL, McCade Pearson, Michael Seff, RotoRob. You can follow any responses to this entry through the RSS 2.0 feed. Both comments and pings are currently closed.