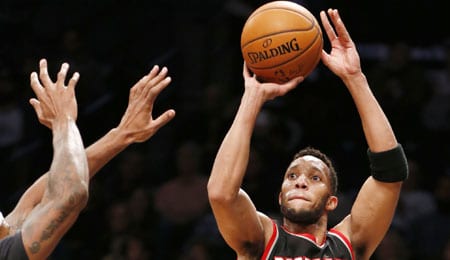 Evan Turner could provide a great boost for your team. (AP Photo/Kathy Willens)

Welcome back to another week of Fantasy basketball. We are now less than a month away from the end of the NBA regular season, so keep your foot on the peddle, peeps.

This week, Kevin Love (knee surgery) returned to the Cleveland lineup; Dwyane Wade will miss the rest of the season with a busted elbow; and Jordan Crawford, who we recommended last week, has impressed New Orleans enough to earn a two-year contract. If you saw this major career renaissance coming from Crawford, we’re guessing you were using U.S. sports betting apps, and if so, can you help us with our team, too?

Evan Turner, SG, Portland Trail Blazers (ESPN: 13.2 per cent; CBS: 39 per cent): It’s not often you have a chance to add a player with such a diverse skill set as Turner off the wire, but given that he’s been out with a broken hand for almost six weeks, he’s readily available in most leagues. Expected back in action Saturday, he may need a few games to shake off the rust, but here’s a dude that can help in several categories (especially with his passing skills; see video below), so go ahead and scoop him up if you need a guard.

Patty Mills, PG, San Antonio Spurs (ESPN: 16.2 per cent; CBS: 30 per cent): No, we’re not just recommending Mills because it was St. Patty’s Day this week, although that’s probably good enough reason. The fact is, he’s been starting for the Spurs lately with the team dealing with tons of backcourt injuries. This is likely just a short-term add, but while Mills is seeing the PT, he needs to be plugged in.

Solomon Hill, SF/SG, New Orleans Pelicans (ESPN: 1.1 per cent; CBS: 7 per cent): Hill absolutely exploded on Friday, scoring 30 points (helped by six treys), while adding seven assists, six rebounds and two steals. Woah. The 23rd overall pick from 2013 is getting more touches so far in March, so give him a look in deeper formats.

Nikola Mirotic, SF/PF, Chicago Bulls (ESPN: 20.6 per cent; CBS: 50 per cent): Just last week we reported that Mirotic had been yanked from the rotation, but he was slotted right back in on Monday and he responded with 24 points, following that up with 14-, and then 15-point efforts. His shooting touch still leaves something to be desired (9-for-26 over the last two games), but now that Wade is done for the season, there’s a golden opportunity for Mirotic to pick up some of that slack.

Skal Labissiere, C/PF, Sacramento Kings (ESPN: 9.8 per cent; CBS: 28 per cent): Who? Talk about a dude off the Fantasy radar, but Labissiere announced his presence with authority, going off for a career-high 32 points on Wednesday. This rookie has benefited from the trade of DeMarcus Cousins, but Labissiere seems to be really taking advantage of his extra chances now, so it’s time to add him.

Alex Len, Phoenix Suns (ESPN: 21.1 per cent; CBS: 43 per cent): Len (hip) returned to action Wednesday, taking a baby step with just 17 minutes of action (yet still flirting with a double-double), but ramped up to 28 minutes on Friday, putting up nine points, 10 boards, three steals, two blocks and two assists. If you need a big, grab Len and hope he stays healthy down the stretch as he’s capable of contributing some solid numbers.

By RotoRob
Tags: Cleveland Cavaliers, Evan Turner, fantasy basketball, Kevin Love, NBA, Portland Trail Blazers
This entry was posted on Saturday, March 18th, 2017 at 8:24 pm and is filed under BASKETBALL, RotoRob, The Wire Troll. You can follow any responses to this entry through the RSS 2.0 feed. Both comments and pings are currently closed.