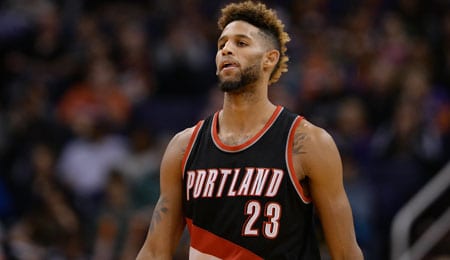 Allen Crabbe is a must-add if you need a guard. (CSN Northwest)

This week, Goran Dragic’s eye hit Cory Joseph’s elbow, an injury that will cost the Heat PG at least one game; Chicago has removed Nikola Mirotic from its rotation, so go ahead and dump him if you haven’t already; and Andre Iguodala has created a shit storm in Golden State with some racially insensitive remarks.

And now to this week’s Fantasy basketball waiver wire picks…

Allen Crabbe, SG, Portland Trail Blazers (ESPN: 9 per cent; CBS: 21 per cent): The points are starting to pile up for Crabbe, who has now reached double digits in five of his last six games. His shooting touch has been off the charts (60.5 per cent over the last five) — especially for a guard — he’s canning tons of treys and doing a decent job on the glass. Assists are not Crabbe’s thang, but he has enjoyed multiple dimes in two of the last three. He’s also shown a nice ability to cut to the hoop without the ball (see video below).

Jordan Crawford, SG, New Orleans Pelicans (ESPN: 0.8 per cent; CBS: 8 per cent): Recently signed to a 10-day deal, Crawford has paid immediate dividends for the Pelicans, canning 10 treys in three games en route to an average of 16 points. He’s even dropping dimes (six on Saturday) while shooting very well from the field. Crawford is fast and a great ball handler, so has a chance to really excel as New Orleans’ new sixth man. Grab him immediately.

Derrick Jones Jr., SF, Phoenix Suns (ESPN: 0.2 per cent; CBS: unowned): Strictly a flier option in very deep formats, Jones is getting a chance to start with Alex Len (hip) out. Jones pulled down seven boards Saturday, and he proved he could score in the D-League, averaging 14.5 points with nice block and steal numbers. While Phoenix is playing small ball, this kid is worth a look.

John Henson, PF/C, Milwaukee Bucks (ESPN: 2.4 per cent; CBS: 15 per cent): Henson has returned to the Bucks’ rotation after sitting on his duff for a few games, and so far, he’s delivered, flirting with low-end double-doubles despite averaging just 20 minutes over the last two. He’s actually seeing more action this season, leading to more touches, and while we’re still waiting for a return of his sophomore form, this is as close as we’ve come since.

Kosta Koufos, C/PF, Sacramento Kings (ESPN: 13 per cent; CBS: 23 per cent): At the end of January, we recommended Koufos, and while he struggled to get to the line last month, his ownership has gone up thanks to a huge March so far. After a dud in the month’s opening tilt, he put up three straight double-doubles, and then flirted with another on both Friday and Saturday. Koufos doesn’t get many touches, but he can finish when the rock gets in his hands (56.1 field goal percentage). Need a big? Give him a look.

David Lee, C/PF, San Antonio Spurs (ESPN: 13.2 per cent; CBS: 38 per cent): Any time Kawhi Leonard has been hurt, Lee has stepped up for the Spurs, and now that LaMarcus Aldridge is out, Lee could get to start for a little while. Lee recorded a double-double on Wednesday and then flirted with another one on Saturday despite seeing only 18 minutes. He’ll need more PT to be worth picking up in standard leagues, but as a deep league option, he’s worth considering.

By RotoRob
Tags: Allen Crabbe, fantasy basketball, Kosta Koufos, Portland Trail Blazers
This entry was posted on Monday, March 13th, 2017 at 5:35 pm and is filed under BASKETBALL, RotoRob, The Wire Troll. You can follow any responses to this entry through the RSS 2.0 feed. Both comments and pings are currently closed.