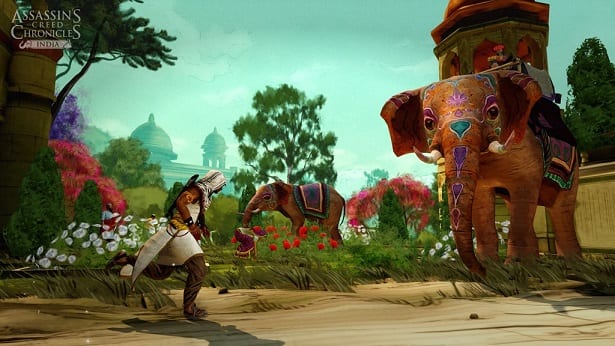 Chronicles’ colourful graphics do well on the Vita.

Released individually on consoles over several months, Assassin’s Creed Chronicles’ three adventures — China, India and Russia — have been combined and ported to the PlayStation Vita. While we already reviewed the games individually as they came out, we’re going to take a big picture view of the series and how well it translates to handheld gaming.

Despite offering a different take on the Assassin’s Creed series, Chronicles uses a familiar UI that shows your available actions tagged to the corresponding button in the upper right portion of the screen. Hold down the modifier to sprint and change your options.

The lone movement-based exception is the grappling hook that allows you to attach to certain surfaces and climb. It’s done by tapping the touch screen. The other touch screen functionality is Eagle vision.

All of the basics work pretty well, and even though the game actively dissuades combat with its ranking system its implementation of blocks, counters and weak/strong strikes is solid. Our only gripe there is sometimes enemies seemed to attack you while you’re actively attacking them, creating a scenario in which you cannot block their strike.

Where things don’t go as smoothly is with your secondary items. Each character has four of them mapped to the d-pad — three are unique, the other is a whistle to attract the attention of guards. To use these you’ll need to hold the d-pad in the corresponding direction and then use the right analog stick to aim it (or increase/decrease the area of effect for the distraction it’ll create).

If you’re not under pressure it’s just fine. You can take your time lining up your equipment and stun your enemies with a smoke bomb or cut a rope with throwing knives. When you have to be fast and precise, however, it feels really clumsy since the initial aim point is typically nowhere near where you want it. So by the time you line it up it may be too late.

There is one notable negative. Given that the game is in 2.5D it features a large number of shifts between the background and foreground. While it didn’t seem to come up in China, the latter two games have moments when it’s difficult to locate the transitions. Maybe that wouldn’t be the case on a full-sized TV, but on the Vita it can be.

Pick an element of the audio (voice acting, sound effects, music) and it’s decent without being memorable. It’s not a big deal on a portable system with such small speakers.

As we’ve linked to the specific reviews above, we’ll be focusing on Chronicles as a whole, and perhaps the most important element in that is the in-game scoring system. Each sequence is broken up into sections, and each time you finish one you’re assigned a rather nebulous designation: such as Shadow Gold if you weren’t seen and didn’t kill anyone, or Bronze Brawler if you went sword to sword.

At the end of the sequence you’re given points based on how many of each designation you received and given a final score — you can get extra points by completing supplemental goals. The score can then unlock new or improved abilities if you reach certain thresholds. For instance, you may earn the ability to carry more smoke bombs or permanently increase your health.

Conceptually it’s fine to score players based on their performance, but the system here is flawed. On the one hand, Chronicles is offering you multiple ways to go about progressing. On the other hand, it’s punishing you if you don’t favour stealth. So essentially the better you are at the game, the more stuff the game provides to make it easier. Seems counterintuitive, no?

There are new difficulty settings that become available once you beat the games, but odds are if you go through all three of them you’ll probably have had enough of the setup after 15 or so hours. One nice thing is that it’s extremely easy to switch between the three episodes and you don’t need to relaunch the game or anything like that.

At a time when Vita support is depressingly scant, Assassin’s Creed Chronicles packs three adventures into a single release. They’re not perfect, but they’re all eminently playable and are the kind of games that hold up to both short and intermediate session lengths.