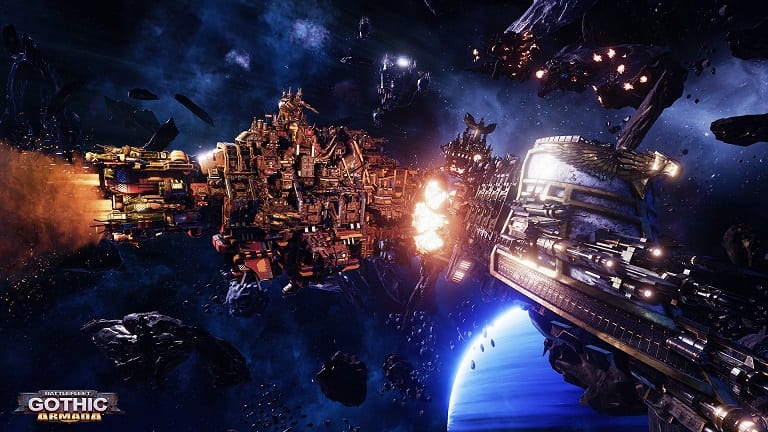 Warhammer games are hit and miss. For every good title like Vermintide, there is a half-dozen mediocre ones seemingly sent out to die. Battlefleet Gothic: Armada is an adaptation of an offshoot of the main Warhammer 40k line, focusing on spaceship battles rather than the troops on the ground like most media in the universe.

The Dawn of War series has already made a mark as Warhammer 40k’s real-time strategy outlet, and this most recent foray manages to hold its own quite well.

Battlefleet Gothic: Armada is a vehicle-focused RTS in which players control relatively small squads of ships. The maps are all actually 2D planes, so they handle more like boats, and this makes controlling them fairly approachable for those that find controlling them in a 3D plane like the Homeworld series daunting.

On most maps players will have small squadrons, so micromanagement isn’t too intimidating, and there’s a slow down time command for when things get dicey. There’s a decent amount of advanced tactics to learn as well, like timing a ship’s high energy turns and bursts to avoid attacks or exploit weapon cooldowns.

Not much stands out visually with Battlefleet Gothic: Armada. Ship models are detailed, but the action takes place on so large a scale they’re hard to appreciate, and many ships look alike. Still, the various races are visually distinct and full of character, though in some firefights Imperial and Chaos can be tough to tell apart.

In the story mode there’s a few well done animatics during story-heavy moments or as lore primers when first encountering a race, and while feeling a bit low budget, they do wonders to flesh out the campaign.

No one may be able to hear you scream in space, but they can sure hear a line ship exploding into dust. Sound design is fairly important to Armada to help keep players into the more critical events that can be easy to overlook during a hectic match. While explosions are obvious cues that something has died, there’s a variety of smaller effects that are very effective as well, like a ship ramping up its warp engines for an escape.

There’s not much music to speak of beyond a typical bombastic main theme, seemingly so it doesn’t get in the way. Voice acting is surprisingly good, and while a bit over the top, fits the universe quite well.

A surprisingly meaty single-player campaign awaits in Battlefleet Gothic: Armada. In addition to story missions, there’s a campaign map to manage as enemies try to take planets for themselves. Each lost planet means a lost resource of some sort, and players will have limited chances to manage their fleets as there’s a limited number of deployments per turn.

One impressive facet of the campaign is that for the most part players can lose a fight and still continue on. There won’t be as many resources gained, and a destroyed ship may have to sit out a few battles, but you’ll be able to scrape on by.

This actually adds a strategic layer to battles in which players need to consider warping a good ship out of a battle or risk not having it around later when it’s really needed. The enemy AI even considers this as well, often fleeing rather than risking death.

In addition to the galactic map, there’s a general player level up system that grants things like access to more advanced classes of ships, as well as an individual ship leveling that allows upgrades and skills to be added to them. This is in the multiplayer as well, which helps with matchmaking so that newer players aren’t matched up against experts.

Each faction has fairly distinct advantages and disadvantages. The Imperials are sorts of jacks of all trades, while the Chaos favour long-range tactics. Orks are great up close but terrible from afar, and the Eldar are fast but lack shields.

In addition, each faction’s ships have their own traits that can be specialized to a degree. For instance, upgrade a ship’s lances to do more damage to shields and equip them with a shield disruption bomb, which makes them great against some factions, but you’ll want to sit that particular ship out against the Eldar.

If there’s one glaring flaw with Battlefleet Gothic: Armada, it’s the rather slow start. In both single and multiplayer, players will only have access to a few ships for a decent chunk of time, and even specializing those ships takes a while.

This can make a few matches feel fairly basic and none of the unique mechanics really shine. And while there is a handful of mission types, a few seem to heavily favour certain races. The basic deathmatch mode often offered up the most satisfying encounters since it allows for far more strategies.

Battlefleet Gothic: Armada is fantastic new foray into the RTS world. It offers those looking for more Warhammer 40k something tasty to devour, and it stands up as entry into an RTS style not often seen much these days. Both the single and multiplayer are worthy of a look and offer a great deal of content.

By Brian Gunn
Tags: Battlefleet Gothic: Armada, Warhammer 40k
This entry was posted on Friday, May 6th, 2016 at 3:33 am and is filed under Brian Gunn, Video Game Reviews. You can follow any responses to this entry through the RSS 2.0 feed. You can skip to the end and leave a response. Pinging is currently not allowed.