The Wire Troll: Steven Wright is No Laughing Matter 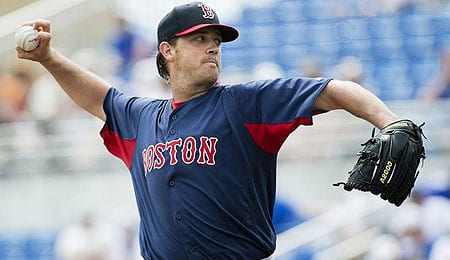 This week, Trevor Story’s legend continues to grow as he tied the record for most April homers by a rookie; Despite a lack of support, Felix Hernandez managed to tie Jamie Moyer’s record for most career wins by a Mariner; and Dee Gordon has been nailed with an 80-game PED suspension, ruining many a Fantasy owners’ chances in the process.

Steven Wright, SP, Boston Red Sox (ESPN: 19.2 per cent; CBS: 44 per cent): Wright has never really gotten any Fantasy love, which isn’t surprising considering knuckleballers don’t tend to be taken too seriously. But this 31-year-old saw more action than ever in the bigs last year, and he’s now entrenched himself in the BoSox rotation with a fast start that includes nearly a K per frame (see the video below for his latest gem). No, Wright doesn’t have the track record you look for in a veteran waiver wire pluck, but you simply can’t argue with these early season results. He may toss a novelty pitch and share the name of a famous comedian, but the fact that he’s been perhaps Boston’s most consistent starting pitcher over the first month is no joke, so go ahead and ride him while he’s rolling.

Matt Szczur, OF, Chicago Cubs (ESPN: 2 per cent; CBS: 3 per cent): Here’s a dude that gets no attention, mostly because he’s buried in a crowded and talented Cubs outfield. But the vowel-deprived Szczur has been amazingly productive in his limited chances, making him an interesting DFS play when you know he’s starting. On Friday, he hit a grand salami in his only at-bat, giving him a whopping 10 RBI — in 27 at-bats. Szczur is getting on base at a great clip and should an injury open the door to more PT, he’d be golden. If nothing else, we’re extremely curious to see what he’d do with more at-bats, not that the Cubs are hurting for offensive help. Trade bait? Set Szczur free! And while you’re at it, buy him another vowel or two.

Michael Saunders, OF, Toronto Blue Jays (ESPN: 16.5 per cent; CBS: 30 per cent): Yes, it was just a week ago that we were touting another Jays’ outfielder because Saunders was hurting again. But Saunders is back now and has hit safely in eight of his last 10 games, going hog wild on Friday with a two-dinger showing. He’s making better contact and has never gotten on base at this clip before. Injuries have made it unlikely that Saunders will ever develop into the consistent 20-20 threat we once thought he’d be, but he can still be very useful with his power, and if he can maintain a sweet BA, it’s gravy.

Tucker Barnhart, C, Cincinnati Reds (ESPN: 0.6 per cent; CBS: 2 per cent): A sluggish start by Devin Mesoraco has opened the door for a bit for more PT for Barnhart, making him an interesting play in deeper NL-only leagues or even as a DFS option. Barnhart is flashing a tad more extra-base pop this year and he’s really improved his contact rate. You may as well try to take advantage of Barnhart as his name gets penciled into more Reds’ lineups until Mesoraco wakes up. After all, what happens if Mesoraco doesn’t get his shit together soon?

Danny Santana, OF, Minnesota Twins (ESPN: 2 per cent; CBS: 7 per cent): Santana came back from a hamstring woe last week and has reached base in all five games he’s played since. It’s early, but he’s hitting much better than last year, although we’re still waiting for his extra-base sock to return to what he did as a rookie. Speed, decent power and a fine BA is the upside here, so we strongly suggest you consider Santana for your AL-only team.

Aaron Blair, SP, Atlanta Braves (ESPN: 6 per cent; CBS: 24 per cent): Among our Top 50 Prospects, Blair has more than held his own since getting promoted for his MLB debut last week. He came within two outs of a quality start in his first outing against the Mets and then limited the powerful Cubs’ offense to two hits and a run over six innings. Unfortunately, Blair’s strong performance was wasted as the Atlanta bullpen imploded, but it’s hard not to be excited by what this kid has shown so far. Get him while you can.

Pedro Strop, RP, Chicago Cubs (ESPN: 5.9 per cent; CBS: 12 per cent): Closer Hector Rondon is looking great, but should he get hurt or blow up, Strop would be the man. Even without the saves, Strop is a sweet option for his holds, Ks, ERA and WHIP.

Brandon Drury, 3B/OF, Arizona Diamondbacks (ESPN: 4.9 per cent; CBS: 20 per cent): Drury is taking at-bats away from Jake Lamb against lefties and has been doing extremely well with three jacks in his last four games. The fact that Drury is also getting action in the outfield should ensure he’ll retain some decent Fantasy value.

Clay Buchholz, SP, Boston Red Sox (ESPN: 15.1 per cent; CBS: 48 per cent): Wait a second. Isn’t Buchholz getting beaten like a red-headed stepchild? Well, yes, but he has a propensity for going on nice rolls (remember, he’s one of just five Red Sox hurlers to begin a season 5-0 since 1975), so if he’s been dropped in your league, perhaps it’s worth stashing him for a couple of weeks to see if he can work his way out of this funk.

Eduardo Escobar, SS, Minnesota Twins (ESPN: 18.6 per cent; CBS: 35 per cent): This Cuban’s extra-base pop is down this season, but he’s beginning to show signs of life with hits in eight of the last 11 games — including his first three-hit effort of the season on Saturday. Escobar proved last season he’s capable of being more productive than what we’ve seen so far this year, so consider him a nice buy-low opportunity.

By RotoRob
Tags: Boston Red Sox, Steven Wright
This entry was posted on Sunday, May 1st, 2016 at 3:00 pm and is filed under BASEBALL, RotoRob, The Wire Troll. You can follow any responses to this entry through the RSS 2.0 feed. Both comments and pings are currently closed.