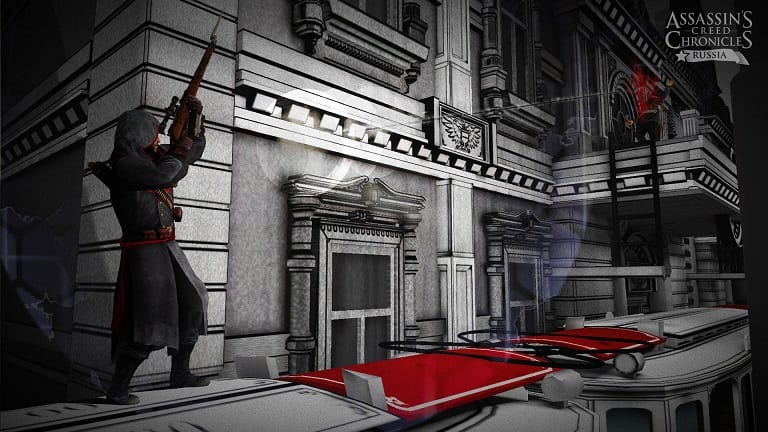 If you’ve played the other Chronicles games, Russia’s controls are nearly identical as it’s built on the same engine. That means for better or worse, the issues that plagued the previous control scheme (floaty timing, particularly on stealth) are still here.

The only difference is that Russia includes some first-person sniping sections, which stand out from the rest of the series as pretty much the only mini-game (more on that below).

While India was the prettiest of the Assassin’s Creed Chronicles, Russia may be the most stylized because of the nature of the time period. Set in 1918, the primary colours are greyscale, but harsh reds are used for accents, creating a unique look that’s almost along the lines of Sin City.

That’s counterbalanced by mediocre voice acting with Russian accents bordering on parody, similar to the weird combination of Chinese/British accents in the first game (India was markedly better). And the less we remember about Ezio Auditore’s cameo, the better.

Outside of the setting, Russia is more of the same of what we’ve seen in China and India. Primary gameplay is set into bite-size sections, and your goal is essentially to get from point A to point B. You’ll be given a score after each section and points earned allow you to purchase minor upgrades.

What hasn’t improved: the AI, the difficulty of some of the level design and the unforgiving enemy detection. However, given that this is the latest chronological entry in the entire series, there are some cool features here that should be integrated into a modern-era Assassin’s Creed game (let’s hope one day we get a Nazi Germany or McCarthy USA entry).

For example, because your main protagonist has a rifle, you have a greater range of attack and the ability to distract with noise. Your phone can be used to create a distraction as well. There are also some first-person sniping sections, which break up the platforming action — more importantly, they actually feel relevant to the historical nature of the game.

Each Chronicles game comes with its pros and cons. China started out strong and finished with terrible level design. India’s trial-and-error gameplay got old quickly, but had the best production values. Russia is a mix of highs and lows. Its attempts to branch out the franchise’s tropes are welcome and sometimes quite innovative, but like the other two games, sometimes it’s just frustrating as hell.

By Mike Chen
Tags: Assassin's Creed, Assassin’s Creed Chronicles: Russia, Chronicles, Russia, Video Game Review
This entry was posted on Thursday, February 18th, 2016 at 9:05 pm and is filed under Mike Chen, Video Game Reviews. You can follow any responses to this entry through the RSS 2.0 feed. Both comments and pings are currently closed.