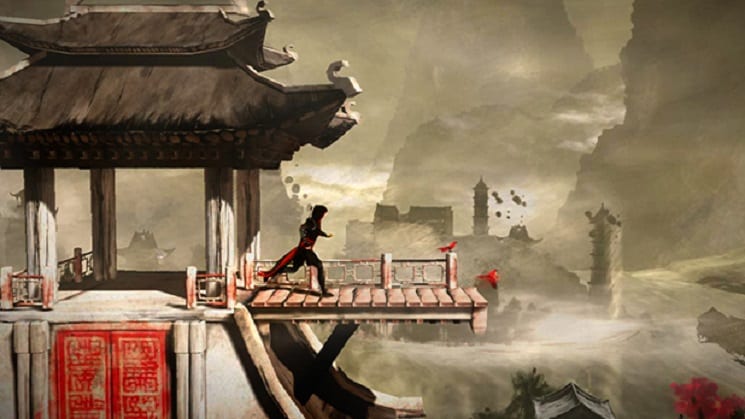 ACC: China offers a more stylized aesthetic to the series.

ACCC offers a variation on the series’ control scheme. The face buttons are somewhat in line with the series’ traditions: quick attack, strong attack, parry and vault are all at your disposal. The trigger buttons activate run, crawl and secondary weapons, while secondary weapon selection is all controlled by the d-pad. Eagle Vision returns by tapping the right analog, though it lacks the usefulness from the main series.

This works fine in theory, and for the most part things are pretty crisp. What gets the game in trouble is implementing the third dimension. Navigating between planes takes place on specialized surfaces (beams that jut outward/inward, netting or planks that can be scaled), and attaching on to these can lead to unnecessary falling or getting stuck.

In a twisted way, this feels appropriate, since a bit of clunky maneuvering is an unfortunate hallmark of Assassin’s Creed.

The Assassin’s Creed series is known for bringing a gritty realism to its semi-fake history. You’re not getting that here. Visuals are slicker and almost feel cel-shaded at times, though you’ll never really get a close-enough view to appreciate any details put into the game’s 3D models. Cut scenes are created in the style of motion comics, and these offer even more style. They’re an effective way to tell the game’s story without requiring the heavy duty processing power or budget of traditional in-engine cut scenes.

For the most part, the voice acting fits. Shao Jun sounds almost British at times through her Chinese accent (maybe she time-traveled from colonized Hong Kong?) while guards tend to speak in effective native Chinese. One of the most baffling choices, though, comes from the return of series stalwart Ezio Auditore de Firenze. Old Ezio, as playable in Assassin’s Creed: Revelations, saw the original voice actor giving a weathered, tired performance. Old Ezio here just sounds like a bad stereotype out of a pizza commercial.

Although the game feels like it belongs in the Assassin’s Creed universe, there are significant elements that hearken back to the original Prince of Persia and Metal Gear Solid on the PSone. ACC:C brings together a mix of platforming, stealth and combat.

While the game is not as parkour-intense as the main series, Shao Jun will still spend most of her time running, vaulting and climbing things. Stealth takes place via the environment — avoiding line of sight and employing hiding places will get you past guard vision cones. Once detected, you can fight your way through or find a hiding spot and wait for the Metal Gear-like alert timer to count down.

Fighting tends to be problematic as it’s just not that smooth. If multiple guards are on you — especially if one has a ranged weapon — then your limited health will quickly take a beating. Your best bet is to make smart use of hiding spots and your noise-making items (fireworks, whistling, etc.) as you try to work around the guards.

Staying stealthy isn’t always easy. Some of this makes sense, with guard vision cones and environmental tip-offs (guard dogs, birds in cages, etc.). Other times, the clunky 2.5D maneuvering will lead you to tipping off a guard without intending to. Similarly, the detection logic with hiding yourself and bodies seems to be inconsistent.

When the game works, it breathes new life into a series that has been around for almost a decade now. However, when it doesn’t work, it can lead to situations that will frustrate even long-time veterans of stealth gameplay. Part of this comes from clunky level design in the middle section of the game. A combination of limited visibility and the aforementioned inconsistency creates tiresome trial and error. While this may be part of the old-school mentality of platforming, there’s a reason why trial-and-error gameplay is largely gone in the modern era of gaming.

By Mike Chen
Tags: Assassin's Creed Chronicles: China
This entry was posted on Monday, June 1st, 2015 at 1:04 am and is filed under Mike Chen, Video Game Reviews. You can follow any responses to this entry through the RSS 2.0 feed. Both comments and pings are currently closed.