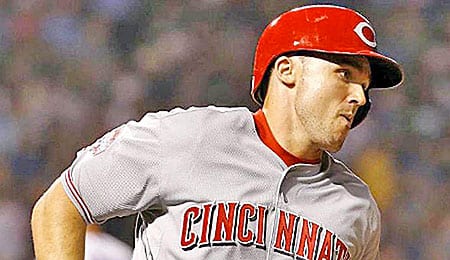 Adam Duvall could be a cheap source of power. (The Cincinnati Reds.com)

This week, the Dodgers’ pitching injury issues continued as reliever Pedro Baez was dinged in the head — while in the bullpen; Aaron Hicks showed off one hell of an arm; and Clayton Kershaw wasn’t as dominant as usual but continued to roll as he stopped the Braves’ winning streak.

Adam Duvall, OF, Cincinnati Reds (ESPN: 1.1 per cent; CBS: 4 per cent): The Reds began the season platooning Duvall and Scott Schebler in left field, but Manager Bryan Price has now declared that Duvall has the job full-time (see Duvall’s reaction to getting the gig in the video below). And why not? Duvall has hit safely in 10 of his last 12 games, capped by a three-run homer Saturday as he starts to accumulate some runs and ribbies. A couple of years ago, we were intrigued by Duvall’s pop, and his .545 slugging percentage so far suggests he’s delivering on that as he heads into his prime power years at age 27.

Tony Cingrani, RP, Cincinnati Reds (ESPN: 3.1 per cent; CBS: 11 per cent): Now that Aroldis Chapman is gone, just who is closing in Cincy? It was J.J. Hoover, but he kind of blew that opportunity, and while he’s still in the mix, his failures have opened the door for other Red relievers. Cingrani may have moved to the top of the candidate list after getting the final five outs against the Cubs Saturday for his fifth hitless outing in the last six appearances. In a blowout win, it was hardly a save situation, but Cingrani — along with Blake Wood, Caleb Cotham and Ross Ohlendorf (our dark horse pick given his wins, holds, Ks and WHIP so far) — needs to be monitored. Last year, Cingrani was converted into a reliever, but he really struggled with his control. It’s been an even bigger issue this year, but the Reds keep running him out there given that he’s been so hard to hit.

Carson Smith, RP, Boston Red Sox (ESPN: 0.3 per cent: CBS: 7 per cent): Smith (forearm) looked good enough pitching in an extended Spring Training game last week that he’s now headed to Triple-A and will make his first appearance there on Tuesday. He should be back with the BoSox in early May, so if you need a reliever capable of accumulating some very sweet numbers, give him a look. Yes, Boston’s bullpen is a busy place, but relievers capable of approaching 100 strikeouts don’t grow on trees.

Javier Baez, 2B/3B/SS, Chicago Cubs (ESPN: 22.3 per cent; CBS: 46 per cent): Baez flashed all his skills on Friday with two hits, a homer and a steal. It’s a reminder of why we were so excited about him as a prospect a couple of years ago. Strikeouts have always been Baez’s bugaboo, and things have not improved in that regard so far this season since he was activated off the DL a week and change ago; in fact, there’s been slight regression. Still, Baez qualifies at three infield positions and has tremendous power potential, making him an automatic Fantasy asset. Now if he’d only learn to draw a frigging walk every now and then.

Aaron Judge, OF, New York Yankees (ESPN: unowned; CBS: 22 per cent): Aaron Hicks is hurting and should he require a DL stint, could it be time for the Yanks to launch the Aaron Judge era? At 6’7″, 275, Judge is an absolute monster, yet it still extremely athletic. His power and arm are his best features, and after struggling to flash pop in his first taste of Triple-A last year, he’s made great strides in that regard early on this season, suggesting he’s just about ready for the bigs — regardless of Hicks’ health.

Chih-Wei Hu, SP, Tampa Bay Rays (ESPN: unowned; CBS: unowned): Miss out on Blake Snell? Not to worry, the seemingly endless parade of Rays’ pitching prospects will soon continue with the likes of Brent Honeywell and Hu, who was just promoted to Triple-A to replace Snell. Okay, so Hu’s Triple-A debut started poorly, but he still showed what he’s capable of by fanning seven in 4 2/3 IP, and the 22-year-old hurler from Taiwan has now struck out an impressive 21 batters in 13 2/3 IP this season. Especially in Dynasty formats, this is a kid to track.

Robbie Ray, SP, Arizona Diamondbacks (ESPN: 17.2 per cent; CBS: 40 per cent): Ray flashed an impressive strikeout rate last year (8.39 K/9) and he’s nearly maintained that this season — with even better bottom line results. The walks worry us, but so far, he’s worked around them.

Coco Crisp, OF, Oakland Athletics (ESPN: 2.3 per cent; CBS: 4 per cent): Crisp mostly plays left field now (although he still sees a fair amount of time in centre) as the A’s try to protect their aging and fragile veteran. He’s shaken off a recent slump with some scorching play over the past few days, and if he can stay healthy, he’s still got enough left in the tank to be useful in AL-only leagues.

Odubel Herrera, OF, Philadelphia Phillies (ESPN: 11 per cent; CBS: 37 per cent): This Venezuelan youngster sure isn’t experiencing a sophomore slump as he piles up the runs for the surprising Phillies. On Saturday, he enjoyed a Fantasy performance for the ages.

Ezequiel Carrera, OF, Toronto Blue Jays (ESPN: 0.2 per cent; CBS: unowned): Michael Saunders is hurting (yes, big shocker there), giving Carrera a chance to bat leadoff for the Jays. Carrera proved he can hit at the Triple-A level a couple of years ago, and now he’s flashing some of that skill in the majors, making for a sneaky DFS play while Saunders is sidelined.

By RotoRob
Tags: Adam Duvall
This entry was posted on Sunday, April 24th, 2016 at 12:05 pm and is filed under BASEBALL, RotoRob, The Wire Troll. You can follow any responses to this entry through the RSS 2.0 feed. Both comments and pings are currently closed.