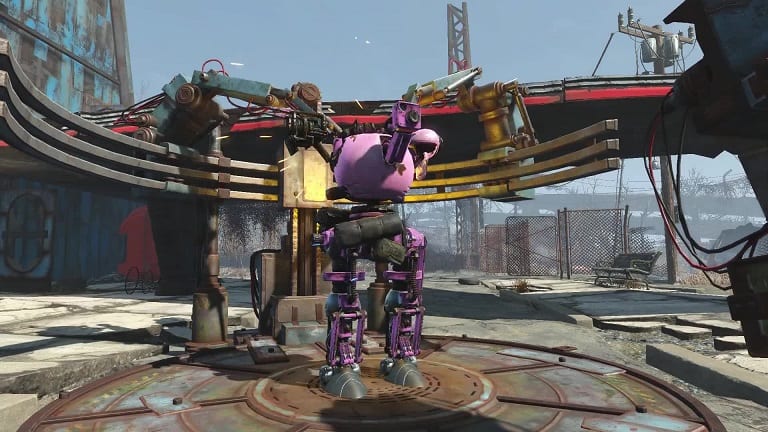 Pink-colored bringer of death? Why not?

The first of many DLC packs for everyone’s favourite recycling simulator, Fallout 4, has recently been released. To kick off its Season Pass content, Bethesda has us building robots and tinkering with their features in Automatron.

Your goal is to stop him, preferably by giving him a dose of his own medicine by assembling your own robots in battles that would make Real Steel get all hot and bothered.

After beginning the initial quest and rescuing a robot named Ada, you’ll need to hunt down tons of resources and scrap parts to make your bots. Want to slap Codsworth’s arms to a treaded chassis? Go right ahead! Want to make an Assaultron that uses flamer throwers instead of knives? Be our toasty guest!

Freedom and the creativity of creating your own bots or modifying found ones is the real meat of this DLC, as the additional campaign content only clocks in at about 5-to-6 hours, depending on how much time you spend at the robot station.

The cool thing about this DLC is that it doesn’t necessarily take place post-campaign, so any bots you come up with can be taken on the entire journey with you provided you’ve reached the minimum level to start on the quest.

It’s a great start for DLC, because Fallout 4 is already host to hundreds of freedoms, and the Automatron DLC certainly adds a lot of time. Granted, much of that time is spent at the workbench, but it’s time nonetheless. And building robotic death machines is just flat out awesome and something fans have wanted since first stepping out of Vault 111.

By Jeff Cater
Tags: Automatron, Bethesda, DLC, Fallout 4, Season Pass, The Mechanist, Video Game Review
This entry was posted on Monday, April 18th, 2016 at 3:07 am and is filed under Jeff Cater, Video Game Reviews. You can follow any responses to this entry through the RSS 2.0 feed. Both comments and pings are currently closed.