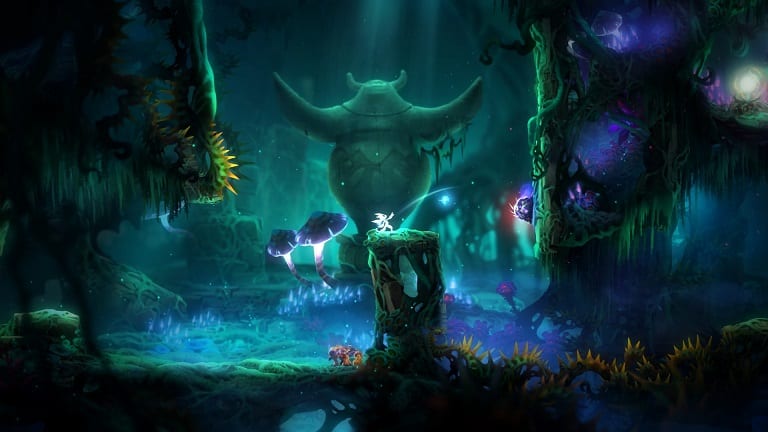 Much of the Definitive Edition is about Naru.

Although priced like an add-on for existing Ori and the Blind Forest owners, the Definitive Edition is in no way compatible with the original (saves don’t carry forward). It’s a standalone download containing the full game with all the new content integrated — so if you were thinking about jumping back in and just tackling the 90 or so extra minutes of location-based content, think again.

Please note that since we already reviewed the initial release we will be focusing on the new content here. If you’d like to refer to our previous coverage, click here.

Large swaths take place in the dark, challenging you by only illuminating the surroundings close to Ori, which allows enemies to get close and jumps to require patience and precision. Black Root Burrows is available very early on, and it fleshes out the story of Naru, Ori’s protector. It’s not vital info, but we always had a soft spot for Naru so it’s nice to see him get a little more screen time.

Perhaps more significant than the expanded world or story are the two new abilities to learn. Dash is clearly the star attraction as it allows Ori to burst in any direction and cover ground quickly. It works both on the ground and in the air, and that added bit of juice makes some of the game’s trickier aerial maneuvers noticeably easier to execute. It’s the one piece of Ori DE that you’d absolutely miss if you went back afterwards and replayed the original.

Ori’s other new trick is Light Burst, which is basically a grenade made of light. You can fling it at enemies, though that didn’t seem as effective as it sounds, or use it to light lanterns. The latter has been added in all different areas of the world, typically to trigger some device that allows access to a secret area, but we didn’t use it much as a weapon.

What might rate as the most welcome addition to returning players, however, is the newfound option to fast travel between previously visited spirit wells. Given the size of the world, and occasional ambiguity of the map when it comes to access, you’ll save a ton of backtracking time by revisiting areas to collect upgrades after nabbing a new ability.

Rounding out the Definitive Edition’s offerings are multiple difficulty settings. Easy has been added to make things more forgiving, though that seems to only pertain to how much damage enemies do, along with a hard mode to up the ante. True sadists can give “One-Life” mode a try, though we can’t imagine pursuing perfection in an eight-plus-hour game teeming with tricky jumps and traps.

Everything that has been added in Ori and the Blind Forest: Definitive Edition makes a great game even better, and for five bucks anyone that already owns the original gets an excuse to play through it all over again. If you’ve never played it, this is the version to buy.

By HC Green
Tags: Definitive Edition, Microsoft, Microsoft Game Studios, Ori and the Blind Forest
This entry was posted on Wednesday, April 20th, 2016 at 11:06 am and is filed under Herija Green, Video Game Reviews. You can follow any responses to this entry through the RSS 2.0 feed. You can leave a response, or trackback from your own site.