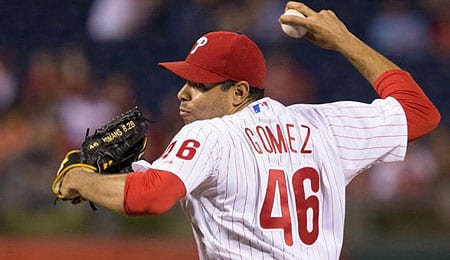 Welcome back to another week of Fantasy baseball and our weekly waiver wire recommendations.

This week, Jacob DeGrom’s worries have shifted from his lat to his newborn; Adrian Beltre has signed a two-year extension with the Rangers; and Pablo Sandoval’s shoulder is apparently bad enough that he’s headed for a second opinion.

Jeanmar Gomez, RP, Philadelphia Phillies (ESPN: 41.5 per cent; CBS: 49 per cent): David Hernandez got his chance and then Dalier Hinojosa took a stab at closing for the Phillies. Now, it’s Gomez who has gotten his shot and so far, he’s run with it, earning saves in each of his last four outings (see video below for a look at him finishing off the Padres on Tuesday) while putting up a tremendous WHIP and ERA. He’s clearly earned the trust of Manager Pete Mackanin, so if you’re trolling for an early-season boost of saves — potentially one that could pay dividends all year — take a long look at Gomez.

Joe Mauer, 1B, Minnesota Twins (ESPN: 42.2 per cent; CBS: 37 per cent): We slotted Mauer 24th in our First Base Rankings heading into last season, but despite experiencing a bit of a bounce back, power-wise, he didn’t quite meet those expectations as his BA sunk to career-worst levels. This year, the veteran is back — in a big way. Mauer’s hit safely in seven straight games, jacking his average up to .359 in the process. He’s drawing walks and scoring runs (and will likely score more when the Twins start hitting as a team like they’re capable of). Mauer’s even playing well defensively at first, so go ahead and consider him if you need a boost in BA.

John Jaso, 1B, Pittsburgh Pirates (ESPN: 18 per cent; CBS: 11 per cent): Jaso was obviously more appealing when he was catcher eligible last year, but he’s been raking so hard, he’ll still be able to help your Fantasy team. It’s unfortunate that concussions forced him out from behind the plate, but it’s his work at the plate that has us intrigued right now. Jaso’s walk rate is down, but so is his strikeout rate as he’s hit safely in 10 of 11 games so far. Don’t expect much power and he’ll offer next to no speed, but this dude is getting on base 40 per cent of the time.

David Freese, 3B, Pittsburgh Pirates (ESPN: 5.6 per cent; CBS: 10 per cent): Over on the other corner of the Bucco infield, Freese looks like a decent short-term pick up while Jung Ho Kang nurses his way back from a knee woe. In the early going, Freese seems to have sacrificed power for average, but as long as he’s playing, there’s a chance for redemption given that PNC Park — while not exactly hitter friendly — is still a better place for batters than Angel Stadium. Oh, and not that you care, but Freese can still pick it at third.

Aledmys Diaz, SS, St. Louis Cardinals (ESPN: 26.2 per cent; CBS: 30 per cent): Diaz seems to have taken control of the three-headed monster that was the Cardinal shortstop rotation while Jhonny Peralta’s hand heals. After lashing two more hits on Saturday, Diaz now has base knocks in all but one of the nine games he’s played. This rookie is scoring tons of runs and is showing surprising power (eight of his 13 hits have gone for extra bases). The only thing Diaz hasn’t done yet is swipe a bag, but he should offer a few of those if his minor league track record means anything.

Chase Anderson, SP, Milwaukee Brewers (ESPN: 6.9 per cent; CBS: 20 per cent): Arizona’s ninth rounder from 2009 caught the attention of Fantasy owners in 2014, but wasn’t as sharp last year. This season, Anderson is now in Milwaukee and he’s making some early noise with back-to-back starts in which he has not yielded an earned run. His command — always a strong point — keeps getting better (nine Ks and two walks in 11 IP), making him a very solid NL-only option at this point.

Homer Bailey, SP, Cincinnati Reds (ESPN: 3.2 per cent; CBS: 16 per cent): Looking for a potential difference-maker hurler to stash? Bailey is nearly done recovering from Tommy John surgery and is expected to begin a rehab assignment this week. This one-time top 10 prospect has never developed into the ace that many forecast, but in 2012 and 2013, he sure looked like a workhorse capable of winning a fair amount of games, racking up some solid strikeout totals and putting up very serviceable ERA and WHIP figures. That kind of pitcher does not grow on trees and is not often available on the wire, so give Bailey — who won’t be 30 until next month — some serious consideration.

Melvin Upton Jr., OF, San Diego Padres (ESPN: 2.8 per cent; CBS: 6 per cent): The man formerly known as B.J. seems to have shaken off a slump and now has an OPS over 800 — something he’s only accomplished once in his career.

Joaquin Benoit, RP, Seattle Mariners (ESPN: 6.9 per cent; CBS: 17 per cent): We slotted Benoit as a top 40 option in our Relief Pitcher Rankings last month because he could get his crack at saves in Em City.

Nick Tropeano, SP, Los Angeles Angels (ESPN: 8.2 per cent; CBS: 14 per cent): Tropeano hurled five shutout innings in his season debut Monday, and could get a long run in the rotation with Andrew Heaney (forearm) hurting.

Yunel Escobar, 3B, Los Angeles Angels (ESPN: 18.2 per cent; CBS: 32 per cent): Escobar is seeing tons of action as the Angels’ new third baseman and leadoff hitter. So far, he’s been very productive.

By RotoRob
Tags: Jeanmar Gomez, Philadelphia Phillies
This entry was posted on Sunday, April 17th, 2016 at 11:05 am and is filed under BASEBALL, RotoRob, The Wire Troll. You can follow any responses to this entry through the RSS 2.0 feed. Both comments and pings are currently closed.