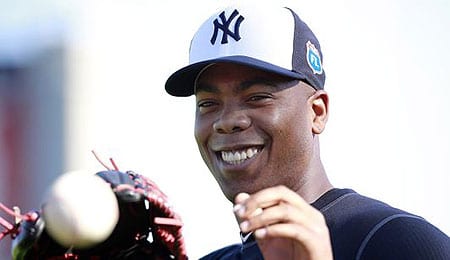 Welcome back to the 2016 RotoRob MLB Draft Kit. Today, we turn our attention to the bullpen. So while you wonder whether Yankee ace Masahiro Tanaka will be okay for Opening Day, let’s preview the top 95 relievers. Special thanks to Jordan (@JBsFantasyHelp) for his excellent work with the rankings.

The key — as always — in selecting your bullpen is to focus on saves, followed by strikeouts and finally ERA/WHIP. The high turnover at the position (made evident by the number of players not ranked last season) backs the saying “don’t pay for saves” because by mid season, there could be at least five new guys closing for teams. Top RPs not closing that need to be drafted are both Dellin Betances and Andrew Miller thanks to their excellent K totals (100+) and low ERAs.

The top eight closers is the tier that you want to make sure you reach for before they are gone. Everyone else can wait until you’re happy with your offense and rotation. Generally, the top and mid-tiers are solid, but there’s a slew of big question marks in around one-third of the teams. And when you get to that bottom tier (Seattle, Philadelphia, Atlanta, San Diego, etc.) things get butt ugly.

Our advice: buy a good closer, add a solid mid-tier one and then start tossing darts. Lots of ’em. With a projected closer turnover rate of around 25 to 30 per cent, you’ll be using the wire quite a bit to round out your pen.

Some questions heading into 2016: Can Jeurys Familia duplicate his phenomenal 2015 season? Will Mark Melancon’s ERA and saves total keep rising? Is Brad Boxberger truly a lights out closer?

1. Aroldis Chapman, New York Yankees (1): Will the addition of Chapman spur the Yankees back to playoff success? They certainly have a bullpen now that rivals the Royals, if that means anything. Chapman stayed healthy last year, and while his WHIP actually looked human, the bottom line numbers were again off the charts. Curious to see him in a Yankee uniform? See the video below and wonder no more, my peeps…

2. Craig Kimbrel, Boston Red Sox (3): The former Brave was on the move again this winter, heading to the Junior Circuit for the first time in his career as Boston also made moves to strengthen its pen. Kimbrel was more hittable than ever last year (if you can call a .185 BAA hittable), but this dude is as good as it gets.

3. Kenley Jansen, Los Angeles Dodgers (19): Jansen has had a stranglehold on the Dodger closing gig for a while now, solidifying it last year but nailing down 36 of 38 save opportunities. His K rate dipped slightly last year, but he remains an overpowering hurler that is right in his prime.

4. Wade Davis, Kansas City Royals (35): No reliever in the AL had a better WHIP (0.79) than Davis last year, a testament to his dominance. His walk rate improved again, and that sharpened control has really been the key to him taking his game to the next level.

5. Jeurys Familia, New York Mets (65): Familia only grabbed the closer job for the Mets because Jenry Mejia kept doping, but Familia never let it go. After blowing five saves in 10 chances in 2014, Familia again blew five last year — only this time in 48 chances. His WHIP and ERA were both off the charts amazing.

6. Ken Giles, Houston Astros (34): After proving he could close for a lousy Phillies team, Giles is in position to really shine in the saves department now that he’s finishing out games for a Houston team that will only get better. He’s capable of logging plenty of innings, and although his control wasn’t as sharp last year, if his command bounces back, the sky’s the limit for this youngster.

7. Trevor Rosenthal, St. Louis Cardinals (4): If Rosenthal’s first season as the full-time closer in 2014 was great, last season was otherworldly — especially given how much his control bounced back. He enjoyed the lowest ERA of his career and — at his age — the best is yet to come.

8. Zack Britton, Baltimore Orioles (12): Britton’s command issues in 2014 signaled that he might have had some trouble holding the job last year. Well, he sure laid those fears to bed. Pitching in fewer innings as the closer from the start of the season, Britton duplicated his 2014 value in establishing himself as one of the better closers in the game.

9. David Robertson Chicago White Sox (5): Robertson last year pitched in his fewest games since 2009, and he again suffered quite a few losses in what was arguably his worst full season ever. Yet, he still had a sub-1.00 WHIP, so how bad was he?

10. Mark Melancon, Pittsburgh Pirates (9): Melancon was worked hard last year, responding with a career high and major league-leading 51 saves. Now that some of the bigger closers have left the NL, he’ll really be a valuable commodity in single-league formats. Melancon was rewarded with a sweet raise through arbitration to $9.65 million, and if he continues his groundball ways, he should be immune to massive fluctuations in performance.

11. Hector Rondon, Chicago Cubs (20): Rondon spent most of the season saving games, reaching 30 for the first time in his career as he set a new career high in innings pitched and proved tougher to hit than ever. His control continues to improve, helping him lower his WHIP each season.

12. Jonathan Papelbon, Washington Nationals (11): When he wasn’t choking the MVP, Papelbon was compiling his worst season since 2010. Things started well, as he upped his K rate for the Phillies, but after a deadline deal to Washington, it went downhill as his WHIP rose. Overall, Papelbon’s ERA rose slightly last year, but the fact he had his lowest save total ever is what really hurt Fantasy owners.

13. Cody Allen, Cleveland Indians (8): The leader of a talented Indian pen, Allen pitched in fewer games last year, which is a good thing considering his workload in recent seasons. He’s improved his control every year and was surprisingly the major league leader in WAR among relievers last season.

14. Francisco Rodriguez, Detroit Tigers (15): Rodriguez didn’t work in as many games last year, but he enjoyed a sparkling ERA as he nears the rarified air of 400 career saves. Now tasked with stabilizing the shit show that has been the back end of the Detroit bullpen in recent years, his re-emergence as a full-time closer the past two seasons has been remarkable after it looked like he was done. Venezuelan born K-Rod may be just what is needed to finally whip compatriot Bruce Rondon into closer material, too. If that happens, the Tiger bullpen may actually become a strength as opposed to a weakness.

15. Brad Boxberger, Tampa Bay Rays (37): After breaking through for 41 saves last season, Boxberger enters the 2016 campaign as the clear closer for the first time in his career. The number of losses he endured last year is a concern, but there likely isn’t a reliever in the game that owns a better changeup. Still, Boxberger will need to improve that ERA (and his xFIP was even higher) to be considered a top-tier option.

16. Dellin Betances, New York Yankees (6): Betances is probably the best setup man in the game, which makes him an integral part of what will clearly be one of the top bullpens in the game. He was actually a bit more hittable last year (yes, his BAA rose from .149 to .157; what a stiff, huh?), but more concerning was the significant hike in his walk rate. Still, how can you argue with a 1.50 ERA, a sweet WHIP, tons of Ks and a boatload of saves and holds? Betances can bring the heat, and really, he should be closing for someone, yet remains a fantastic Fantasy option regardless.

17. Huston Street, Los Angeles Angels (7): Street last year had his worst walk rate since 2008, but it didn’t stop him from posting a second straight 40-save campaign. Unfortunately, he also suffered as many blown saves as he’s endured in the two previous seasons combined. A look at Street’s FIP the last couple of years suggests he’s been pretty lucky, but the good news is the groin woe he dealt with at the end of last season is no longer an issue.

18. Glen Perkins, Minnesota Twins (17): This veteran pitched in his fewest games last year since 2010 and flashed the finest control of his career, but also suffered his most losses as a reliever yet. He wasn’t as valuable as he’d been in recent seasons, but it was really his second half that was ugly. Perkins was cruising along until the All-Star Game with a 1.21 ERA, but afterwards? Ugh. It was 7.32 in the second half. That’s a concern, so don’t overbid on him this season.

19. A.J. Ramos, Miami Marlins (71): Ramos worked a lot of innings in his first stint as a closer, and while he was easier to hit, he was still nasty with a .184 BAA and a solid 2.30 ERA. He’s got one of the better changeups in the game, but that doesn’t guarantee he’ll be earning saves again this year. In fact, the Marlins plan to hold a competition for the job, with Carter Capps being the toughest foe Ramos will deal with if he wants to hold onto the gig. Ramos has the experience; Capps has the stuff. As we alluded to in the intro, this is a fluid situation you need to monitor this spring.

20. Shawn Tolleson, Texas Rangers (98): The Rangers’ bullpen was worked hard last year, led by Tolleson, who surprised many by emerging as the closer in the wake of Neftali Feliz’s implosion. Tolleson’s ERA was up a smidge, but it was more based on legitimate results last year as opposed to the luck he had in 2014. Who saw this dude racking up 35 saves, considering he had exactly zero in 105 career appearances before 2015? We love the fact that Tolleson lowered his WHIP and bet the Dodgers are now kicking themselves for waiving this guy in 2013.

By RotoRob
Tags: Aroldis Chapman, MLB, MLB Draft Kit
This entry was posted on Sunday, March 6th, 2016 at 4:45 pm and is filed under 2016 RotoRob MLB Draft Kit, BASEBALL, Cheat sheets, Jordan Branson, RotoRob. You can follow any responses to this entry through the RSS 2.0 feed. Both comments and pings are currently closed.