By Adrian Wallace and RotoRob

After a delay of a few weeks (argh, stupid “real world” work), we are back with more of the 2015 RotoRob Awards, today turning our attention to the hardwood. Without further ado, we present the 2015 RotoRob Basketball Awards. 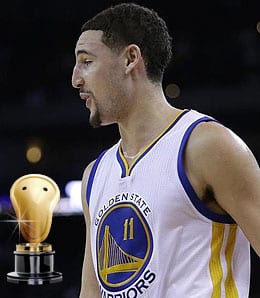 You probably won your Fantasy league if you had Klay Thompson. (AP Photo/Ben Margot)

Everyone knows that Golden State’s Stephen Curry is one of — if not the biggest — stud in Fantasy basketball, but if you wanted him, you had to pay the price. His backcourt mate, however, could be had for far cheaper in last year’s drafts, but despite being a late third round pick, Klay Thompson delivered mid-first round value.

He began the year on fire (January 2015 was his most prolific scoring month, as he averaged 25.9 points while setting an NBA record with 37 points — in one quarter), he played heavier minutes in February, did better work on the glass in March, and then an even better rebounding job in April. This season, Thompson started perfect at the line in October, got more touches in November and then started really shooting the lights out from downtown as 2015 drew to a close. The first half of this season put him on a trajectory to set a new career high in treys. Yup, studly. — RR 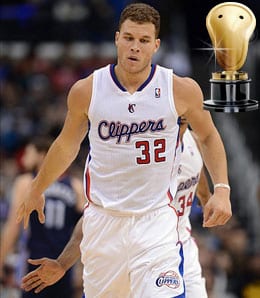 There are a number of candidates that are worthy of obtaining the Fantasy Dud of the Year title for 2015. However there are also a number of factors as to why these candidates are even nominated. Do we blame limited playing time, in which the likes of Danny Green can make a candidate? Perhaps injury; are we expecting too much from the bruised to come back and shine too quickly (Derrick Rose, Wesley Matthews, Chandler Parsons, to name a few)? Or how about just downright irresponsible-off-court-self-inflicted problems like a DUI (Ty Lawson, we’re looking at you)?

Bingo. If you guessed a player that has incorporated all of these factors, pat yourself on the shoulder. That player is none other than Blake Griffin.

Lob City just isn’t the same if both DeAndre Jordan and his dunking sidekick Griffin aren’t making noise together. Fantasy players who invested first round draft picks in Griffin grew frustrated – and it’s all his fault. He’s always been criticized for not being able to contribute more defensively as his season stats to date don’t show increased promise on that side of the fence (which as a Power Forward is kind of required… right?).

However, Griffin’s stats early this season did take a bump in areas like points, rebounds and FG percentage. His playing time is clearly being determined by his own demise — failing to stay healthy (quad) and then continued his issues into 2016 when he injured his fist in a duke out with the team’s assistant equipment manager (extending his court absence).

Griffin has already missed an excessive number of games this season, but when we look at the reasons why, we really need to stop feeling sorry for him. Usually, trouble finds people. But it would appear Griffin has been the one seeking trouble all along. — AW 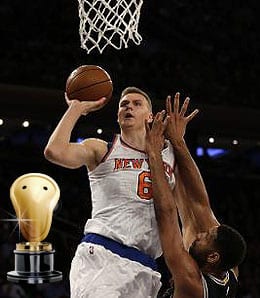 Last year blessed us with a nice batch of hungry and high-potential rookies. Right off the bat, Karl-Anthony Towns should be at the top of this discussion, and rightly so. Towns has shown us early signs of being a double-double machine and a true NBA star in the making.

However there is another freshman cub that has shown a tad bit more grit than the Timberwolf. Kristaps Porzingis, who was severely scrutinized in the 2015 NBA Draft by New Yorkers because the Knicks took him, is now being cheered and feted by hand-held signs of his name at Madison Square Garden.

He has won over the respect of NBA fans all over thanks to his fearless scoring and defensive efforts, not to mention making his own highlight reel of putback dunks. This kid who was once called “soft” now gets called nicknames like the “Porzilla” (he really does resemble Godzilla) and “Worldstar” (for becoming a viral sensation).

Though it could be argued that our runner-up Towns (16.1 PPG, 9.8 RPG, 1.8 BPG, 53 FG percentage) has the better stat-line on paper, Porzingis (14 PPG, 7.4 RPG, 2.0 BPG, 42 FG percentage) has unlocked perks such as star quality and perimeter shooting, giving him the slight advantage in not just Call of Duty, but overall Fantasy stat category contribution. He even helped keep the Knicks in the playoff picture in the first half of the 2015-16 season. — AW 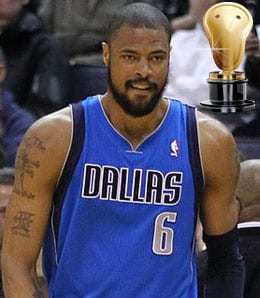 Tyson Chandler has plenty of gas left in the tank. (en.wikipedia.org)

In his final season with the Knicks in 2013-14, veteran Tyson Chandler looked like he was nearing the end of his run as a productive player. Injuries again cost him a good chunk of the season, he sunk fewer buckets and was no longer a near automatic double-double player.

Fast forward to 2014-15 when Chandler headed to Big D to join the Mavericks. Not only did he stay healthy enough to play 75 games for just the fourth time in his career (and first since 2007-08), but he saw more PT, sunk more FTs (while improving his percentage) and enjoyed the third best rebounding season of his lengthy career. True, this season in Phoenix has not been as sweet, but based on his return to glory last season, Chandler takes home our Fantasy Basketball Comeback Player of the Year honours. — RR

All Downhill From Here Award

Not much has gone right for the Lakers since the start of 2015. Last season, they won just 21 times, finishing ahead of only the lowly T-Wolves in the Western Conference. This season, things have gone even worse.

However, on Opening Night in October, Nick Young — Swaggy P himself — nailed a halfcourt shot that whipped the Staples Center into a frenzy. Unfortunately, the Lakers wound losing that game as Minnesota rallied in the second half and it’s been pretty much all downhill for Young and the Lakers since. He’s again struggled with injuries and his overall game has been in freefall since his splendid debut for the Lakers in 2013-14.

There’s not a red-blooded straight man alive that wouldn’t give his left nut to nail an NBA cheerleader. I mean, come on, they are hot.

Well, Will Ferrell took that took concept to a new extreme at a Pelicans’ game last January, when he absolutely nailed a Lakers cheerleader… in the head with a ball. Fans who did not realize the whole thing was a stunt for the movie Daddy’s Home got a shock when she went sprawling to the floor after taking a b-ball right in the face from about six feet away. (See our complete review of the movie here.)

This isn’t how our nailing the cheerleader fantasy typically plays out, Will. But thanks for the laugh. — RR

Is This Mic On?

During the 2015 NCAA Tournament, Wisconsin forward Nigel Hayes ushered in his own form of March Madness. While they were testing the mic sound levels for the press conference stenographer, he was asked a question, and turned to his teammates to say “she’s beautiful,” completely oblivious to the fact that everyone could hear him. Hey, who knows? Maybe it worked and he got lucky!

By the way, Hayes did win up meeting the stenographer.

Now it’s your turn. Let us know in the comments below who you think deserved some basketball hardware last year.

By RotoRob
Tags: BASKETBALL
This entry was posted on Friday, April 1st, 2016 at 11:36 am and is filed under Adrian Wallace, BASKETBALL, RotoRob, RotoRob Awards. You can follow any responses to this entry through the RSS 2.0 feed. Both comments and pings are currently closed.