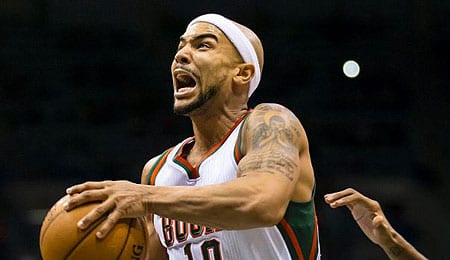 Jerryd Bayliss has become a valuable asset for the Bucks. (Jeff Hanisch/USA Today)

Welcome back to another week of Fantasy basketball. Adrian is afflicted with whatever is going around these days, so the Troll will be penned by your editor this week. We’ll do our best to maintain his standards!

This week, the NBA Hall of Fame finalists were announced, headlined by two of the most colourful players of all time — Shaquille O’Neal and Allen Iverson (you hardly needed any sports betting tips to figure out this pair was HOF-bound); Houston is apparently shopping Dwight Howard; and the league was shocked by the news that New Orleans Pelicans assistant coach Monty Williams’ wife was killed in a car crash.

Jerryd Bayless, PG, Milwaukee Bucks (ESPN: 24.3 per cent; CBS: 32 per cent): Bayless was hurting a couple of months ago, but he returned to action in mid-January and is starting to roll. His touches are up and he’s hoisting — and sinking (55.6 per cent over the last five) — more treys lately. Hell, Bayless even pulled in eight boards on Thursday, but don’t get used to that. Milwaukee’s backcourt situation is kind of up in the air right now, but for the time being, he looks like a solid play (as long as he doesn’t keep making awful fouls like the one in the video below).

E’Twaun Moore, SG, Chicago Bulls (ESPN: 11.3 per cent; CBS: 28 per cent): Jimmy Butler (knee) will miss the next 3-to-4 weeks, opening the door for Moore, who has been off the Fantasy radar for the past few years. Moore has taken advantage so far, shooting extremely well of late, periodically pitching in with some nice offensive games while adding respectable rebound, assist and steal numbers. He’s also been filling it up from downtown, and while he’s been a tad inconsistent, you can’t ignore the overall numbers he’s been averaging while Butler is sidelined.

Jared Dudley, SF, Washington Wizards (ESPN: 26.6 per cent; CBS: 25 per cent): Yup, that’s right, bitches. Just after Christmas, we recommended Dudley, and while his ownership has risen since then, he’s still available in around three quarters of leagues. This dude has been crazy good from downtown (46.6 per cent on the season) and there’s talk a team like Dallas might try to trade for him with Washington slipping out of the playoff race in recent weeks. Dudley has been getting slightly more touches of late, and if that continues, he has the ability to be a real contributor in the second half.

Maurice Harkless, SF, Portland Trail Blazers (ESPN: 2.4 per cent; CBS: 10 per cent): Last season, we projected Harkless as a top 30 option in our Small Forward Rankings, but he failed to come close as injuries limited him to 45 games and even when active, his PT dropped off the table. This season, he’s had a fresh start in Rip City and his three-point shooting has bounced back somewhat, but it’s his recent play that has really caught our eye. Harkless has seen bigger minutes over the last week, contributing 14, 11 and then 19 points (the latter effort of which was paired with 13 boards — both of those numbers representing season highs). Pick him up while he’s balling.

Bobby Portis, C/PF, Chicago Bulls (ESPN: 6.4 per cent; CBS: 36 per cent): Just after Christmas, Portis headlined our recommendations, but his PT really dipped in January. Well, it’s on the rise again now with Joakim Noah (shoulder) out for the remainder of the regular season. Portis recorded a double-double in the last game before the break as he is starting to justify his status as the team’s first round pick last year. There is major upside here, even in a crowded Bulls’ frontcourt.

Steven Adams, Oklahoma City Thunder (ESPN: 18.4 per cent; CBS: 27 per cent): Adams is another player we recommended in December, and his ownership keeps creeping up, but he remains available in the majority of formats. He justified our faith with some nice rebounding numbers in December and then saw even more PT in January. So far this month, Adams’ minutes are up further as he’s become even more entrenched in the Thunder rotation. He’s responded by sinking more buckets (at a sweet 62.5 per cent rate over the last five) while doing a much better job of getting to the line (although his work at the charity stripe leaves something to be desired). We’re expecting Adams to be a regular double-double threat in the second half.

By RotoRob
Tags: Bobby Portis, Jerryd Bayless, Milwaukee Bucks
This entry was posted on Saturday, February 13th, 2016 at 12:05 pm and is filed under BASKETBALL, RotoRob, The Wire Troll. You can follow any responses to this entry through the RSS 2.0 feed. Both comments and pings are currently closed.