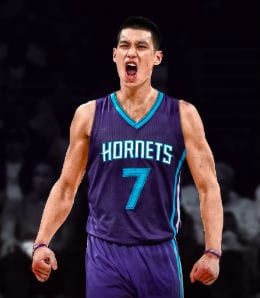 Jeremy Lin has added some sting to the Hornet attack. (Twitter)

This week, Rajon Rondo’s homophobic slurs over two weeks ago against the Celtics created a domino effect –- giving him a week suspension and causing offended veteran NBA referee Bill Kennedy to come out; Jabari Parker befriended an Amazon River turtle named Onassis at the Milwaukee Zoo (you can too on Facebook); and the Warriors finally suffered their first loss, against Milwaukee on Sunday.

All good things must come to an end as did the Warriors’ historic winning streak. But lucky for you we’ll keep the waiver wire recommendations coming until you’ve taken the gold home. Now, shall we?

Jeremy Lin, PG, Charlotte Hornets (ESPN: 35.8 per cent; CBS: 50 per cent): Lin has scored double-digits in three out of his last four games (starting with a big effort against Memphis — see video below), and went Super Saiyan (no joke… check out the hairdo) in a win against the Raptors Thursday, scoring a season high 35 points while adding five rebounds with four assists. Though this did come from a 47-minute game because of OT, Lin is not your typical high scorer so we must not overlook that scoring total. Additionally, he moved into the starting lineup. This may be a sign of more minutes and production to come for Lin if he could resurrect the Linsanity he created in New York back in 2012 — or at least be consistent. The Saiyan will dish you out some assists and should average double-digit scoring.

Jameer Nelson, PG, Denver Nuggets (ESPN: 11.4 per cent; CBS: 32 per cent): Nelson is a stapled-to-the-bench veteran ready and waiting to relive his glory days. He has gotten more chances recently thanks to the absence of Emmanuel Mudiay (ankle) and while Nelson’s PT has fluctuated, he’s averaging 11.2 points, 5.2 assists and 2.4 three pointers over the last five games. Despite Mudiay’s eventual return, Nelson should still serve well as a deep format bench option that will contribute points, assists and three-points for your team.

Gerald Green, SF, Miami Heat (ESPN: 11.2 per cent; CBS: 17 per cent): Green, who had to be hospitalized last month, has come back strong providing some recent “Miami heat” (at least 11 points in six straight games), and working the perimeter, dropping five treys en route to 20 points Friday against the Raptors. Though he’s a streaky shooter, numbers don’t lie. If Green can keep up his hot shooting off the bench, you might want to grab him and make the most of his points and trey ball contribution before he cools off.

Allen Crabbe, SF, Portland Trail Blazers (ESPN: 7.3 per cent; CBS: 22 per cent): Crabbe recently dipped in production (although Friday, he came up big), as previous he was serving as an efficient double-digit scorer off the bench. With teammate Al-Farouq Aminu struggling, Crabbe may be rewarded with extra minutes which will provide your team with some extra bench points and a couple rebounds per game.

John Henson, C/PF, Milwaukee Bucks (ESPN: 6.4 per cent; CBS: 23 per cent): Henson headlined our Wire Troll last month, and he put up some better rebounding numbers. The boards are down lately (well duh… he battles Greg Monroe one half of the Plumlee brothers for rebounds on his own team), he nearly double-doubled (10 points, eight boards, three blocks) in Wednesday’s loss to the Clippers. Despite anything else, Henson is still serving faithfully as a block specialist (seven over his last three games), and at the very least will help you out at the defensive end as a deep format pick up.

Steven Adams, Oklahoma City Thunder (ESPN: 8.8 per cent; CBS: 21 per cent): Adams has been flirting with double-doubles throughout the season and finally notched one Wednesday against Portland with 11 points, 12 boards and a block. He’s been starting every game, but is only slightly in the lead of a time-share with Enes Kanter which is making it difficult for Adams to build on his showing from last season. However, Adams did make the highlight reel when he posterized King James on Thursday. That has to count for something, right? What? Your league don’t have posterizations as a cat? Oh man, get with the times, my peeps!

By Adrian Wallace
Tags: Bill Kennedy, Boston Celtics, Charlotte Hornets, Jabari Parker, Jeremy Lin, Milwaukee Zoo, Onassis, Rajon Rondo, Super Saiyan
This entry was posted on Saturday, December 19th, 2015 at 1:46 pm and is filed under Adrian Wallace, BASKETBALL, The Wire Troll. You can follow any responses to this entry through the RSS 2.0 feed. Both comments and pings are currently closed.