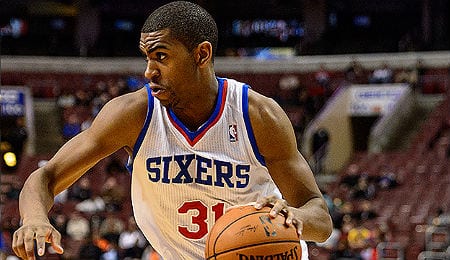 Hollis Thompson has stepped up his play for Philly. (USA Today Images)

Welcome back to another exciting week of Fantasy hoops. Merry Christmas and happy holidays to all our loyal readers. Hell, even to our disloyal readers. Our usual NBA Wire Troll writer, Adrian Wallace, is taking a much-deserved break this weekend, so the duty falls to your trusty (rusty?) editor.

This week, Warriors main man Stephen Curry — who also declared himself as the best player in the world — was dealing with a calf woe that he’s shaken off; Phoenix forward Markieff Morris earned a two-game suspension from the Suns after he literally tried to throw in the towel — at his own coach; and Cleveland and Golden State enjoyed an NBA Finals rematch as the marquee game of the Christmas Day lineup with the Warriors winning by six even as Curry had to leave for the locker room briefly.

Garrett Temple, SG, Washington Wizards (ESPN: 13 per cent; CBS: 19 per cent): It’s been a couple of years since Temple popped up on the Fantasy radar, but he set new career highs in points in a game in back-to-contests (see the video below for the first performance) in the past week and change. All told, he’s now scored at least 20 points in three straight games with some sweet FG percentages and even some decent rebounding. With Bradley Beal (leg) out, Temple has started six of the last seven games at the two for the Wizards and is really taking advantage of his chances, so keep rolling with him while he’s playing big minutes and producing.

Hollis Thompson, SG, Philadelphia 76ers (ESPN: 2.2 per cent; CBS: 11 per cent): Heading into last season, we expected Thompson to emerge as a top 40 small forward, and while the young swingman saw more action, he did not quite live up to our expectations. He’s somewhat picked up his game this season, but is really kicking it into gear lately, hitting double digits in points in three of the last four (including back-to-back 16-point efforts), while canning plenty of treys. The Sixers continue to flounder as one of the worst teams in history, but Thompson’s development is turning into one of their few bright spots.

Bobby Portis, PF, Chicago Bulls (ESPN: 10.1 per cent; CBS: 49 per cent): The former Southeastern Conference Player of the Year, Portis is starting to make noise as a rookie trying to earn PT on a deep Bulls’ squad. His minutes remain inconsistent, so he’s likely just a deep league/dynasty option right now, but we saw his potential last Saturday when he put up 20 points, 11 boards and two steals in just 23 minutes. Now that Joakim Noah (shoulder) is out for a few weeks, Portis has a golden opportunity to earn some bigger minutes in the Chicago frontcourt.

Jared Dudley, SF/SG, Washington Wizards (ESPN: 8.7 per cent; CBS: 16 per cent): In February, we gave Dudley some love, and it was a good call as he saw his most PT of the season that month before petering off down the stretch. Now, he’s really picking things up of late as his PT has soared along with his production. Dudley’s shooting has been off the charts, he’s been doing a better job off the glass, he’s been dropping more dimes, and — over the last three — has four steals with better than 14 points per game. Oh, and he happens to currently be the NBA’s best three-point shooter. Jump on Dudley now.

Taj Gibson, C/PF, Chicago Bulls (ESPN: 23.8 per cent; CBS: 37 per cent): Heading into last season, we slotted Gibson 21st in our Power Forward Rankings, but he missed 20 games and backslid, causing him to fall well short of our projections. Now, with Noah out, pending free agent Gibson is stepping up — and perhaps setting himself up as a good trade chip for the Bulls. With two double-doubles in the last four, Gibson looks like a real nice add if you need a big man.

Jusuf Nurkic, Denver Nuggets (ESPN: 17.5 per cent; CBS: 41 per cent): Just under a year ago, we recommended Nurkic and — even though his shooting took a bath in January — it worked out well as he got on a nice roll for several weeks. He’s been sidelined this season because of his knee, but was able to go through shootaround last week, so is perhaps just a week or two away from making his season debut. Nurkic is expected to take over as the starter when he’s back, so if you have room to stash him, it could pay dividends down the road.

By RotoRob
Tags: Bobby Portis, Chicago Bulls, fantasy basketball, Hollis Thompson, Philadelphia 76ers, Stephen Curry
This entry was posted on Saturday, December 26th, 2015 at 7:33 pm and is filed under BASKETBALL, RotoRob, The Wire Troll. You can follow any responses to this entry through the RSS 2.0 feed. Both comments and pings are currently closed.