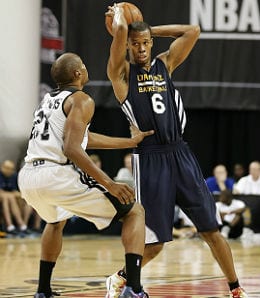 Rodney Hood (right) will likely be the starter once he returns. (acc.blogs.starnewsonline.com)

Welcome back to another week of Fantasy basketball. Andrew Wiggins is playing well, but is not yet a star like some expected. Jabari Parker, Joel Embiid and Julius Randle are all out for the season. Aaron Gordon and Marcus Smart have already battled injuries this season. It’s been a rough start to the “top three draft class of all time.” However, things are looking up as you will read in this week’s edition of The Wire Troll — featuring four rookies.

Now, on to this week’s Fantasy basketball waiver wire recommendations.

Dante Exum, PG/SG, Utah Jazz (ESPN: 2.3 per cent; CBS: 26 per cent): With Alec Burks done for the season, Rodney Hood out for the week and Patrick Christopher dislocating his kneecap Friday, there are now a lot of minutes to go around in Utah. This means that Exum, the fifth overall pick last year, will start getting big minutes. In 22 minutes on Friday he had 13 points on 5-for-9 shooting to along with three steals. A big surprise from Exum this season has been his ability to shoot the three. His outside shooting was a major concern coming into the league, but he’s been able to shoot 35 per cent from deep — upping that to 39 per cent since the beginning of December.

Rodney Hood, SG, Utah Jazz (ESPN: 1.3 per cent; CBS: 13 per cent): If you’re feeling confident about your team but need a good shooter, this is the guy you’re looking for. Out for the rest of the week with inflammation in his heel, Hood will likely return as the full time starter the rest of the season. An under the radar pickup, he shot 42 per cent from downtown last season at Duke, making him someone that, heading into the season, we expected to able to contribute to the Jazz as a rookie. Injuries have slowed Hood’s progress, but less than a month ago, he hinted at what he’s capable of (see video below). We’re expecting to see more of that soon.

Nikola Mirotic, PF, Chicago Bulls, (ESPN: 10.1 per cent; CBS: 47 per cent): After a 27-point breakout game three weeks and change ago, Mirotic has kept it up, despite sporadic playing time. He’s a great shooter that would have a lot of upside if Pau Gasol or Joakim Noah got hurt. Mirotic should be owned in deeper leagues, and if he keeps getting PT like he did Saturday (38 minutes, albeit in an OT game), keep an eye on him in standard formats as he’s a big double-double threat when he gets minutes (he’s done it three times already this season). Consider him a really solid pick up moving forward.

Patrick Patterson, PF, Toronto Raptors (ESPN: 11.1 per cent; CBS: 40 per cent): Patterson is not the flashiest pick up, but a very solid one nonetheless. He is getting consistent minutes and is being productive with them. The reason you should pick Patterson up is that he’s a very under the radar one steal, one block and one three-pointer per game dude. If you need help in any of these cats (and who doesn’t?), pick him up. Patterson won’t hurt you, but could very well help you.

Jusuf Nurkic, Denver Nuggets (ESPN: 1.7 per cent; CBS: 15 per cent): Finally starting to get some minutes, Nurkic has used them nicely. In 21 minutes Thursday, he was able to pick up his first career double-double with 10 points, 10 rebounds (four offensive) and three blocks. If the minutes continue, Nurkic is a great plug and play. If injuries break him into the starting lineup, he could be a must own. Even if you don’t pick Nurkic up, he is worth keeping an eye on.

Cody Zeller, PF/C, Charlotte Hornets (ESPN: 4.4 per cent; CBS: 24 per cent): Zeller, who we slotted 25th in our Power Forward Rankings, has barely played at a top 55 level at the position so far, but the tides seem to be turning for 2013’s fourth overall pick. With Al Jefferson (groin) out for the next four weeks, Zeller will be asked to help pick up the pace, and the fact that he’s played at least 20 minutes in four straight (including 32 minutes on Monday) bodes well for his opportunity to produce. Zeller managed a dozen points Saturday, but really hasn’t been contributing much offense. However, need some rebounding? He’s put together three straight seven-board efforts and is also pitching in with blocks (six in three games before Saturday). If Zeller keeps flirting with double-doubles, the PT will rise, so give him a look in deeper formats.

By McCade Pearson
Tags: Andrew Wiggins, Jabari Parker
This entry was posted on Sunday, January 4th, 2015 at 4:54 pm and is filed under BASKETBALL, McCade Pearson, The Wire Troll. You can follow any responses to this entry through the RSS 2.0 feed. Both comments and pings are currently closed.