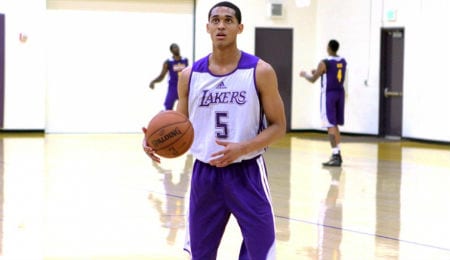 Jordan Clarkson has taken over as the starting PG for the Lake Show. (NBA.com)

The NBA is starting to get heated. The Suns, Pelicans and Thunder are all only separated by two games. It would be only one but Anthony Davis was able to knock down a game winning three in Oklahoma City on Friday. Meanwhile, Atlanta defeated the Warriors in what could be a finals preview. Stephen Curry went off for 51 points while hitting 10 shots from downtown, yet Golden State still lost.

Jordan Clarkson, PG, Los Angeles Lakers (ESPN: 10.0 per cent; CBS: 46 per cent): The rookie from Missouri is now getting his chance as starting point guard of the Lakers. He went from a DNP-CD on January 21 to being their starter overnight. Since the promotion, Clarkson has averaged 13-3-3. He’s not a flashy pick up, but is worth looking at, especially considering the power he’s shown going to the hoop (see video below).

Jared Dudley, SG/SF, Milwaukee Bucks (ESPN: 5.0 per cent; CBS: 23 per cent): Dudley has been playing well lately in large part to his minutes going up. He has cracked the 30-minute mark in three of his last four games, which has helped his scoring. You would like to see a little more, but if things keep trending this direction Dudley might be worth a pickup.

Tony Allen, SF/SG, Memphis Grizzlies (ESPN: 3.4 per cent; CBS: 17 per cent): Allen is one of only five players currently averaging over two steals per game, so if you need help in that area, he’s a great choice. He is also leading the league in steal percentage.

Patrick Patterson, PF, Toronto Raptors (ESPN: 11.3 per cent; CBS: 44 per cent): The Raptors’ sixth man has been on a roll lately, averaging 10 points and eight rebounds over his last 10 games. He is starting to light it ip from downtown, having hit 16 three-pointers over this stretch. Patterson has had success all season, but has now become almost a must own.

Kevin Garnett, C/PF, Brooklyn Nets (ESPN: 4.6 per cent; CBS: 21 per cent): There is a sense around the league that this could be The Big Ticket’s final run. If that is the case the soon to be 39-year-old will be giving it all he’s got down the stretch as the Nets are in a dog fight (half a game up on Heat for the eighth seed) for a playoff spot. Currently, Garnett is only playing 20 MPG, however he is averaging 12 points and 12 rebounds per 36 minutes. If his role grows he might not win another NBA title, but he could be the X-Factor on your way to winning a title.

Kosta Koufos, Memphis Grizzlies (ESPN: 0.4 per cent; CBS: 2 per cent): Koufos is a quiet player that is averaging five and five, and doesn’t have a lot of value now, but is a real double-double threat if he becomes a starter. With Marc Gasol playing at an MVP level, Koufos becomes a player that should be owned by all Gasol owners down the stretch.

By McCade Pearson
Tags: Anthony Davis, NBA, New Orleans Pelicans, Oklahoma City Thunder, Phoenix Suns
This entry was posted on Saturday, February 7th, 2015 at 4:43 pm and is filed under BASKETBALL, McCade Pearson, The Wire Troll. You can follow any responses to this entry through the RSS 2.0 feed. Both comments and pings are currently closed.