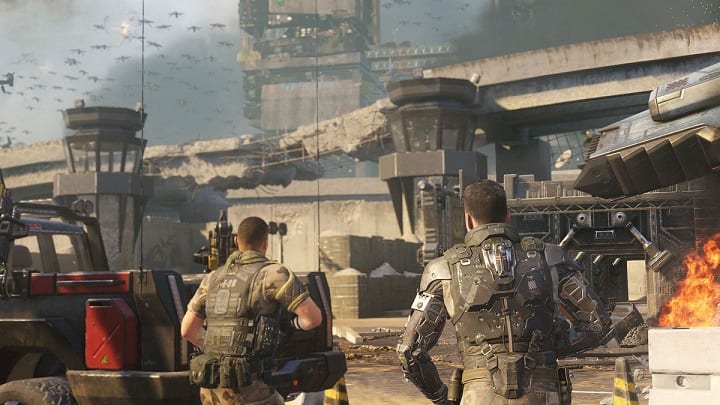 Odds are they’re yelling at each other right here.

Our introduction to the Call of Duty franchise came back in 2006 with Treyarch’s Call of Duty 3. One of our earliest reviews was its follow up, World at War. That makes Call of Duty: Black Ops III the fifth game we’ve played from the developer and first since the move to the three-year cycle. Let’s see how it stacks up to its previous efforts.

Gone is the exoskeleton that stood as Advanced Warfare’s signature addition, and in its place are the new “Cyber Cores,” which grant you unique powers. There are three branches to choose from, and you’re free to switch between them whenever you change your loadout (at Level 20 you unlock the ability to do it at anytime).

Holding down on the d-pad brings up your selectable options, which you choose with the right stick. Your chosen ability is then used by hitting both bumpers simultaneously. After a brief cooldown you’re able to use it again. It works fine, though switching between abilities isn’t that smooth and leaves you vulnerable to attack.

A new HUD overlay has also been added, identifying targets and relaying information such as range and unit type. It can be toggled on/off by pushing right on the d-pad. The problem is that it’s not clear whether you’ve just turned it on or off unless there are enemies nearby to scan. This can be frustrating as using the HUD to spot enemies before they’re on top of you is vital on higher difficulties.

One of the more significant changes in Black Ops III is a shift away from funneled corridors and toward more open spaces with multiple pathways. Visually, the results are mixed, as with more area to show there’s less detail and fewer set pieces, which is something the series is known for. There’s decent variety in the locations and, as usual, plenty of cool futuristic guns, but we certainly weren’t wowed by this relative to a number of other next-gen games we’ve seen recently.

Activision has done an underrated job in recent years of bringing in quality talent to handle some of the more pivotal roles. Outside of Christopher Meloni (Taylor) and Katee Sackhoff (Hall), however, the voice work is a disappointment. There’s so much manufactured drama and ineffectual yelling that it reminded us of Brick Tamland screaming, “LOUD NOISES!” in Anchorman. The music and sound effects are solid.

While we may be in the minority on this, we’ve always enjoyed the Call of Duty campaigns dating back to the original Modern Warfare; in fact, we have played through all of them twice (including once on the highest difficulty) since World at War. So when we say without equivocation that we will not be taking a second trip through Black Ops III’s muddled mess of a story you know there are issues.

You’re a nameless soldier (male or female this time) that’s mortally wounded by a combat robot, and the only way to survive is to get cybernetic limbs and implants. There are unforeseen complications from the procedure, however, and as you progress your character’s grip on what’s real and what’s a delusion becomes all the more tenuous.

If handled differently maybe it could’ve offered something compelling. Instead, it’s just confusing, and even worse than that you’ll be hard pressed to find anyone to like: your handler, your partner, your squadmates, yourself. Everyone is abrasive. The final act stretches on far too long as well, and features an all-time cheap trick of having enemies literally materialize out of the ground to shoot you. By the time the game tried to toss a curveball we’d already checked out.

That isn’t to say that the campaign is devoid of enjoyable shooting. It’s not. You’ve got a cool assortment of customizable guns, the Cyber Cores and their unique abilities, and more. The action isn’t special, though, and the story’s absurdity drags down the fun factor.

It’s fun to unleash the Reaper’s Scythe, which is a four-barreled mini-gun, or Specter’s active camo to become invisible, and when used properly they can help turn the tide of a matchup. Conversely, it’s extra gratifying to take down a powered up foe and rob them of the use of their ability.

Movement and map design also feel more in tune than in previous installments. While Advanced Warfare worked in some verticality to give the exos purpose, Black Ops III seems designed around wall running, swimming and other non-traditional ways of getting around. The result is a more free flowing style of combat that emphasizes motion.

That being said, the wheel isn’t being reinvented, either. You can still expect the usual accruements (kill streaks, weapon customization, perks) all coming available via the traditional slow-drip unlock as you level up.

It wouldn’t be a Treyarch game without Zombies, and Shadows of Evil is the latest installment. It has a 1940s vibe and, as usual, features known Hollywood actors to do the voices (Jeff Goldblum, Ron Perlman, etc.). It’s a massive area with loads to do, but any true progress will require assembling a legit team (no randoms) and lots of trial and error (or watching YouTube videos).

Despite a lackluster campaign, Call of Duty: Black Ops III once again packs a ton of content and gets good mileage out of the new specialist system and strong map design in multiplayer. Even in a very competitive time for shooters this one should find a spot in the rotation.

By HC Green
Tags: Activision, Black Ops III, Call of Duty, Treyarch, Video Game Review
This entry was posted on Friday, November 13th, 2015 at 2:15 am and is filed under Herija Green, Video Game Reviews. You can follow any responses to this entry through the RSS 2.0 feed. Both comments and pings are currently closed.