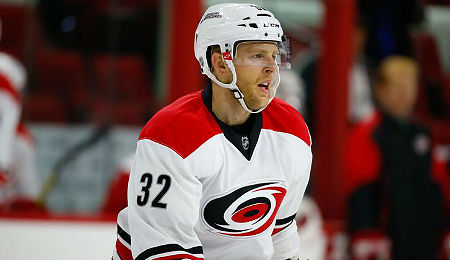 It’s been yet another exciting week of NHL and Fantasy hockey, and we’re really just getting started. Looking for a steal on your league’s waiver wire? Well, as usual, we’ve got you covered.

Kris Versteeg, RW, Carolina Hurricanes (ESPN: 35.4 per cent; CBS: 19 per cent): After a poor 1-3 start to the season, the ‘Canes have managed to put together a much more respectable 5-5 record over their past 10 games. Versteeg has played a big role in the team’s mini turnaround with two goals (see one from last week in the video below), 10 points, a plus-2 rating, six penalty minutes, 30 shots on goal, three hits and five blocked shots. Don’t expect him to lead your Fantasy team in points, but take advantage of the speedster now while he’s hot and playing on the team’s top line.

Michael Frolik, RW, Calgary Flames (ESPN: 3.6 per cent; CBS: 23 per cent): The Flames are one of a few teams previously expected to contend that are now reeling near the bottom of the standings. Still, there have been some pleasant surprises, including the production of Frolik, who has three goals, 11 points, a minus-1 rating, two penalty minutes, 43 shots on goal, 13 hits and 16 blocked shots through 15 games. He should be a little more productive and consistent than Versteeg, so he’s worth giving a PTO on your team, so to speak.

Tomas Fleischmann, LW, Montreal Canadiens (ESPN: 15.5 per cent; CBS: 31 per cent): The Habs are still as good as ever, leading the league with 27 points and a 13-2-1 record. Goaltender Carey Price has been a massive part of their success, but even as he’s seen time on the shelf recently, the Canadiens have kept on ticking without him. Fleischmann is part of the reason why with four goals, 11 points, a plus-7 rating, 12 penalty minutes, 26 shots on goal, eight hits and four blocked shots. For now, just about any player in the Red, White and Blue is worth adding to your Fantasy team. We suggest this guy.

Kevin Klein, D, New York Rangers (ESPN: 29.3 per cent; CBS: 39 per cent): The Rangers currently occupy the top of the Metropolitan Division with a 10-2-2 record, 22 points and a league-best 1.71 goals against per game average. Klein has played a key role in that success with three goals, four points, a plus-11 rating (second in the NHL), nine penalty minutes, 17 shots on goal, 24 hits and 28 blocked shots. There are probably higher scoring rearguards on your waiver wire, but he’ll help your team’s overall plus-minus rating and will also chip in hits and blocks on a regular basis.

Michal Neuvirth, G, Philadelphia Flyers (ESPN: 18.4 per cent; CBS: 31 per cent): Neuvirth is getting yet another fresh start, and he seems to be thoroughly enjoying it. In eight appearances, the former Cap has three wins, a 1.81 goals against average, a .945 save percentage and a league-leading three shutouts. You’ll have to excuse us while we go add him to our team…

Fantasy Tip of the Week: With 18-year-old generational phenom Connor McDavid out for “months” with a broken clavicle, it might be worth your while to check out fellow Oiler youngster Leon Draisaitl. In four games this season since being recalled, the 2014 third overall pick has an impressive three goals, seven points, a plus-4 rating, two penalty minutes, a power play goal, 12 shots on goal, three hits and one blocked shot. Draisaitl has spent most of his time to the right of top line centre Ryan Nugent-Hopkins and left winger Taylor Hall, but will most likely drop down to centre Benoit Pouliot and Nail Yakupov with McDavid out long term and Jordan Eberle returning to the lineup.

Fantasy GMs worldwide are snatching Draisaitl up faster than Wonka bars, so pick him up now. On a related note, if you currently have Yakupov on your roster, it might be worth cutting bait for a better winger in your league’s free agent pool. However, keep a close eye on him to see how he adjusts to playing with Draisaitl. If you don’t have Yakupov, but he’s available, buy low — real low — because he could be worth your while, particularly in leagues with a very shallow FA pool. If nothing else, remember that McDavid will eventually return and, when he does, Coach Todd McLellan will likely see if the No. 1 overall pick can rediscover that magic between Yak and Pouliot.

By Dakota Case
Tags: Carolina Hurricanes, Kris Versteeg
This entry was posted on Sunday, November 8th, 2015 at 3:57 pm and is filed under Dakota Case, HOCKEY, The Wire Troll. You can follow any responses to this entry through the RSS 2.0 feed. Both comments and pings are currently closed.