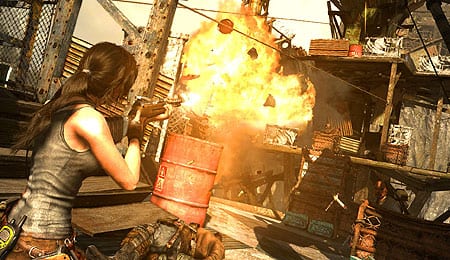 Things look better than ever in the new Definitive Edition.

If you checked out our Year in Review, you saw Square-Enix’s Tomb Raider reboot firmly nestled among our top five titles for 2013. The mixture of combat and exploration was excellent, and the more three-dimensional tone they set with Lara Croft, who was no longer just a series of one-liners and short shorts, did a great job of creating a new baseline for the series.

Now, a little less than a year later, the game is being re-released for the PlayStation 4 and Xbox One as Tomb Raider: Definitive Edition. Although it does come with all the original’s downloadable content, there wasn’t that much of it to begin with. Outside of an additional tomb and some new outfits for Lara, most of it pertains to the multiplayer, which remains the game’s weakest aspect. Instead, the main draw is that the visual bar was raised considerably as an already great looking game has been rebuilt into something even more impressive.

While much of the focus will be on Lara, she’s not the only beneficiary of this overhaul. The lush island of Yamatai looks tremendous as you progress, and the next-gen lighting really shines when reflecting the flickering of flames or flash of lightning. Between that, the weather effects and diversity of the locations, the island itself becomes a place you can’t help but want to explore thoroughly. And, oh yeah, Lara looks better than she ever has with more realistic looking features.

Beyond the extra content and beefed up graphics, Tomb Raider: Definitive Edition does have a couple of new tricks up its sleeve. Both the Xbox One and PlayStation 4 versions support voice commands (you’ll need to have your Kinect or Eye hooked up to take advantage), and the PS4 controller also gets in on the act. Collectibles, such as audio logs, and other sounds can now be heard through the Dual Shock 4’s speaker — oddly, though, they still play through the speakers as well, which creates an echo effect. The controller will even flicker red and orange when holding a torch.

For everything this game is, however, it’s not your typical “Game of the Year” re-release in which the full version is accompanied by hours of added content. Nor is it an older game getting a much needed high-definition makeover as the original Tomb Raider rates among the best looking titles on the Xbox 360 or PlayStation 3. And that leads to the question: is it worth buying?

If you didn’t play it when it launched last year then the answer is an enthusiastic yes. In fact, viewed purely on its own merits you can make a strong case that this is the best game available on either of the next-gen systems. If you shelled out US$60 a year ago, however, it’s tough to say a few bits of extra content and some improved graphics are worth doubling your investment in the series.

We thoroughly enjoyed playing Tomb Raider: Definitive Edition. It sucked us back in almost immediately and reaffirmed our decision to label it among the best games of 2013. If you own one of the next-gen systems and haven’t played this game, you should pick up a copy immediately. If you already played through it, there’s far less urgency.

By Herija Green
Tags: Square Enix
This entry was posted on Wednesday, February 12th, 2014 at 3:10 pm and is filed under Herija Green, Video Game Reviews. You can follow any responses to this entry through the RSS 2.0 feed. Both comments and pings are currently closed.