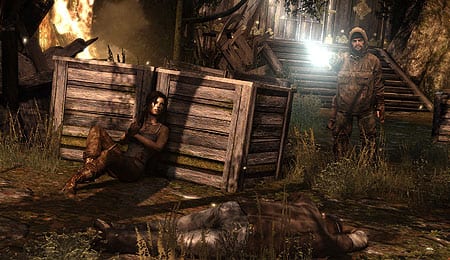 Whether in film or games, reboots are tricky business. The best ones manage to retain what made the original special while innovating enough that it doesn’t feel overly derivative. That already Herculean chore gets even tougher when you’ve got an icon like Lara Croft, whose twin handguns and short shorts are the stuff of cosplay legend. Impressively, developer Crystal Dynamics is more than equal to the task in crafting an origins story that leaves all previous Tomb Raider titles in the dust.

Exploration and combat are the featured attractions in Tomb Raider, and both of them are handled skillfully here. Lara moves through the environment and clambers up walls with tremendous fluidity, putting the platforming sections on par with industry standard bearers like Assassin’s Creed and Uncharted. Combat isn’t quite as silky smooth, but odds are you won’t notice until you transition from the campaign to the multiplayer.

Where the game excels is in consistently adding new abilities or features to your repertoire and yet still keeping everything simple to execute. For instance, your arsenal consists of four weapons, each of which is assigned to a direction on the d-pad. As you upgrade weapons you’ll have attachments and/or different ammo types and these are smartly cycled through by just pushing the d-pad in the direction of the gun multiple times. Everything feels well planned.

That being said, there are a couple items of note. One, you enter cover automatically, and there are times when Lara doesn’t get fully concealed — something you don’t realize until you’re being shot. I also felt the Quick Time Events (QTEs) were a little less forgiving than usual. Along those same lines, I died on a few occasions because I was planning one or two moves ahead and didn’t notice the game prompt me to hit a button to tighten my grip.

Detailed environments and lifelike character movement highlight a strong visual showing as the island of Yamatai is a joy to explore. The mix of nature and dilapidated structures, which range from ancient to semi-modern in accordance with the island’s lore, is very well done, and it never feels like the locations are being recycled as you progress. There are a number of exhilarating set pieces as well, all of which are slickly produced with lots of dynamic camera angles for white-knuckle action.

As good as the single-player looks, the multiplayer is decidedly plain. It still feels like an extension of the campaign to some extent, but when you compare the drop in graphical quality to a multiplayer-centric title like Halo 4 or Black Ops 2 it’s quite noticeable. The decision to have water bead up on the “camera” during cut scenes was a misstep as well. I mean, in a torrential downpour why are like three drops of rain rolling across the lens at any one time?

On the audio side, Camilla Luddington delivers as a young Lara. Given that this was a re-imagining of a fairly two-dimensional character, Luddington’s performance gives depth to Croft and lends weight to what she’s going through. The secondary characters aren’t as well developed — this is Lara’s story through and through — but they all do a fine job. Musically, Tomb Raider offers up a steady soundtrack with a handful of standout moments.

Go ahead and throw out any preconceived notions you have about Lara Croft based on previous games as this time around Crystal Dynamics is showing you a young version that’s long on instinct and training but short on experience and self confidence. Tomb Raider opens with the shipwreck seen in trailers as the Endurance is ripped apart by a massive storm near the Dragon’s Triangle. Croft and several of her shipmates wash up on the shores of Yamatai, the rumoured resting place of the mysterious Sun Queen and home to a group of violent island dwellers.

It takes some time — much of the first hour or so is spent acclimating to the island in the form of QTEs and introductory sections that show Lara finding basic necessities and attempting to regroup with the crew — but once the game opens up it gathers some serious steam. The story does a nice job of painting Lara as an unwilling heroine, who gradually accepts the burden not because it’s something she wants, but because she’s the only one capable of doing it. There are some interesting twists and plenty of Lost-esque supernatural elements at work as well, making the plot one of the game’s many triumphs.

Another high point is the blending of Tomb Raider’s two gameplay styles: platforming and combat. While the series has always been solid with the former, the advances in combat represent the series’ biggest step forward. Squaring off against the island’s inhabitants is a blast as you cycle through your available weaponry for the cover-based, ranged firefights and also go toe-to-toe thanks to some cool counterattacks during melee combat.

There are a few moments when it threatens to get a little over the top with the battles, but the game always seems to know when to pull back and give you time to digest what’s just happened. By keeping the story pushing forward and mixing platform and combat sections, Tomb Raider turns out to be among the better paced games I’ve played in recent memory. Plus, if you ever feel things are moving along too quickly you can always fast travel back to a previous location to search of artifacts or tackle one of the game’s optional tombs, which focus on problem solving and reflexes.

Each found item, defeated foe or completed segment earns you experience points, which you can use to purchase new skills. Some are passive, allowing you to nab additional loot from enemies or spot items more easily, while others unlock new combat abilities. There’s also generous amounts of the generically named “salvage” to be found. This operates as an in-game currency and allows you to upgrade your weapons by purchasing new add-ons. It’s an enjoyable system that encourages exploration so Lara can grow into a bad ass as you progress.

It took in the neighborhood of 15 hours to complete the story mode, though that was with all collectibles found and tombs raided so you can certainly finish in less time if you forego those elements. Given how enjoyable they are, though, I’m not sure why anyone would.

Unfortunately, Tomb Raider’s multiplayer comes up short. That mix of combat and platforming that serves the campaign so well just doesn’t translate online. The gunplay is a particularly sore spot as shooting feels highly imprecise from long range, which turns most matches into close quarters battles regardless of what you’re packing. There are only four modes available as well, and the two moderately original offerings — Cry for Help and Rescue — seem skewed toward one side.

It’s not a terrible showing. It’s just not built for the long haul. I could see gamers investing a handful of hours into online play, but it’s hard to envision much beyond that.

Forget about the lackluster multiplayer. Tomb Raider offers an excellent single-player experience that blends exploration and combat as well as any game I’ve played in years — and yes, that includes Uncharted. Other studios should take note — this is how a reboot should be handled. It’s better than the games that preceded it, and it makes you eagerly anticipate the next offering.

By Herija Green
Tags: Lara Croft
This entry was posted on Tuesday, March 5th, 2013 at 10:10 am and is filed under Herija Green, Video Game Reviews. You can follow any responses to this entry through the RSS 2.0 feed. Both comments and pings are currently closed.