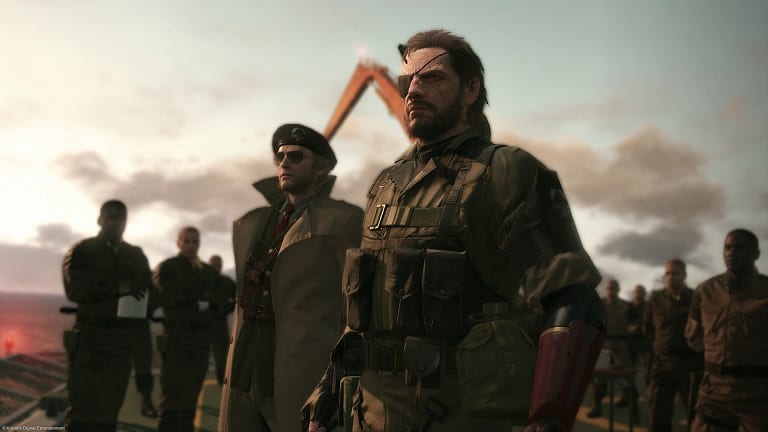 The Phantom Pain is a true Game of the Year candidate.

Although it took years to make and included Konami releasing an in-between prologue with Ground Zeroes, Hideo Kojima’s Metal Gear Solid V: The Phantom Pain is finally here, and it’s well worth the wait. This is the story of Big Boss/Snake’s descent into hell, and it’s a fascinating journey — along with being ridiculously fun to play.

The control scheme for The Phantom Pain is exactly the same as Ground Zeroes. However, because Ground Zeroes was basically a one-hour prologue with some bonus content, you were just thrust into the action there. The Phantom Pain introduces the controls over several hours with a tutorial section and basic areas of increasing difficulty. At the end of this, you’ll be moving, sneaking and shooting smoothly.

Two big changes from previous Metal Gear Solid games are the binocular and radio systems. Binoculars (R1) mark and track targets, meaning there’s no overhead radar anymore. Instead, you’ll want to survey an area before going in, though your buddies (DD the dog and Quiet the sniper) can scout ahead for you. The radio (L1), rather than being an endless supply of codec conversations, is now used to command your allies.

Kojima Productions has managed to top other open-world games in terms of controls. Movement is much smoother than Assassin’s Creed and combat is much more fluid than Grand Theft Auto. This may be partially due to the areas’ sparse population (it’s really just guards, vehicles and wildlife), but regardless, the controls are among the smoothest of this generation and allow you to easily adapt Snake’s infiltration style to whatever you prefer.

Like Metal Gear Solid: Peace Walker, a good portion of The Phantom Pain is spent around recruitment, outside ops and Mother Base/equipment development. All of this is handled through a fairly dense menu system, though fortunately it’s not too complicated, and the tables are sortable so you can set up your preferred methods quickly.

We’ll see how things compare when Halo 5 and Uncharted 4 launch, but The Phantom Pain has to be the best looking game to hit this generation so far — particularly impressive when you consider the scale and scope of missions. Character models are all impressively detailed and the lighting is fantastic. Metal Gear Solid games are known for pushing the envelope in terms of visuals, and this is no exception.

Longtime fans will have to get used to Kiefer Sutherland taking over as Snake. He does a suitable job, though it does take time to get accustomed to it. Some familiar faces turn up, some with their old voice actors and some with new ones, but everyone lives up to the high standards set by previous entries in the series.

Music has always been a big part of the Metal Gear Solid series, and the score here switches between melancholy and tense, which is appropriate given the dark themes of The Phantom Pain. The in-field soundtrack isn’t anything particularly memorable, though tracks found during missions can always be played to lighten the mood with some ’80s new wave.

The Phantom Pain opens with Snake waking up from a coma following the events of Ground Zeroes. The next hour is one of the most engaging tutorial sections in recent years. It’s as fun and intriguing as Fallout 3’s childhood segment but with a far different tone.

It also includes many nods to previous Metal Gear Solid games, and the pace/tension of it, along with the spooky hospital environment, provides an idea of what might’ve been had Konami not cancelled the Kojima/Guillermo Del Toro Silent Hills project.

Following the hospital segment, you take Snake into the field. This plays exactly like Ground Zeroes, except on a much larger scale. The huge open-world maps break down into specific missions that focus on a location(s), though you’re allowed to free roam if you want.

Some are quick and easy — smart players can accomplish the main goals in 5-to-10 minutes. Others — the important story ones in particular — are large infiltrations that feel like pure Metal Gear Solid. These can take a good 30-to-45 minutes and often include cut scenes and critical character/plot pieces.

How you go about completing them is almost entirely up to you. With a range of weapons, equipment and support team available, you could go in guns blazing, stealthily avoid all guards, tranq/capture all guards, or a little bit of everything. The only time this really gets frustrating is if a certain target is at a location at a certain time. If you miss that window, the target goes mobile and it becomes an exercise in frustration and better to simply restart.

However, Kojima has some safety nets to avoid rage quitting. After failing a few times, you’ll get the option to use a chicken hat (literally a hat that looks like a chicken). This eliminates guard detection up to three times, and if you’re still having problems, it can be upgraded to eliminating all visual detection.

A big part of how you infiltrate depends on how you like to use your support buddies. Each offers their own pros and cons, and their abilities grow the more you use them. This allows for a completely custom experience, as we used Quiet or DD most of the time (you can swap them out mid-mission), and hardly ever touched the mechanical Walker Gear. Different players will use buddies as an extension for their preferred method of play, and that’s part of what makes The Phantom Pain’s gameplay so deep.

Meanwhile, much of the story is told through tapes that can be played in the background via a Walkman rather than the series’ traditional codec system. You’ll also find a collection of ’80s music in the field, which means you can literally be gunning down the enemy while Kajagoogoo plays in the background. The radio is used strictly for in-field advice and to communicate with your buddies.

Like Peace Walker, all non-mission activities take place through the Mother Base screen. Weapon/equipment development, staff (recruited from the field) assignments and operations, and base development are all menu driven. Through these options, your equipment list will grow and your base will expand, which means you’ll drive more income (GMP) to fuel more expensive research. It’s not entirely optional since you’ll want certain weapons to get through specific missions, though the amount of time you invest in it is purely up to you.

Finally, it’s important to note how massive The Phantom Pain is. As we surpassed the 30-hour mark, we noticed that our completion score was only 25 per cent despite being about 75 per cent through the main story (Chapter 1).

Bigger, better and bolder, Metal Gear Solid V: The Phantom Pain is the best game in the lauded series. It’s a stunning achievement for Hideo Kojima and the clear frontrunner for 2015’s Game of the Year. Even if you’re not a fan of the series’ dense fiction, the extremely deep gameplay is worth checking out.

By Mike Chen
Tags: Kojima, Konami, Metal Gear, Metal Gear Solid V: The Phantom Pain, The Phantom Pain, Video Game Review
This entry was posted on Wednesday, September 9th, 2015 at 10:39 pm and is filed under Mike Chen, Video Game Reviews. You can follow any responses to this entry through the RSS 2.0 feed. Both comments and pings are currently closed.