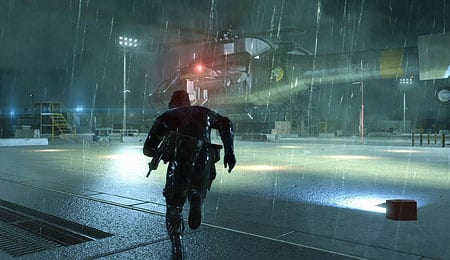 Ground Zeroes has among the most impressive lighting we’ve ever seen.

Thirty dollars (US$) is a lot to ask for a game that’s more demo than full campaign. That being said, Metal Gear Solid V: Ground Zeroes (AKA, the intro to the true next chapter of the series, The Phantom Pain) falls into a weird middle ground. On one hand, it’s clearly designed to get gamers used to a new model for the series’ gameplay. On the other hand, there’s only one real story-driven campaign, with some cursory filler side missions that are fun but not vital. So, given the price point and content value, is this worth diving in? The answer is yes, but with the caveat that you’ll probably want to evaluate how much you pay for it depending on how much of a series fan you are.

Ground Zeroes will feel instantly familiar and distant to series veterans. Many controls carry over from Guns Of The Patriots and the console port of Peace Walker, such as a button for contextual interaction (climbing, picking up bodies) and a button for movement stance (walk/crouch/crawl). Like Peace Walker, weapons and items are navigated through the directional pad rather than the traditional Metal Gear trigger buttons. Icons guide you through the contextual items, so as you discover new types of interaction for the franchise — like stealing a truck — the game holds your hand along the way.

As with previous entries, the game provides numerous options for dealing with enemies. General third-person shooting provides a Grand Theft Auto-like stickiness to the retical for aiming assistance. Clicking in the right stick switches to a first person view. There’s also the franchise’s trademark CQC, and from there, enemies can be interrogated, knocked out, or executed.

The new options screen provides interaction with the in-game smartphone (dubbed the iDroid, in a bit of double trademark infringement). From here, you can access the map, notes, and any in-game audiologs you’ve collected along the way.

New to Metal Gear is a single button for instant codec support (L1), which can be used contextually. Similarly, while binoculars (R1) have always been part of the game, it’s now a vital part of your scouting and essentially replaces the map. By focusing the binoculars on an enemy for a few seconds, they will become tagged and highlighted. This is especially key since there’s no more map (sonar or otherwise) available during real-time movements, only for reference.

If you’re a longtime series player, some of this will work against your instincts. And while Ground Zeroes is essentially the tutorial section of the main entry, enemy tactics can be pretty unforgiving. So while there aren’t any technical problems with the game’s control scheme, its evolution may prove to be a stumbling block. Don’t worry, you’ll hit a point when everything clicks.

Ground Zeroes may be the best-looking game released to date. Character models are more detailed, draw distances are better, and things don’t pixelate up close (though the game does blur focus depending on distance, and we have no idea if that’s a trick to aid technical limitations or not). The game’s lighting is incredible, particularly during daytime ops (side missions) or when you see how dynamic the environment is (i.e., shooting out lights during a rain storm). It’s one of the most impressive displays of graphical power we’ve seen, especially considering the fact that it’s a military base with military personnel in it — not exactly the most spectacular of locations.

As for sound, the much ballyhooed debut of Kiefer Sutherland as Snake is a bit underwhelming. We’ll admit that we were among the many enraged fans that signed petitions and posted snarky comments when it was announced that David Hayter was ousted from the lead role. Given time, we’ve calmed down to a wait-and-see approach. However, Ground Zeroes doesn’t give Snake much to say except for the opening cut scene. So the jury remains out on his performance.

Outside of that, this is standard Metal Gear audio, from the score to the background chatter and sound effects. Perhaps the biggest difference from a sound design perspective is the forced use of the directional microphone, which means that many background noises that may have previously been ignored are now brought to the forefront.

Initial buzz about Ground Zeroes was that it clocked in at only two hours of gameplay. This is both true and false. The primary mission will take 1-to-3 hours to get through depending on how you play. Being an MGS diehard, we actually got caught/killed more times in our first hour than any previous game. Part of this was coming to grips with the slightly modified control scheme, along with the new way the game handles getting caught.

Previously, when a guard spotted you, you had to find a place to hide and wait out various countdown timers. However, with no map options available, this makes remaining stealthy a little bit more of a challenge. Ground Zeroes provides a new Reflex mode, in which Snake experiences a few seconds of Bullet Time to take out a guard before things get more dire. This winds up changing the Metal Gear experience, and you can argue whether this is an evolutionary step in modernizing the franchise or if it dumbs it down. It totally caught us off guard (no pun intended) the first few times it happened, but after about an hour, it became more second nature.

Series director Hideo Kojima talked about how the next iteration would bring Metal Gear into an open world. That’s true of Ground Zeroes, though there are some limitations. In many ways, this feels like the Groznyj Grad section of Snake Eater, where you were faced with an immense base and a goal while left to your own devices. Snake can enter into the compound through a few different ways, and once he’s in there, exploration and progress really depends on the direction the player wishes to try. Ground Zeroes can easily be played as a traditional Metal Gear hide-n-seek or a third-person shooter or a combination of both. We started off doing our traditional method of tranq-darting guards and sneaking around, but two things told us to restart and think outside of our usual (cardboard) box.

First, enemy vision seems to be sharper in this game — when they see you, a meter shows up on screen, giving you potential time to go back in the shadows. This isn’t always very forgiving, and the tactics used to find you can be pretty efficient, which was our first prompt to try something different. Second, the moment we realized that we could hop into a truck that was just sitting there and drive around the base reasonably incognito, both possibilities and expectations changed.

Granted, there are not too many options there. We imagine in the full game there will be plenty of other ways to manipulate objects, vehicles, and the environment. For now, though, this exemplifies the Ground Zeroes experience — it’s exciting, in many ways innovative, but also tentative and a bit empty.

Once you finish the main campaign, four bonus missions are available (all within the same environment, though different day/night cycles) and plenty of collectibles are hidden through the base. These missions feel very similar to the side ops in Peace Walker except that they clock in around 20-to-30 minutes each. Each focuses on a different element, such as identification and assassination or full-on combat. Unlocked difficulty levels and a huge number of collectibles tie into the completion of each mission. Estimates of up to 10 hours of gameplay are accurate if you’re interested in all of these different options. For those that are going to run through each of these once or twice, about five-to-seven hours is a reasonable projection. However, if your only goal is to get through and find out what happens to Snake, US$30 is a steep price, despite the upcoming connectivity with the proper game.

Ground Zeroes is clearly an appetizer for the full Phantom Pain game, and we’re guessing the decision for the separate release came from the accountants at Konami rather than Kojima. It serves its purpose well as an introduction and tutorial, and the side missions are fun. The price still feels a bit steep (US$20 for last gen consoles) but there is value in this teaser. It’s worth picking up, but your jumping in price is going to dictate whether that’s now or later when used copies and digital discounts are available.

By Mike Chen
Tags: Video Game Review
This entry was posted on Wednesday, March 26th, 2014 at 5:24 pm and is filed under Mike Chen, Video Game Reviews. You can follow any responses to this entry through the RSS 2.0 feed. Both comments and pings are currently closed.