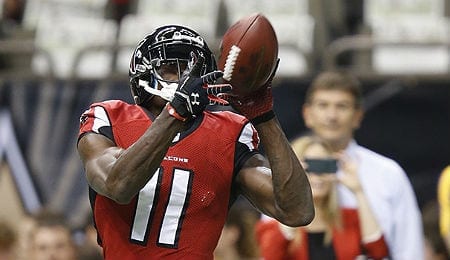 Welcome back to the 2015 RotoRob NFL Draft Kit. So while you wonder how rusty Jason Pierre-Paul will be, let’s review the top 65 wide receivers in Fantasy football.

We seem to be in the golden age of wide receivers. Want one of the very top two or three? You will likely need to use your first round pick to land him. Just look at last year’s historic and record breaking performance by the 2014 rookie WR class to get an indication of how bright the future is at this position. The key here, with the position being so deep, is that you can easily land a top WR and then wait before grabbing another.

As for the 2015 rookie class, while it’s also deep, beware not to fall in love with anyone just yet. Even Amari Cooper will take hisr lumps and the rest of the class will struggle for reps this year.

Some questions heading into 2015: Is Demaryius Thomas on the block in Denver? How will Alshon Jeffery handle the expected increase in double teams he’ll face?

1. Antonio Brown, Pittsburgh Steelers (7): A member of the 2014 RotoRob All Pro Team, Brown proved he’s now a major big-play threat. He set career highs almost across the board, and with 85 first down catches, he really helped the high-powered Steeler offense maintain drives. Brown is currently under contract, but with WRs beginning to demand bigger deals, Pittsburgh will soon have to show him the money. After all, he’s getting national attention as part of the new opening for Sunday Night Football (and he’s pretty stoked about it as you can see in the video below). — RR

2. Dez Bryant, Dallas Cowboys (4): It looked like a holdout was in the cards, but Bryant parlayed a career year in 2014 into a massive new contract this offseason, raising the bar on what a top receiver is worth. He hasn’t missed a game since 2011 and last year upped his yardage, and while his first downs dropped, he did set a career high in TDs. Now let’s see Bryant live up to his five-year, $70-million deal. — RR

3. Demaryius Thomas, Denver Broncos (3): Last year, we speculated that Thomas could wind up as the top producing WR, and if Antonio Brown hadn’t exploded, that’s exactly what would have happened. Thomas began last season slowly, then went ballistic for 226 yards in Week Five to begin a streak of seven straight games with over 100 yards receiving. It took forever, but the Broncos finally showed him the money this offseason — a five-year deal he deserved after setting career bests in catches and yards. — RR

4. Calvin Johnson, Detroit Lions (1): Johnson gives the Lions a consistent No. 1 target, even if they lack overall depth at the position. He’s been in decline since his massive 2012 campaign, but he’s so athletic that as long as he’s fully healthy, he’s capable of anything. — RR

6. Odell Beckham Jr., New York Giants (51): Former LSU star Beckham ran away with the 2014 NFL Rookie of the Year trophy — despite playing hurt for most if not all of the season. He’s dealing with a hammy woe this summer, but nothing that should stop him from being on the field in Week One. In a year filled with phenomenal rookie receivers, Beckham rolled up 1,305 yards receiving — despite missing a quarter of the season. For a rookie to miss all of the preseason, yet still make the Pro Bowl… um, wow. — RR

7. A.J. Green, Cincinnati Bengals (2): Green’s health woes last year gave an opportunity to Mohamed Sanu, but Green has been healthy this summer, so we’re hoping for a major bounceback. It’s the first time Green really ever dealt with injuries, so we’re not concerned. His health is a big key to QB Andy Dalton also bouncing back. — RR

8. Randall Cobb, Green Bay Packers (12): Cobb may be small in stature, but he provides big help to his Fantasy owners. He stayed healthy last year, enjoying a major breakthrough as he finished fourth in TDs and ninth in receptions. The former Kentucky star was healthy again this summer (until a shoulder woe that should not be a factor), so expect more of the same. — RR

9. Alshon Jeffery, Chicago Bears (8): Jeffery is dealing with a calf injury this summer, and at the very least it would be nice to know he’s healthy before you draft. His second half of 2014 was tremendous, but not quite enough for him to match his 2013 reception total. Still, Jeffery reached double digit TDs for the first time and cured his fumble-itis from the previous season. — RR

10. DeAndre Hopkins, Houston Texans (56): We know the Texans’ QB situation is rather murky, but initially Hopkins will have Brian Hoyer throwing to him. Touchdowns may be hard to come by, but yardage is another story, as Hopkins averaged nearly 16 yards per catch in 2014. — MS

11. T.Y. Hilton, Indianapolis Colts (19): Even as Indy’s receiving corps expands, don’t expect Hilton’s production to diminish. Year four for Andrew Luck should be even better than the first three, and Hilton could also improve even after a major bust-out 2014 season in which he racked up 1,345 yards receiving. Hilton may lose a touchdown or two, but he is still Luck’s go-to guy. — MS

12. Emmanuel Sanders, Denver Broncos (23): If nothing else, Sanders should thrive early in the season in warmer weather as he did last year. In 2014, he tallied seven 100-yard games, but none after Week 12. A healthy Peyton Manning and quick understanding of Gary Kubiak’s offense will determine Sanders’ Fantasy value this season. — MS

13. Mike Evans, Tampa Bay Buccaneers (42): We were hoping Tampa Bay would land Marcus Mariota to feed Evans the ball, but instead, he’s got Jameis Winston. Of course, no one is feeding Evans anything right now as he deals him a hamstring injury, so our first concern is making sure that the top offensive weapon for the Bucs is ready to go in Week One. He’s coming off a fantastic rookie season that somewhat got lost in a sea of great rookie WR performances. But Evans, who missed one game last season, averaged a robust 15.5 yards per reception in his first taste of the NFL. Now let’s see what he and several other talented Bucs can do about getting this team back to respectability. — RR

14. Sammy Watkins, Buffalo Bills (31): If only Watkins had a top-flight quarterback throwing to him. The potentially-dreadful combo of Matt Cassel, E.J. Manuel and Tyrod Taylor doesn’t do him any favours, but then again, Watkins nearly hit the century mark in receptions during his rookie campaign last year with Kyle Orton as his QB for the majority of the season. — MS

15. Julian Edelman, New England Patriots (21): Even Tom Brady’s suspension won’t be enough to hinder Edelman, who will make an impact not only as a receiver but as a punt returner (he’s returned four to the house in his career). Edelman should continue to carve up defensive backs from the slot receiver position. — MS

16. Jordan Matthews, Philadelphia Eagles (54): Matthews’ Fantasy potential very well hinges on just how fast Sam Bradford gets healthy and back to expected form. You never know in Chip Kelly’s offense, but Matthews has a good shot to top his eight-touchdown rookie campaign from last year. — MS

17. Brandin Cooks, New Orleans Saints (37): Drew Brees isn’t getting any younger, and the Saints will look drastically different than they did a year ago. On the plus side, Cooks appears healthy and ready to make up for lost time after a thumb injury short-circuited a promising first season. — MS

18. Amari Cooper, Oakland Raiders (NR): Granted, the Raiders have whiffed going high in the draft on receivers in the past, but Cooper should be different. He is a very polished route runner and, fortunately, is breaking onto the scene in Derek Carr’s sophomore season rather than his rookie one. It may take a few weeks, but Cooper should make a solid Fantasy impact. — MS

19. Andre Johnson, Indianapolis Colts (15): Johnson dealt with some health issues last year, and now he suddenly finds himself as a No. 2 receiver for the first time ever. Still, now he’s going to be receiving passes from Andrew Luck, and that has to get Fantasy owners excited. In Houston, Johnson’s TD numbered really dropped in recent years thanks to lacklustre QB play, so we’re expecting a big turnaround after he managed just 85 receptions and had the second lowest YPR average of his career last season. His Hall of Fame potential should get a big boost with the move to the Colts. — RR

20. Davante Adams, Green Bay Packers (NR): Just one of a host of amazing rookie receivers in 2014, Adams got a huge boost with news that Jordy Nelson is done for the season. Then when Randall Cobb hurt his shoulder in preseason action, the Packers pretty much enclosed Adams in bubble wrap. Adams is now a starter for the high-powered Packer offense after an impressive rookie season as the No. 3 man. Let’s see if he can become an even bigger deep threat and put up the kind of huge numbers that most think he’s capable of. — RR

By RotoRob
Tags: NFL
This entry was posted on Tuesday, September 8th, 2015 at 8:07 pm and is filed under 2015 RotoRob NFL Draft Kit, Cheat sheets, FOOTBALL, McCade Pearson, Michael Seff, RotoRob. You can follow any responses to this entry through the RSS 2.0 feed. Both comments and pings are currently closed.