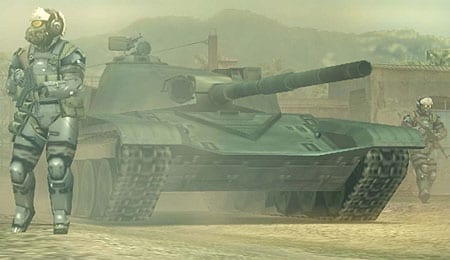 Multi-player co-op makes boss battles against tanks and vehicles much easier than before.

It’s hard for me to be completely objective about a Metal Gear game. From the eight-bit incarnation as a kid to the mind-blowing PSone Metal Gear Solid in college to a midnight campout on launch day for Metal Gear Solid 4: Guns of the Patriots, this series has been in my life for a long, long time. I’m one of those obsessive fanboys that can actually decrypt the dense mythology of the series, and while I’ve always enjoyed the gameplay aspect, MGS has always been about characters for me. However, I’m going to try my absolute best to be unbiased regarding Metal Gear Solid: Peace Walker for the PSP.

Peace Walker opens up about 10 years past the events of Metal Gear Solid 3: Snake Eater. Big Boss (who still prefers to be called Snake) is amassing a mercenary company, and one prospective client wants him to help his army-less country. There’s deception and intrigue, along with the MacGuffin that’s equally tantalizing for Big Boss as well as long-time series fans: an audio recording of his mentor, The Boss — the woman players executed at the end of Snake Eater. This drives a story that’s a little more intimate than other Metal Gear games. If you’re a Metal Gear fanboy, it’ll help fill in all sorts of timeline and event gaps. If you’re not a fan of the series, you’re still in luck because Metal Gear Solid: Peace Walker is a really well-constructed game despite the hardware limitations of the PSP. Hideo Kojima and company have taken what worked best from Metal Gear Solid: Portable Ops, stripped out the bad parts, and re-built it from the ground up into an authentic MGS experience that’s fun and unique.

One of the absolute worst things about MGS: Portable Ops was the controls. With all of the required contextual maneuvers and inventory management taking up buttons, precise aiming and camera control became nearly impossible. Peace Walker fixes that to the best of its ability given the PSP’s lack of a second analog nub. In its default control scheme (which can be customized), the analog nub is used for movement, the directional pad is used for inventory control and secondary actions, and the four buttons are used for camera movement. While that scheme lacks the precision of a second analog input, it is a heck of a lot easier than working with Portable Ops’ controls. The trigger buttons are successfully used for aiming and attack/firing.

Because of the PSP’s small screen size and the non-analog camera controls, aiming on the move can be difficult. Peace Walker offers an optional auto-aim system (toggled by the Select button) which is hit and miss. If you’ve got an automatic weapon and are within a certain proximity, it can be effective, though you can’t go for a head shot. If you’re in a tight situation and want to fend off attackers while running, auto aim isn’t the most accurate. For example, there are several boss fights involving a vehicle and waves of soldiers. With auto aim on, Peace Walker doesn’t always snap its target to the most appropriate foe, so when you’re trying to kill enemy soldiers while avoiding the vehicle, you might find yourself just firing in a random direction. This isn’t always the case, but it is a detriment to the experience.

However, one of Peace Walker’s more innovative features is contextual close-quarters combat (CQC). Stand pat while unarmed or with a CQC-friendly weapon and Big Boss will unleash a melee attack. When you’re within range, an icon will pop up letting you know that hitting “R” will prompt Big Boss to grab his opponent, and from there, the enemy can be thrown or interrogated. If there is a group of enemies close by, the “R” prompt reappears after disposing of the first enemy to unleash a time-sensitive attack that dispatches of further enemies one by one.

This makes CQC in a group infinitely easier than before. You still maintain control over it, but it doesn’t require precise movement to execute, thus removing many of the CQC frustrations from Portable Ops.

Peace Walker also streamlines some Metal Gear staples. Bodies disappear after a short time, so the need and ability to drag them around is gone. Item looting is done by hitting one of the directional pad buttons rather than picking a body up and shaking it. Inventory management is simplified by instant on/off switching and the limited amount of slots Big Boss can hold. While all of these previous features worked fine with a PS2/PS3 controller, they’re not missed here; it’s a less-is-more scheme that proves to be effective.

Because of the PSP’s small screen size, it’s unfair to compare Peace Walker’s graphics to the powerhouse Guns of the Patriots. However, when lined up side by side with last generation’s Snake Eater or Sons of Liberty, Peace Walker’s character models hold up. Little details stand out, such as the little flecks of gray in Big Boss’s beard. The backgrounds are serviceable, though there’s noticeably less detail in those compared to character models. When it’s all combined, you can tell that Kojima’s development team is pushing the limitations of the PSP hardware.

The audio for any Metal Gear game can really be broken down into three parts: sound effects, voice acting, and musical score. Sound effects for war-related games are pretty standard, and there’s nothing out of the ordinary here; gun shots whiz, explosions boom, and footsteps grind against dirt and foliage. The musical score takes a lot from the previous games in the series by using a mix of electronic and symphonic elements. It’s less bombastic than Guns of the Patriots, but carries on the traditions and themes established by prior cannon.

For voice acting, the Metal Gear series is among the industry’s flag bearers and Peace Walker is no different. David Hayter reprises his starring role in the series and his performance meets the standard established by previous titles. Other actors (both new to the series and returning cast members) do their job well, but the Hayter’s grizzled Big Boss is once again the star of the show. (Note: For long-time series fans that want to avoid spoilers, don’t look at the names in the opening credits as you’ll probably recognize the voice actors of key series figures.)

It wouldn’t be a Metal Gear game without cutscenes, and while some cutscenes are told using in-game models, a lot of story moments use the motion-comic style first seen in Portable Ops. This moves the plot along well, sometimes more efficiently than the cinematic cut scenes from previous games. Peace Walker implements some interactivity into the motion comics, with minimal God of War-style quicktime events and unique pan/zoom capabilities to reveal optional plot details. The art style is based on the style of series character designer Yoji Shinkawa, so it blends well despite the transition from 3D character models and 2D pencil drawings.

While there’s some learning curve to get into Peace Walker, the streamlined and refined controls from Portable Ops make this PSP excursion much more fun to play. Both story-centric missions and side missions are designed in bite-size goals, making for portable-friendly 10-to-15 minute excursions. The missions vary and use a variety of equipment and skills, from sneaking through enemy lines to fire fights with vehicles to recruiting and reconnaissance. Peace Walker carries on the Metal Gear tradition of stealth to get through missions, though the improved CQC and camera controls make the combat side of the game enjoyable rather than frustrating or tedious. The improved camera controls also make sneaking easier, though unlike prior Metal Gear games, Peace Walker doesn’t allow you to crawl. You can run, crouch, and move while crouching but you remain static while laying dying.

All of this affects the camouflage meter, which reflects how well you can hide from opponents. Prior to each mission, you select your equipment and weapons, including your camouflage outfit. Additional briefing files are available for each mission, and this provides hints on how best to select everything from camo to guns. Because of Peace Walker’s bite-size missions, even if you select inappropriate equipment, it’s easy to quit, re-equip, and begin the mission again. Not only does this make things pretty forgiving, it allows for flexibility to experiment with different weapons.

Next to its control scheme, one of the other biggest problems with Portable Ops was its NPC recruiting. In that game, Big Boss had to knock out opponents, then stealthily drag their bodies to a pick-up point. This was a tedious aspect of gameplay, but Peace Walker uses a simplified mechanic called the Fulton Recovery System. Using the Fulton, Big Boss ties a harness to the NPC and they’re whisked away into his Mother Base camp.

Why is this important? Mother Base adds an almost Sim City-style management experience. This was touched upon in Portable Ops, but it’s really explored more in Peace Walker. All of your recruits have different skill sets, from being a technician to a cook. Recruits are assigned to different camp areas, and this drives your available equipment, group morale and recruit health (and thus, availability for side missions). For completionist gamers, Peace Walker can easily provide an additional 50-to-75 hours on top of its 15-hour core story.

It sounds simple when these features are introduced one by one via small tutorials. There’s surprising depth and flexibility to this and with the ability to replay missions, you can literally spend hours capturing recruits, assigning them to new roles, and collecting new technology and weapons.

While every mission can be played solo, many Peace Walker missions — both story-centric and optional — can be played co-op with up to four players. Peace Walker tries to build a sense of community by allowing you to send equipment to other players, letting you aid them while offline. Co-op makes some missions much easier and even tactical, such as when a team of players take on a big vehicle surrounded by enemy soldiers. There’s also a versus mode that uses mission maps unlocked as you beat them. It should be noted that for this review, my PSP’s network hardware was on the fritz, so I had very limited exposure to this.

Metal Gear Solid: Peace Walker pushes the abilities of the PSP hardware, but it’s not just a technical achievement — it’s a lot of fun to play, for both series neophytes and for gamers that know the difference between The Patriots and The Philosophers. Kojima’s team has learned the lessons first explored in Portable Ops, refined the game’s core mechanics, added a management sim aspect on top of it, and wrapped it around a story that’s accessible while adding to the deep Metal Gear mythology. It’s quite a task to tie together pivotal series moments ranging from the original eight-bit Metal Gear, the Cold War-era Snake Eater, and the timeline-concluding Guns of the Patriots, but Peace Walker pulls it off in an inventive and satisfying package.

By Mike Chen
Tags: Metal Gear
This entry was posted on Thursday, June 24th, 2010 at 1:45 pm and is filed under Mike Chen, Video Game Reviews. You can follow any responses to this entry through the RSS 2.0 feed. Both comments and pings are currently closed.