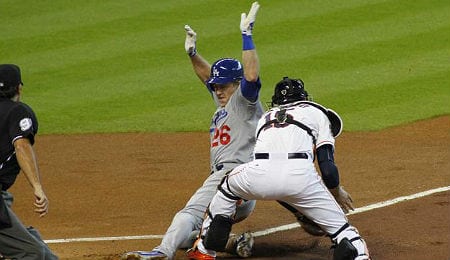 And we are back, with another week of Fantasy baseball waiver wire selections. CC Sabathia’s tough season just hit another snag as he got hurt on Saturday; Joc Pederson’s slump has landed him on the bench in L.A.; and Mike Fiers says he did not have any foreign substances on his glove when he tossed his no-no.

Gregor Blanco, OF, San Francisco Giants (ESPN: 18.8 per cent: CBS: 19 per cent): Blanco has been hitting very well, but he’s now been dropped in the order and the Giant outfield will soon be crowded, so this is a short-term add while Angel Pagan remains out. Blanco isn’t see as much action as he did last year, but he’s never done a better job of getting on base and he’s providing periodic productivity (see video below).

Chase Utley, 2B, Los Angeles Dodgers (ESPN: 25.3 per cent; CBS: 34 per cent): After being taken in the first round in 2000, Utley spent his entire career with the Phillies until last week when he was dealt to the Dodgers. He’d been extremely hot before the trade and should get plenty of chance to play in L.A., although he hasn’t exactly made a great first impression (1-for-8).

Ryan Vogelsong, SP, San Francisco Giants (ESPN: 14.4 per cent; CBS: 18 per cent): We gave Vogelsong some Troll love at the end of May after he looked so dominant that month. He logged even more innings in June, racking up some decent K numbers before looking much sharper in limited innings in July (as he was removed from the rotation for a spell). August hasn’t been as kind, but Vogelsong has looked great in his last couple outings and again finds himself a full-time member of the Giant rotation with Chris Heston being farmed out.

Kevin Jepsen, RP, Minnesota Twins (ESPN: 16.9 per cent; CBS: 19 per cent): The Twinkies landed Jepsen from the Rays at the trading deadline to shore up their set-up options behind closer Glen Perkins, but with Perkins suffering a neck injury shortly thereafter, Jepsen found himself closing. Perkins could be done for the season, making Jepsen a fantastic add for those seeking saves.

John Axford, RP, Colorado Rockies (ESPN: 28.7 per cent; CBS: 29 per cent): Yes, it was just two weeks ago that we touted Tommy Kahnle as the new closer in Colorado, but he immediately stunk it up and the team has now returned to Axford for ninth inning duties. Axford, who has seen very steady usage the past couple of years, has been burned for more losses and blown saves this year, and his WHIP and ERA both tell a gruesome tale. However, with three scoreless outings — the most recent resulting in a save — out of his last four appearances, he seems to have turned the corner. It’s not like it would take much for Axford to be better than he was in July, but if he can regain a firm grasp on the job, he’ll be useful down the stretch.

Kris Medlen, SP, Kansas City Royals (ESPN: 3.9 per cent; CBS: 28 per cent): Medlen finally came off the DL about five weeks ago, and after pitching in relief since then, he’s going to get a crack at starting with his first outing on Monday. He’ll likely be on a pitch count for his first start, but we like the matchup against Baltimore — a team that tends to pile up the whiffs against righties. If Medlen gets a regular turn in the KC rotation from here on out, he could be gold.

Kolby Allard, SP, Atlanta Braves (ESPN: NA; CBS: Unowned): At this time of season, it’s not uncommon for many owners to have given up on the current campaign, but be squarely focused on the future if they’re playing in a dynasty league. With that in mind, take a look at the Braves’ first rounder from this season, Allard. The southpaw just turned 18 a couple of weeks ago, so he’s way down in the GCL, but man, is he having his way there. Through three starts comprising six innings, Allard has surrendered one hit and nary a run, fanning 12 against zero walks. Um, clearly he’s ready for the Appalachian League. You may not have heard much about Allard yet, but that will soon change.

Mike Minor, SP. Atlanta Braves (ESPN: 1.1 per cent; CBS: 11 per cent): Keeper league owners can breathe easier now with news that Minor (shoulder) will kick off a throwing program in early September. Yes, there are massive risks here, but look at this way: you can pluck a potential quality starter for 2016 off the wire for next to nothing right now.

Mark Canha, OF/1B, Oakland Athletics (ESPN: 5.9 per cent; CBS: 15 per cent): Canha has hit safely in 13 of his last 14, culminating in a base-loaded triple on Sunday as part of a four-RBI day. This rookie looks poised to finish strong.

Tyler Glasnow, SP, Pittsburgh Pirates (ESPN: 2.4 per cent; CBS: 21 per cent): The rich get richer. The Pirates have yet another stud pitching prospect nearly ready in Glasnow, who continues to mow down hitters since arriving at Triple-A (11.2 K/9 through five starts). Taken in the fifth round in 2011, this kid looks like a steal for the Buccos.

By RotoRob
Tags: Chase Utley, Gregor Blanco
This entry was posted on Sunday, August 23rd, 2015 at 11:33 pm and is filed under BASEBALL, RotoRob, The Wire Troll. You can follow any responses to this entry through the RSS 2.0 feed. Both comments and pings are currently closed.