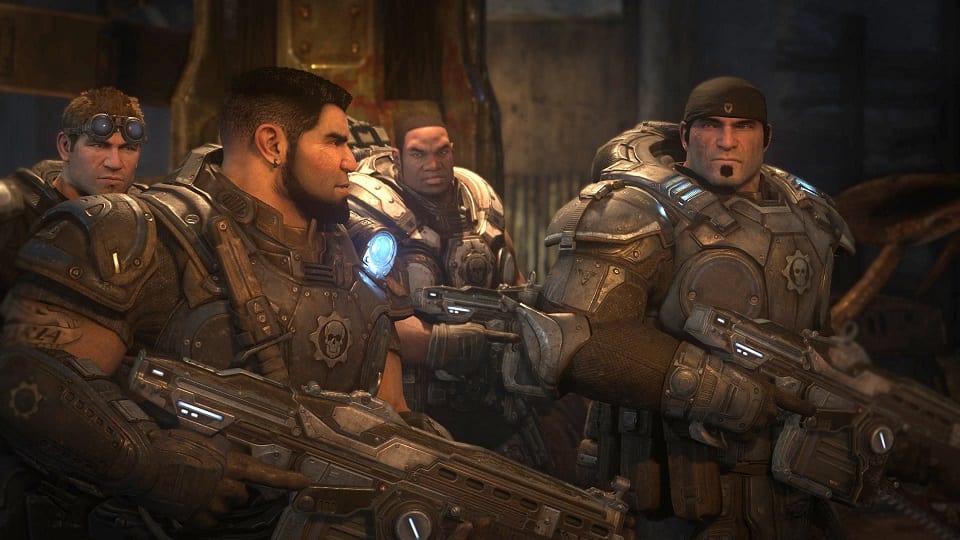 As we’ve noted before, Gears of War was the game that convinced us it was time to purchase an Xbox 360. It looked the part of a next-gen title, and it was one we played through multiple times. Time often isn’t kind to shooters, however, so the move to bring the original to Xbox One as Gears of War Ultimate Edition carried some risk. Is Delta up to the challenge? Gear up and let’s find out.

There isn’t a lot of subtlety to Gears, a game in which ammo storage for the lancers tops out in the mid 600s and crates are plentiful. That’s not to suggest there are problems with the aiming; it’s just that enemies take a ton of bullets and like to move in some semi-absurd patterns to evade gunfire. When grabbing the snub pistol or longshot, you’ll be able to make small adjustments and pinpoint distant grubs — and yes, popping Locust heads is just as satisfying now as it was in 2006.

Active reload also holds up very well. For those that are new to the series, when reloading there’s a small sweet spot when, if you tap the reload button again at the proper time, you’ll slam another clip in much quicker and it’ll do additional damage as well. The timing did feel infinitesimally off, which led to a lot of jammed clips and profanity from Marcus (and us), but perhaps we were just rusty.

Roadie running and moving from cover to cover remains an inexact science, occasionally leaving you out in the open or climbing over something for a quick death. It’s generally pretty responsive, though, and only on higher difficulties are you likely to run into a notable amount of deaths in this manner. We’ve played through four games that have essentially used the same controls, so it was very easy to jump back in on the Xbox One version and not miss a beat.

With its linear progression and lack of many open areas, the Gears series always managed to rank among the best looking games on last gen with detailed environments and visceral combat. It looks even more impressive now with fully remastered 1080p visuals for the Xbox One — this treatment not only covers the gameplay itself, but also all the cut scenes, so there are no awkward transitions. Everything looks very crisp, a sure sign this wasn’t a rush job.

Although it’ll never be held in the same reverence as Halo for its audio, the Gears of War series has instantly recognizable music and, perhaps more importantly, weaponry and/or actions. The sound of popping a locust head, nailing an active reload or revving up your chainsaw bayonet are all perfectly done and withstand the test of time flawlessly. Marcus’ gruff voice is another calling card along with the hissing cries of the Theron guard. Great stuff.

If you’ve never played the campaign for Gears of War, here are the broad strokes: A race of aliens called Locust emerged from underground to wage war on the human populous of Sera, and the aliens are winning. It’s all hands on deck, so you (Marcus Fenix) are freed from a cell where you were being held for treason by old friend Dominic Santiago and thrown back into the fight. You’re rolled into Delta Squad, where you’ll eventually be paired up with Damon Baird and Augustus Cole.

This foursome is tasked with deploying a resonator, which is used to map Locust tunnels beneath the surface. That data will then be used to detonate a Light Mass bomb that will destroy the subterranean threat once and for all. At least, that’s the plan.

There’s plenty of solid fiction to draw upon with the Gears universe, and one of the nice selling points for those that have played through the 360 version many times is the addition of five chapters that were previously only available on PC. Dropped in at the start of Act Five, these offer a more complete version of the game’s events and in no way feel tacked on. They add roughly an hour of additional gameplay and include one of the game’s most challenging fights: a showdown with a Brumak.

Unlike so many shooters, we’ve always felt the campaign is the strongest part of Gears, and even after nearly a decade it really holds up well. Our lone complaint is teammate A.I., which at times was so atrocious it seemed broken with squad members nowhere to be found, standing in the open and not shooting or just waiting at some arbitrary point and contributing nothing. Co-op is the best way to play, though it’s worth noting that, unlike later iterations, this one only supports two players.

Multiplayer has been beefed up with all post-launch DLC and more PC exclusives to bring the total of available maps to 19. It’s also added a couple of new modes and a bunch of weapon skins so you can customize your weapon loadouts. What hasn’t changed is the core gameplay, which very much remains an acquired taste.

No matter which map or mode you’re playing, most games revolve around diving around and trying to rip your opponents apart with the gnasher. If you’re into that run-and-gun style, it’s great. If you’re not and prefer something more tactical, it can try your patience. The lancer, which defines the campaign, is nearly useless here. As is cover-based combat, the series’ hallmark. There has always been a very sharp divide between single and multiplayer, and it still exists.

Gears of War Ultimate Edition is another reminder that not all remasters are created equal. With upgraded visuals, added campaign content and a loaded multiplayer, there’s a ton to sink your teeth into. It’s a good buy for newcomers and series veterans alike.