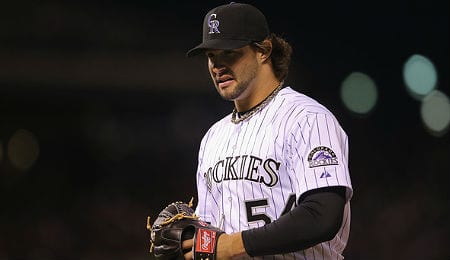 Tommy Kahnle is getting his chance to close out games. (Roxwalkoff.com)

Welcome back to another week of Fantasy baseball waiver wire selections. Randy Johnson’s number has been retired by the Snakes; Miami’s Jose Fernandez is hurt again; and Nationals outfielder Denard Span (back) suffered a setback in his recovery. Every day, it seems, there are factors at play that will affect how you analyze sports betting tips.

And now on to this week’s picks…

Tommy Kahnle, RP, Colorado Rockies (ESPN: 9.4 per cent; CBS: 12 per cent): Talk about a dude that’s been totally off the Fantasy radar until now, Kahnle has usurped the struggling John Axford as the new closer for the Rox, and all indications are he’ll be earning saves for the remainder of the season. Kahnle certainly has the overpowering stuff (35 Ks in 27 2/3 IP) for the job and he didn’t have a cakewalk for his first save on Friday, whiffing Bryce Harper to close it out (see video below).

Henry Owens, SP, Boston Red Sox (ESPN: 15.3 per cent; CBS: 31 per cent): Times sure have changed for Boston, haven’t they? Last week, the Sox sent rookie starters to the mound against the Yankees for all three games of their series. Owens certainly was not awful, showing enough promise to suggest he can be an asset down the stretch.

Welington Castillo, C, Arizona Diamondbacks (ESPN: 26 per cent; CBS: 38 per cent): After doing next to nothing offensively for the Cubs, Castillo was traded to the Mariners, for whom he flashed absolutely zero extra-base pop. He was almost immediately dealt again, landing in Arizona in a three-team deal, and since then, he’s been on a tear like we’ve never seen — especially power-wise. Castillo had mashed six homers in nine games before Saturday and he’s been amazingly productive as a D-Back. It’s time to take this seriously.

Domonic Brown, OF, Philadelphia Phillies (ESPN: 10.2 per cent; CBS: 20 per cent): The Phillies have been playing much better lately — even climbing out of the NL East cellar — and one of the big reasons why has been the revitalization of Brown. Before Saturday, he had smoked four homers in eight games — his first dingers of the season, believe it or not. Remember what this guy is capable of when he gets super hot. Just sayin’….

Andre Ethier, OF, Los Angeles Dodgers (ESPN: 33.1 per cent: CBS: 47 per cent): Ethier sat Saturday, but he’s been getting regular PT for the Dodgers, and has definitely taken advantage. He had a nice May (874 OPS) before cooling in June. Ethier bounced back in July, but has really turned it on in August with a 942 OPS. Food for thought: last year, he scored 29 runs in 130 games; this year, he already has 40 in less than 100 games.

Mark Lowe, RP, Toronto Blue Jays (ESPN: 4.1 per cent; CBS: 3 per cent): Lowe has always racked up a good amount of strikeouts, but he was averaging a career-best 11.75 K/9 before landing in Toronto, and since becoming a Jay he’s being used in high leverage situations. Need holds with a potential crack at some saves? Lowe can help.

Chris Bassitt, SP, Oakland Athletics (ESPN: 12.4 per cent; CBS: 20 per cent): Drafted by the White Sox in the 16th round in 2011, Bassitt is armed with a sweet fastball that hovers in the 92 to 96 mph range. The A’s, who landed him as part of the Jeff Samardzija trade last year, may have found another diamond in the rough.

Yangervis Solarte, 2B/3B/1B, San Diego Padres (ESPN: 26.2 per cent; CBS: 40 per cent): Solarte bounced around the minors before emerging last year with the Yankees and then getting dealt to the Padres. He mashed two dingers Monday and has hits in five of six games since then, but has been especially potent (799 OPS) on the road. Solarte can fill a lot of backup gigs because of his multi-position eligibility.

Odubel Herrera, OF, Philadelphia Phillies (ESPN: 12.4 per cent; CBS: 27 per cent): Herrera got a Wire Troll nod from us in mid-April when he stormed out of the gate quickly. He cooled considerably in May, but has gotten better and better since then, batting .400 in August and hitting safely in 12 straight games.

Tyler White, DH, Houston Astros (ESPN: NA; CBS: NA): Houston’s 33rd round pick in 2013, White was very productive at Double-A, earning a promotion to Triple-A a few weeks ago. All he’s doing there is batting .359 through 30 games. White, 24, is forcing his way into the Astros’ plans, so keep an eye on him in keeper leagues.

By RotoRob
Tags: Arizona Diamondbacks, Colorado Rockies, Fantasy Baseball, Randy Johnson, Tommy Kahnle
This entry was posted on Sunday, August 9th, 2015 at 11:16 pm and is filed under BASEBALL, RotoRob, The Wire Troll. You can follow any responses to this entry through the RSS 2.0 feed. Both comments and pings are currently closed.