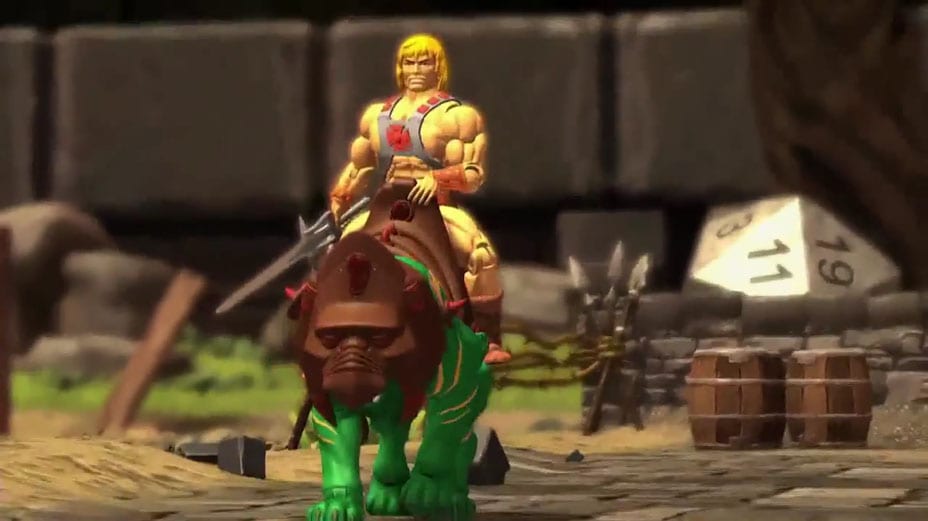 It’s HE-MAN! Now if we could only find Prince Adam!?

A few years back, our friends at Signal Studios dug deep into childhood fantasy with Toy Soldiers, a hybrid tower defense/action game centred around the wonderment of imagination. Now Signal is teaming up with Ubisoft for Toy Soldiers: War Chest, a game in which we’re able to dig even deeper into the box of toys and pull out some pretty neat things, including some very cool cameo action.

War Chest, like its predecessors, lets you employ a variety of toys while on the battlefield, whether it’s a squeaky-treaded tank, a fire-breathing dragon or a number of powerful heroes. Controls for each type of unit are pretty uniform in their function: movement and camera actions are bound to the sticks, and scoping in and firing are done with the triggers. While in the default build mode you can zoom with the right stick to really get a good look at the figures and turret details.

Highlighting and selecting a turret can be a bit of a challenge because the small ring that acts as your cursor is very faint and difficult to see on many of the maps. This problem somewhat corrects itself, as there is sort of a “snap to unit” feel when guiding the cursor to a turret or dragon, but it’d still be nice to have a clear indication of what we’re about to highlight, especially as most of the build actions are done using peripheral vision while keeping an eye on the approaching enemy.

Visually, things are somewhat of a mixed bag. Unit detail and animation are great and very fun to watch, but the foliage strewn about the stages stands out among the otherwise finely done scenery. There is also a bit of trouble with the frame rate, mostly during later rounds when multiple spawn points are just regurgitating enemies, which actually brings us to this point: They did such a fine job making the toys look like toys (complete with joints, screws and varying styles of paint) that we almost felt that the frame rate issues were unforgivable because we kept thinking, “C’mon, these are just toys!” — forgetting they’re actually 3D models taxing a systems resources.

Variety between the different factions you can select is drastic and pretty. The Dark Lord has much fire at his disposal, as well as dragons and dinosaurs. Starbright, on the other hand, has faeries and bubbles everywhere.

The sound design is mostly effective, with only a few minor complaints. The Dark Lord standard turret (Anti-Infantry) has one of the most annoying gun sounds in a game, rapidly spouting “PAK PAK PAK PAK PAK.” The music usually takes a back seat to the visual chaos, but summoning in your hero plays a unique fanfare accurate to their toy line’s universe.

This is even more true if you happened to have purchased the DLC characters He-Man, Ezio, G.I. Joe and Cobra Commander, because once you summon them you get treated to a variant of the chosen show’s theme song. Nostalgiaaaaaaaaaaaaa!

Toy Soldiers: War Chest follows its lineage’s path and shows that with a little bit of effort and care that a simple tower defense game can be so much more. Once you select a hero and mission (and even buy more toys with microtransactions or using points you accumulate while playing), you start to build towers.

Towers come in a few varieties including an Anti-Infantry turret, an Anti-Armour turret, a gigantic Big Bertha turret, etc. You may upgrade all of these on-the-fly while playing, and can also jump into the gunner’s chair to take care of business yourself, mowing down waves upon waves of Ezio’s hidden Assassin troops or the Dark Lord’s knightly forces.

Keep enough enemies from harming your toy box and victory is yours! Nothing really matches being caught in a dire situation with toys at your box-step and you finally rack up enough special energy (gained by chaining kills together) to summon your hero and begin to decimate the enemy forces.

You can also have a blast with a friend in co-op mode, or go for the full shebang with four players. Each side takes a turn going on the offense and defense, complete with hero and vehicle usage, so it can get pretty intense trying to protect your towers while trying to hunt down the enemy supertoy. Save up enough cash while you are defending, then you can dump some serious funds into creating a mad wave for your opponent to contend with.

Maybe with some luck we will get even more franchises on board with Toy Soldiers: War Chest, because just how cool would it be to control the Ninja Turtles or Mighty Max? Regardless, as it stands right now War Chest is a very fun, incredibly unique game with only a few very minor issues.

By Jeff Cater
Tags: Toy Soldiers, Video Game Review, War Chest
This entry was posted on Saturday, August 22nd, 2015 at 4:05 am and is filed under Jeff Cater, Video Game Reviews. You can follow any responses to this entry through the RSS 2.0 feed. Both comments and pings are currently closed.