The Wire Troll: Chad Bettis is Rocking for Rockies 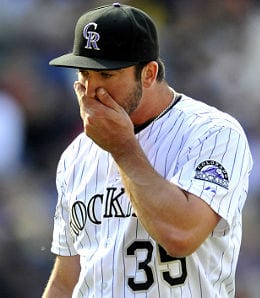 Chad Bettis is on a serious roll for the Rox. (AP Photo/Jack Dempsey)

It seems that injuries are mounting faster than ever, which of course you are well aware of if you are a Fantasy owner. Matt “Big City” Adams is the latest victim, as the big man has a torn quad and could miss the rest of the season. Here are some names you might want to look at to boost your team and, of course, your own morale as the injury bug continues to bite:

Chad Bettis, SP, Colorado Rockies (ESPN: 6.6 per cent; CBS: 10 per cent): No, he’s not related to legendary Pittsburgh Steelers running back Jerome Bettis, but Chad is rolling like The Bus over his last two starts. He took a no-hitter into the eighth in Philadelphia on Friday (losing it because a shift didn’t work out — see video below) on the heels of a near-complete game effort against San Francisco. And yes, the start against the Giants was at Coors Field.

Mark Reynolds, 1B/3B, St. Louis Cardinals (ESPN: 2.8 per cent owned; CBS: 7 per cent owned): Reynolds has always been an all-or-nothing guy, but unless the Cards swing a Ryan Howard trade, Reynolds is their first baseman for the foreseeable future with Adams going down. Reynolds is a serious power bat, but you’ll have to live with low average and on-base numbers and a ton of strikeouts. Still, he’ll have plenty of run-producing opportunities in one of baseball’s deepest lineup.

Mike Wright, SP, Baltimore Orioles (ESPN: 33 per cent; CBS: 46 per cent): Wright has been a very popular pickup lately. He wasn’t dominant in his most recent start against Tampa Bay, but prior to that did not permit an earned run in two starts spanning 14 1/3 innings. The Orioles’ rotation has been sub par this year, meaning Wright should continue to get some starts for the time being.

Brett Lawrie, 3B, Oakland Athletics (ESPN: 23.3 per cent; CBS: 40 per cent): The fiery Lawrie’s bat is finally starting to match his glove, with homers in back-to-back games against the Yankees.

Joey Butler, DH, Tampa Bay Rays (ESPN: 0.5 per cent; CBS: 1 per cent): Butler has had a nice little stretch of late and as the Rays give him more looks, perhaps you too should give him one.

Michael Taylor, OF, Washington Nationals (ESPN: 2.9 per cent; CBS: 20 per cent): Taylor was off to an impressive start before being unceremoniously shipped to the minors, but is back with the big league club, and could get a few more at-bats with Jayson Werth on the shelf for a while. Taylor has a good outfield arm and some pop in his bat.

Steve Clevenger, C, Baltimore Orioles (ESPN: 0.1 per cent; CBS: unowned): Clevenger may not be around too long, but he’s had a couple of good games since his recall and there is still uncertainly surrounding Matt Wieters’ return.

Kevin Pillar, OF, Toronto Blue Jays (ESPN: 14.1 per cent; CBS: 25 per cent): Lots of owners dumped Pillar in his recent slump, but he’s waking up now with four hits, four runs, two walks, a homer and a double over the last three games. As a 32nd round pick from 2011, he’s done pretty well for himself.

Ryan Vogelsong, SP, San Francisco Giants (ESPN: 17.7 per cent; CBS: 38 per cent): Just over a year ago, we recommended Vogelsong as a waiver wire pickup, and it wasn’t our finest hour as June turned out poorly for him before he was better in July and then superb in August. Still, you can’t ignore how dominant he’s been this month.

Jason Rogers, 1B, Milwaukee Brewers (ESPN: 0.1 per cent; CBS: unowned): With Adam Lind’s back acting up again, NL-only owners may want to give Rogers a shot. He’s been doing a fine job as both a pinch hitter and part-time starter, smacking his first career homer earlier this month.

Steven Moya, OF, Detroit Tigers (ESPN: 0.2 per cent; CBS: 4 per cent): This is more of a dynasty league recommendation, but it’s worth noting that after a slow start and some injury issues, Moya is heating up at Triple-A. After a three-hit, four-RBI showing on Saturday, he’s now batting .310 with 10 RBI and nine runs over his last 10 games. Moya hasn’t flashed any speed this year, and his on-base skills leave something wanting, but if power is your need, this is your man.

Aaron Sanchez, SP, Toronto Blue Jays (ESPN: 29.6 per cent; CBS: 38 per cent): Sanchez has racked up three straight quality starts, and while he continues to adjust to returning to the rotation after pitching exclusively out of the pen for the Jays last year, he seems to be settling into a groove.

Ryan Goins, SS, Toronto Blue Jays (ESPN: 0.5 per cent; CBS: 1 per cent): With 2B Devon Travis (shoulder) out for at least the next week and Steve Tolleson heading to the DL, Goins is going to get more consistent PT, making him an option in an AL-only leagues. Goins has hit safely in three straight games, mashing a double on Saturday.

Ivan Nova, SP, New York Yankees (ESPN: 2.6 per cent; CBS: 11 per cent): Nova’s recovery from Tommy John surgery is coming along nicely as he’ll make just one more appearance at extended Spring Training before heading out on a rehab assignment. He’s still relatively young, so there may be some upside here yet.

Blaine Boyer, RP, Minnesota Twins (ESPN: 1.9 per cent; CBS: 2 per cent): Boyer has worked his way into a top set-up role in Minny, even earning his first save Saturday with closer Glen Perkins needing a day off. Not bad for a dude that needed to sign a minor league deal to get a job. Boyer doesn’t get many Ks, but is sixth in the AL in holds.

Crave more in-depth Fantasy analysis? Then join us every Thursday at 9 p.m. EST for RotoRob Fantasy Baseball Weekly Podcast on Blogtalkradio as we entertain and edify you for an hour or more each week. We’ll be off again this week, but will return live on June 11 featuring guest Chris Wassel, the host of Fantasy Hockey X. Tune in here.

By Michael Seff
Tags: Chad Bettis, Colorado Rockies, Matt Adams
This entry was posted on Sunday, May 31st, 2015 at 2:52 pm and is filed under BASEBALL, Michael Seff, The Wire Troll. You can follow any responses to this entry through the RSS 2.0 feed. Both comments and pings are currently closed.