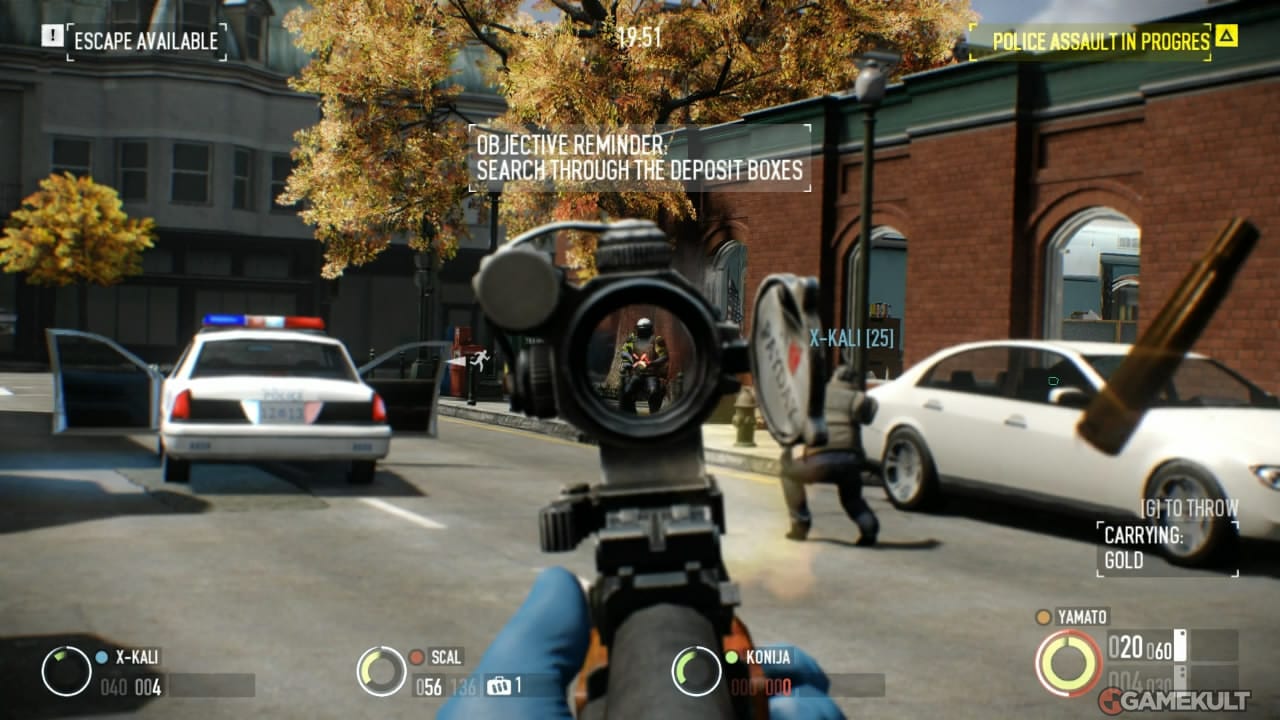 This screenshot is doctored. No one hits anything with a scope.

Back in 2013, OVERKILL released a follow up to its cult hit Payday: The Heist. The sequel showed up with more guns, more heists and fantastic multiplayer, but it still came with a few issues of its own. In PAYDAY 2: Crimewave Edition, we are flung back into the vaults, furiously sawing locks, yelling at civilians and dodging the cops at every turn. Several issues found in the first iteration of PAYDAY 2 were solved, such as interacting with hostages and objects, but…

…there are still a few things that should’ve been ironed out. In the original, controls were perfectly responsive but lacked terribly in one area: the dead zone of the right stick. It seems that it takes too much of a push to get the camera to move and tuning the stick sensitivity in the menu didn’t rectify the problem. Unfortunately, it has not been addressed in this version of the game, either.

This leads to bullets missing their mark because you have to nudge the stick a certain (very sizeable, in the moment) distance before you get any look acceleration at all. Then, the crosshair just jumps to the other side of your target because there’s no sweet spot between no-and-low acceleration, with the low being too high. This becomes manageable with experience, but it made us feel like we wasted hundreds of thousands of virtual dollars upgrading the character to have better aiming skills.

Virtually everything else is identical or touched up. Movement of the left stick felt more responsive, as did jumping and interacting with objects. They’ve made it much easier to lock onto objects you want to use rather than something that may be a fraction of an inch closer to you, so there’s less fumbling around when there’s an ammo bag, medical kit and bags of gold all in a close proximity. When you’re tossing bags to one another it’s noticeably easier to catch them mid-air, which can save precious seconds and huge segments of your health.

PAYDAY 2: Crimewave Edition won’t drop jaws, as it looks nearly identical to its predecessor. The framerate is even curiously locked at 30 FPS, which is pretty unforgivable considering how beasty the Xbox One and PlayStation 4 are.

That’s not to say it isn’t a good looking game, it just doesn’t have much added flair for our new consoles to chew through. The shadows do look sharper and texture resolutions have been upped — and there’s a stupid amount of kickass new masks and materials to throw on.

The soundtrack of PAYDAY 2 was one of the things we liked the most about the game and what we believed to be one of the series’ highlights. With this new edition, a bunch of crunchy, thumping tracks have been added that really get your heart rate up and perfectly bed any of your crimes.

Before shit really goes down and the police start sending reinforcements, you’re treated to catchy, spy-like beats that quickly amp up when gas starts flooding the bank, or helicopters start landing across the street. Guns are equally as visceral as the soundtrack, and the vocals give an air of panic and suspense.

You know what? Forget what we wrote above. PAYDAY 2’s all about that cash, baby! And getting that cash is incredibly fun. Through hails of police gunfire, you’ll find you and your crew cooking up meth (Heisenberg!), smashing glass encasements to nab some fat jewels, breaking out a character from lock-up (Hoxton, from Payday: The Heist!!!) and getting away with it as clean (and rich) as possible.

The mission structure can consist of a single day, in which, for example, you run into a bank, blow the door and make off with the cash… maybe! Sometimes your stupid driver forgets his prescription sunglasses and crashes your asses into a concrete statue, so you’ve got to wait for Driver B to get to your location while you fend off the cops.

Sometimes operations will take multiple days, building up to an intense conclusion and generally a significant payout. Framing a senator isn’t at all easy, nor is stealthily bugging his house to blackmail him. But hey, who wouldn’t go through hell for an extra $780,000 at the end of the day?

Then the question becomes: what do you spend that hard-earned cash on? Well, now we can actually employ our offshore bank account to try to obscure loot drops that we desire. For example, betting $4.5 million for the chance to get an Infamous Mask drop and the ability to pay more to further up the odds. You can also spend cash on tailoring a mission to your liking, such as picking the exact heist and difficulty you want your crew to play rather than simply browsing Crime.net for 20 minutes waiting for a gold heist.

Either way you choose to start up a mission, it’s going to end up being fun, because the co-op mechanics of PAYDAY 2 is still consistently fresh. Getting a familiar crew together and figuring out one another’s skill trees and strengths is interesting and vital to success on the streets. Does your technician have the shape charges, yet? He does?! Then why the hell are we waiting for this damn drill, blow the door!

They have also added another skill tree to stat into, which is more of a lone wolf type called “The Fugitive.” That tree is all about making bullets hate hitting you, and it offers a great fifth style to blend into the other four. Several guns and attachments have been added, my personal favourite being the Tommy Gun because, well, it’s a fu**ing Tommy Gun (the scope is still worthless, though).

Despite the problems with stick sensitivity (and, oh yeah, single-player remains sub par) PAYDAY 2: Crimewave Edition is a wonderful game and exciting experience — still, its few tiny issues really could have (and should have) been fixed here.

By Jeff Cater
This entry was posted on Monday, June 29th, 2015 at 6:22 pm and is filed under Jeff Cater, Video Game Reviews. You can follow any responses to this entry through the RSS 2.0 feed. Both comments and pings are currently closed.