The Wire Troll: Carlos Beltran Looking Like His Old Self 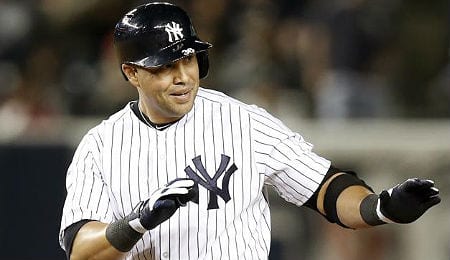 Carlos Beltran is getting a lot more at-bats for the Yankees this season. (Thegreedypinstripes.com)

Well, July has nearly crept up on us, but if you are sulking in the sadness of a poor first half for your Fantasy season, fear not, we are here to help. If you listened to our Podcast on Thursday we clued you in on the Diamondbacks’ Rubby De La Rosa, but alas, he does not qualify for this week’s Wire Troll as his ownership has exceeded 50 per cent, and — unlike many sites — we believe in only recommending players that are actually available. Yes, we’re wacky that way. Still, there are plenty of solid options provided to save you before it gets too late.

Carlos Beltran, OF, New York Yankees (ESPN: 38 per cent; CBS: 48 per cent): We can at least temporarily curb the “Beltran is too old, he’s lost it” chatter, because the Yanks’ veteran outfielder is starting to rediscover his stroke. ESPN owners are taking notice, as Beltran has experienced a 15.9 percentage point spike over the past week with a five-game run in which he recorded four multi-hit games and swatted two homers. Better yet, he loves his parents (see video below).

Marlon Byrd, OF, Cincinnati Reds (ESPN: 21.4 per cent; CBS: 36 per cent): Since returning from the DL, Byrd has started to rake with several big games this week. He has plenty of power even at the ripe age of 37, which is further aided by playing at Great American Ballpark.

Roberto Osuna, RP, Toronto Blue Jays (ESPN: 19.2 per cent; CBS: 25 per cent): Osuna’s ESPN numbers are up 15 percentage points given the Jays’ current conundrum at closer. He may be an answer after a dominant six-out save against Tampa Bay in which he struck out five, but Manager John Gibbons has not officially anointed a closer. After a nearly flawless four-out save against Texas on Sunday, Osuna is starting to look like the Jays’ go-to man in the ninth inning.

Kyle Gibson, SP, Minnesota Twins (ESPN: 17.8 per cent; CBS: 33 per cent): Gibson has been inconsistent for much of the year, but a solid outing in Milwaukee on Saturday was his third straight strong effort, and like Milone, Gibson may be starting to turn a corner as the midway point approaches.

Andrew Heaney, SP, Los Angeles Angels (ESPN: 5.9 per cent; CBS: 32 per cent): Heaney was outstanding in his Angels debut on Wednesday and the former Marlins prospect might get a few more starts with Jered Weaver currently sidelined.

Jackie Bradley Jr., OF, Boston Red Sox (ESPN: 0.7 per cent; CBS: 4 per cent): There was a time when it seemed the Red Sox had far too many outfielders to function, but injuries and ineffectiveness have provided opportunities to players that didn’t begin the year with the team like Alejandro De Aza and Bradley. Bradley has made an impact with his bat in a few games since his second recall of the season.

Kendall Graveman, SP, Oakland Athletics (ESPN: 13.2 per cent; CBS: 44 per cent): Graveman has been outstanding of late and has started to rack up some strikeouts over the course of five consecutive quality starts. Suddenly, the Josh Donaldson trade that sent Graveman and Brett Lawrie west isn’t looking so bad.

Adam Morgan, SP, Philadelphia Phillies (ESPN: 1.7 per cent; CBS: 2 per cent): Given the dismal mess that is the Phillies season, for young pitchers like Morgan this is akin to pilot season for aspiring actors. The southpaw was outstanding in outdueling Michael Wacha and the Cardinals in his big-league debut last Sunday before rain cut short his second start. Given the likely departure of Cole Hamels, Morgan is likely to stick around for a little while.

Greg Garcia, IF, St. Louis Cardinals (ESPN: 0.1 per cent; CBS: unowned): Playing time might be hard to come by initially for Garcia, but he has made the most of his sporadic opportunities, and given the Cardinals’ sizable lead in their division and an injury bug that has struck on a number of occasions, he might start seeing some more at-bats. There’s no reason to believe he won’t at least eclipse the light-hitting Pete Kozma as the next infielder in line if someone needs a day off. Consider Garcia in very deep NL-only leagues.

David Carpenter, RP, Washington Nationals (ESPN: 0.3 per cent; CBS: 1 per cent): We considered Carpenter a top 70 reliever heading into the season, but he was too hittable for the Yankees and wound up getting dealt for a minor leaguer a couple of weeks ago. Since landing in Washington, he’s pitched very well and suddenly has holds in three straight appearances, so if you’re in a deep NL-only league that tracks that category, give him a look.

Deck McGuire, SP, Los Angeles Dodgers (ESPN: unowned; CBS: unowned): Two years ago the former Jays’ first rounder started showing flashes of brilliance at Double-A, but he struggled at Triple-A in 2014. Now in the Dodgers’ organization, McGuire is looking like a keeper league prospect again. He improved his hit rates at Double-A, earning a promotion to Triple-A, where homers have been a bigger issue, but haven’t killed his ERA (3.40). With LA scrambling for starting pitcher options, could McGuire be in line for a look soon?

Crave more in-depth Fantasy analysis? Then join us every Thursday at 9 p.m. EST for RotoRob Fantasy Baseball Weekly Podcast on Blogtalkradio as we entertain and edify you for an hour or more each week. Our guest this week once again in RotoRob.com MLB Editor Michael Seff. Tune in here.

By Michael Seff
Tags: Carlos Beltran
This entry was posted on Sunday, June 28th, 2015 at 11:08 pm and is filed under BASEBALL, Michael Seff, The Wire Troll. You can follow any responses to this entry through the RSS 2.0 feed. Both comments and pings are currently closed.