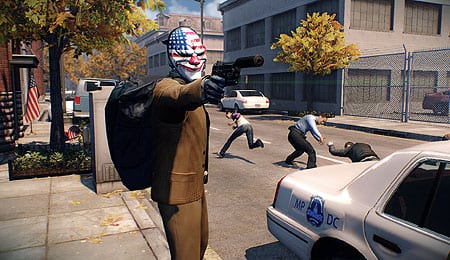 PAYDAY 2 is the long-awaited sequel to the former PSN exclusive, Payday: The Heist, which pits players versus law enforcement in a battle for riches and infamy. Developer Overkill Software and 505 Games have cased fans’ opinions of the first game and delivered a co-op experience that’ll have many gamers coming back for more in search of that big payday.

Fans of the first game’s console iteration may remember how slippery the controls were — it was certainly he biggest issue I had with the game. Thankfully, PAYDAY 2 has a much tighter feel all around. Aiming is now considerably less spastic, and previous issues with button-press registry are gone, making the game feel a bit more accessible to those in the Call of Duty or Battlefield crowds.

Other mechanics play out as one would expect: pull the trigger to fire, hit that button to jump, and then hit that other button to yell really loud at the person in front of you. You couldn’t really ask for anything more with the controls — they’re intuitive and drastically improved.

Although the graphics have been improved over the original, they won’t really wow anyone. Character models and their textures look sharp and, unless you encounter some of the animation glitches, they move realistically and believably. PAYDAY 2 does have some frame rate issues when cops start filling the screen or smoke effects happen, but it never drops to the point of being unplayable and never stutters for very long so it’s largely unnoticeable with how much fun is going on.

The game is also filled with little touches that are well done, such as the dilapidated meth house you’ll be cooking in to the grimy docks where you’ll be throwing bags of coke at one another. All in all, the graphics are solid, but there are definitely tighter visuals out there.

Now, on to my favourite part of the game. Aurally, the experience is amazing. Aside from the repetitive mission objective voiceovers, the sound is top notch. Characters voices are intimidating and well done, police chatter is realistic, and the gun sound effects have received some TLC as well.

The most standout thing, however, is the soundtrack. Simon Viklund composed one of the best video game soundtracks I’ve ever had the pleasure of listening to (I even bought it). While dub step/techno has been wearing thin on gamers, Viklund managed to create tunes that not only capture the manic pace of the game but are also completely enjoyable on their own. Mixed with the gunfire and hollering heisters it can easily get anyone amped up.

If you’ve played the first game the following sentence won’t surprise you: don’t play with the A.I. Being a game completely focused on the cooperation of four individuals, the A.I. just can’t stack up compared to a real person. They don’t carry loot bags, don’t drop ammo or health, and they don’t help the objective. So if you’re planning on doing some single-player heisting, you may just have to watch Heat alone.

Conversely, if you’re playing with friends, prepare for what is likely to become known as the go-to cooperative shooter (sorry Left 4 Dead and Borderlands). With communication comes cohesion, with cohesion comes completion, and with completion comes the payday.

Any mission undertaken during your criminal tenure (making meth, robbing a bank of its gold, doing a quick smash and grab at a jewelry store, etc.) will net you money in your offshore account and also grant you a bit of spending cash. Cash is used for everything. Even stuff unlocked after matches must be paid for, but it’s what makes the world go round I suppose.

Missions are broken down into days. On the last day of a mission comes a payday, when the payout is much greater than the days before it, and each player is presented with the opportunity to flip over one of three cards in order to unlock various items such as masks, gun parts, mask patterns, or even extra spending cash. Players can customize their characters with all of these things as long as they’ve got the capital to back it up.

In addition, you can enhance the difficulty of said missions by cranking up the risk level. If you do so the getaway driver may not show up on time, the helicopter pilot may be killed, or any other number of bad things could happen to your team during a heist.

PAYDAY 2 also features a deep skill tree governing four different archetypes: the Mastermind, who specializes in crowd control; the Enforcer, who is an all-essential wall of bullets; the Technician, who likes explosions; and the Ghost , doesn’t really like to be noticed. Each skill tree has a wide variety of useful talents, and you don’t have to strictly run one class (I’m currently running a Technician/Mastermind build, very fun!).

Usually things are simple — get the jewels to the van. Sometimes things are not so simple — make some meth while your boss looks up the recipe on Google. It’s always fun, though, and sometimes hilarious as some glitches make fallen enemies skyrocket to infinity or shoot across the street into parking meters.

Though the game had a rough start online — and what online game doesn’t? — PAYDAY 2 shows that quality gameplay can outshine any flaw you present a gamer. If you’re looking for a game that has that “just one more level” feel, PAYDAY 2 will have you staying up way too late, going to work with bloodshot eyes, and making you come back home to fire it up and do it all over again. 505 and Overkill have found the right combination here, and it definitely deserves a crack at anybody’s safe.

By Jeff Cater
This entry was posted on Thursday, August 29th, 2013 at 10:49 am and is filed under Jeff Cater, Video Game Reviews. You can follow any responses to this entry through the RSS 2.0 feed. You can skip to the end and leave a response. Pinging is currently not allowed.