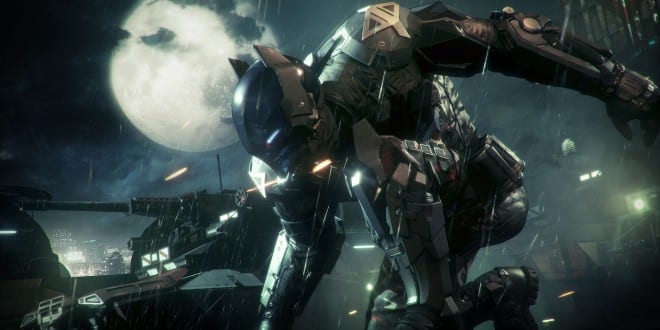 I should use more puns? Tanks for the advice… get it? Tanks?

A few years back, Warner Brothers let players beat the mean streets of Gotham as the one and only Dark Knight, Batman. Arkham City ended wide open, paving the way for a new entry in the series. In Batman: Arkham Knight, the World’s Greatest Detective once again faces off against a familiar stable of foes, and the blood pumping through your very veins may end up being the greatest enemy Batman has ever faced.

With Gotham evacuated by the threat of an extreme chemical agent by Scarecrow, you’ve only a city full of crime to stop. And Scarecrow isn’t acting alone, he’s got an entire army led by a fearsome new foe: The Arkham Knight.

Whether you’re gliding into a stealth takedown or fending off a mob of thugs, you feel totally in control of Batman. Combat is still largely dependent on timed pressing of the face buttons, while gadgets can be quickly activated with L2, and R1 lets you grapple to any given ledge to escape from danger or trick an enemy. Sneaking around is still a bit of a slip, because the movement speed between a neutral walk and the sneak is drastic, so you may accidentally wind up speeding right into a guard a few times rather than slowly stalking by.

All is really fine and dandy here until you start using the d-pad to access your gadget inventory, map, mission list, etc. Each direction corresponds to a menu that can be tapped to activate or held down to toggle, but damn us if we could ever remember which direction did what, especially when fighting a variety of enemies that require certain gadgets to get the upper hand on. Other than that, it’s a very tight feeling game that will let you feel the true power of The Bat.

Batman: Arkham Knight runs on the Unreal Engine 4, and needless to say it’s insanely beautiful. As rain blankets Gotham, it slowly saturates clothing and the environment. Seeing the rain slide hastily down Batman’s cowl and cape draws you deeper into the city than ever before. Light of various colour dots the cityscape and produces beautiful lens flare and reflections (not quite to J.J. Abrams levels, thankfully).

All of the characters, save for one, feature stand-out facial detail and animation, giving the criminals and innocents left in Gotham a slice of life unapparent in many games. The one character with terrible facial animation turns out to be none other than Batman himself, as each cinematic or dialogue sequence seems to portray him as having a stiff, broken neck.

He just stands there, nary an emotion in sight. Never does it tilt or emphasize dialogue correctly or engagingly, but fortunately this isn’t a game about Batman’s neck. This is a game about beating up the bad guys and locking them away, and Batman looks damn good while doing that thanks to an absolute lexicon of fight moves.

Fans will be pleased that Kevin Conroy returns to the fourth and final installment of the Arkham games, but there are a few moments when the voiceover feels simply uninspired. Troy Baker and Nolan North try their best to steal the show, but damn it, Mark Hamill crushed the part of the Joker here. The Joker’s constant nagging and taunting of “Bats” fit perfectly with the scary, still silence of the once-bustling Gotham. Various thugs around town are fun to eavesdrop on as well, constantly talking about how they’ve had a run-in with the Bat before and he “Ain’t so tough! I was sick that day.”

As the World’s Greatest Detective, you explore the deepest nooks and crannies of the city in search of a way to stop Scarecrow from releasing his fear toxin. This is a dramatic, emotional, sometimes terrifying story, fleshed out by appearances of many fan favourite characters and missions to complete for and against them.

You may hear a screeching in the sky off in the distance, and upon examination spot a giant pair of wings disappearing behind a building. Further investigation leads to the discovery of Man-Bat, and the sad story of Dr. Kirk Langstrom. The good doctor wanted nothing more than to cure deafness, which he found possible by combining certain segments of vampire bat DNA with that of a human. He made the ill-fated decision of testing his theory on himself, transforming into the vicious creature, murdering his wife, and flying through the city skyline until you intervene.

Perhaps you heard some very out-of-place opera music and discovered a hanging, mutilated body nearby, ripe for investigation. Maybe you’ve stumbled upon a roadblock set up by the militia. Maybe that rat Edward Nigma has crawled his way under your skin and you’re stuck on a riddle.

Whatever you decide to tackle provides a unique and fun challenge, except for what we believed to be a case of “Just Too Damn Many Riddler Trophies.” There are over 200 of them, and for a completionist you cannot obtain the true ending of the game until you’ve solved them all. They are fun, but there’s just too many of them stacked on top of pre-existing Riddler challenges.

You’ll often team up with one of several characters at a time, being able to switch between the two by pressing L1. This gives many hints towards future DLC; taking command of Azrael in his quest to impress Batman and eventually (maybe) assume the role of the Caped Crusader is a fun deviation with a possible open ending, and solving riddles as Selena Kyle with Batman at your side is a brilliant tease for some Catwoman-focused content.

With very minor issues aside, Batman: Arkham Knight is a thrilling, engaging conclusion to what could very well be considered one of the best series in gaming history. You’ll witness not only Gotham itself change, but temperaments and relationships of characters do the same as they give way to the threat of Scarecrow and his fear toxin.

By Jeff Cater
Tags: Arkham Knight, Batman, Video Game Review
This entry was posted on Thursday, July 2nd, 2015 at 7:38 pm and is filed under Jeff Cater, Video Game Reviews. You can follow any responses to this entry through the RSS 2.0 feed. Both comments and pings are currently closed.