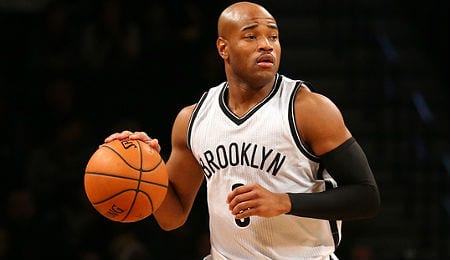 Welcome back to another week of Fantasy hoops. McCade is off this week, so The Wire Troll falls to your trusty editor. Kevin Durant is dealing with more injury issues; Jimmy Butler has been getting his shot off lately; and Corey Brewer has landed in Houston as part of a three-team trade.

Jarrett Jack, PG/SG, Brooklyn Nets (ESPN: 10.3 per cent; CBS: 25 per cent): Jack, slotted 28th in our Shooting Guard Rankings, has been a disappointment so far, not even playing at a top 50 level at the two. Playing exclusively off the bench, his three-point shooting has never been worse. However, Jack may have a chance to turn things around with Deron Williams leaving early Friday with a calf injury. Jack is the backup PG, and he stepped in to play a season-high 33 minutes, shooting well (6-for-11), canning a trey and picking up four boards, three dimes, a steal, a block and 13 points. If the suddenly struggling Nets lose D-Will for a spell, Jack will become a great pickup. And hey, let’s not forget Jack’s sweet alley-oop on Wednesday against the powerful Raptors (see video below).

Zach LaVine, PG, Minnesota Timberwolves (ESPN: 7 per cent; CBS: 46 per cent): We were surprised when the T-Wolves drafted another PG in LaVine last summer, but now that Ricky Rubio is out, it’s proving to be a wise pick. Even with Mo Williams back from his own injury, Minnesota has opted to start LaVine recently and the rookie is beginning to post Fantasy-worthy numbers. LaVine has been flirting with double-doubles, and his outside shot is starting to fall, with two treys on three attempts over the past two games combined. How about those three steals on Friday? Okay, so LaVine only dropped three dimes, but he was coming off a team-best eight-assist effort on Tuesday, so if you need a boost in helpers, this kid may be a fine short-term pickup while Rubio heals.

Luc Richard Mbah a Moute, SF/PF, Philadelphia 76ers (ESPN: 3.3 per cent; CBS: 12 per cent): In mid-November we recommended Mbah a Moute, but since then his ownership has only risen slightly despite the fact he sunk more buckets last month and is playing even more minutes in December. The former UCLA star’s scoring has dipped in last week or so, but he’s providing solid across-the-board production while regularly playing over 30 MPG. Playing on a Sixer team that craves veteran leadership, Mbah a Moute is enjoying a career season so far, even if his shooting touch has really suffered by not just getting his touches within the flow of the offense. Almost always a SF throughout his career, he’s been moved to PF by Philly and even as an undersized four, he has an advantage because of his mobility.

Andre Roberson, SF/SG, Oklahoma City Thunder (ESPN: 0.8 per cent; CBS: 4 per cent): Roberson has seen a lot more PT in the last couple of games, and responded with a double-double on Thursday and nearly another on Friday. He’s also flashed some fine defensive ability, holding Kobe Bryant to 3-for-15 on Friday. Should Durant (ankle) miss time, Roberson will really get an opportunity to shine.

John Henson, C/PF, Milwaukee Bucks (ESPN: 2.6 per cent; CBS: 16 per cent): Henson hasn’t played since late-November because of a foot woe, but he’s getting very close, and may even suit up Saturday. We pegged him as a bust this season, and so far we’ve hit the nail on the head as he’d been strictly coming off the bench and seeing very little PT despite his improved FG and FT shooting. The reason? Top rookie Jabari Parker was playing a stretch four. But now Parker (ACL) is done for the season and the Bucks desperately need Henson to step up and fill that void. Henson is travelling to meet the team in LA for Saturday’s game, and even though he remains questionable, we advise picking him up and stashing him for the time being.

Joel Freeland, Portland Trail Blazers (ESPN: 0.2 per cent: CBS: 1 per cent): A dude that’s really flown under the Fantasy radar so far, Freeland made his first start of the season on Friday, and while he only played 21 minutes, there was a lot to like about his performance as he shot well (3-for-4 from the field; 2-for-2 from the line), flirted with a double-double and swatted one. Most importantly, he seemed to give the Blazers a spark in a huge win in San Antonio, so it’s worth grabbing Freeland as a speculative pick to see if he sticks in the role.

By RotoRob
Tags: Kevin Durant
This entry was posted on Saturday, December 20th, 2014 at 1:58 pm and is filed under BASKETBALL, RotoRob, The Wire Troll. You can follow any responses to this entry through the RSS 2.0 feed. Both comments and pings are currently closed.