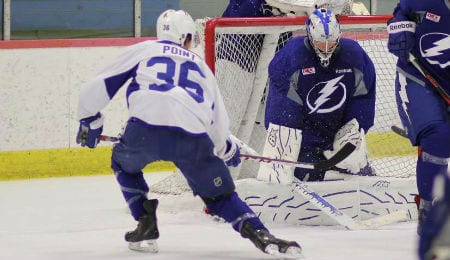 Goaltender Andrei Vasilevskiy has taken the NHL by storm. (Lightning.nhl.com)

There’s no question Vasilevskiy is ready to play in the NHL, but it could be a bit before he becomes a roster mainstay. With an injury to starter Ben Bishop, the young Russian was recalled to back up Evgeni Nabokov. The thing is, Vasilevskiy is likely already able to supplant Nabokov. It’ll be interesting to see how this goaltending controversy shakes out when Bishop makes his eventual return to the lineup.

Mark Scheifele, C, Winnipeg Jets (ESPN: 12.9 per cent; CBS: 47 per cent): The first ever pick by the newly re-established Winnipeg Jets franchise, Scheifele has only fairly recently developed into a reliable two-way option in the ‘Peg. He had a pretty solid Week 10, too, collecting two goals, four points, a plus-3 rating, two penalty minutes, a power play point, seven shots on goal, 10 face-offs won and a hit. Scheifele is also on track for a solid season, having scored six goals and 17 points in 33 games.

Troy Brouwer, RW, Washington Capitals (ESPN: 34.5 per cent; CBS: 37 per cent): Brouwer contributes to the Caps more as a meat and potatoes forward, but can be a decent source of secondary scoring for his Fantasy owners. Last week, Brouwer contributed two goals, a plus-3 rating, seven penalty minutes, a power play point, four shots on goal, 12 face-offs won and six hits. With 10 goals and 16 points in 32 games already, he’s on track for 26 goals and 41 points this season after scoring a career high 25 goals and 43 points in 2013-14.

Scott Gomez, C, New Jersey Devils (ESPN: 4.4 per cent; CBS: 4 per cent): After going unsigned this summer and partway into the season, Gomez is on a tear with his old team in New Jersey. Through 11 games, the Stanley Cup winner has two goals and seven points, including a goal, three points, a minus-2 rating, two penalty minutes, two power play points, 12 shots on goal, nine face-offs won and one hit in Week 10. It may still be a little early, but we could be looking at a major Fantasy sleeper in Gomez. Now when was the last time anyone has said that?

No. 1. Marian Gaborik, LW/RW, Los Angeles Kings: Welcome back, Gabby! The former third overall pick exploded with six goals, eight points, a plus-2 rating, four power play points, 15 shots on goal and two hits… remind us why we dropped him from our Fantasy team again? Don’t mind the sobbing coming from our NHL Editor.

No. 3. Marc-Andre Fleury, G, Pittsburgh Penguins: Fleury was nearly flawless in three games last week, allowing just three goals for three wins, a 0.99 goals against average, a .971 save percentage and one shutout. We know we’ll take it!

No. 1. Ilya Bryzgalov, G, Anaheim Ducks: The “Bryzly Bear” made his return to the NHL last week, and we couldn’t exactly call it an easy pot of honey. In two appearances, Bryzgalov was winless with a 6.44 goals against average and a .789 save percentage. Oh, brother.

No. 2. Jonathan Bernier, G, Toronto Maple Leafs: Bernier actually had a very solid week prior to Saturday’s seven goals against gaff (which was witnessed in person by lifelong Flyers’ fan RotoRob). In three starts, Bernier collected a win, a 4.28 goals against average and a .899 save percentage.

No. 3. Jonathan Quick, G, Los Angeles Kings: While Gaborik and Kopitar were scoring at will, Quick was struggling between the pipes. In four appearances in Week 10, Quick managed two wins, but posted a terrible 3.20 goals against average and a .867 save percentage. Sure, it was over four games, but his mediocrity was consistent. He’ll bounce back, don’t worry.

And that’s all for our coverage of Week 10. How did you do? Tell us in the comments section below.

By Dakota Case
Tags: Anaheim Ducks, Andrei Vasilevskiy, John Gibson, Minnesota Wild, Tampa Bay Lightning
This entry was posted on Sunday, December 21st, 2014 at 11:30 pm and is filed under Dakota Case, HOCKEY, The Wire Troll. You can follow any responses to this entry through the RSS 2.0 feed. Both comments and pings are currently closed.